Some leading Caribbean-based airlines continue to cut capacity on inter-island routes, deploying seats instead into what some executives see as high-growth markets in South America and elsewhere.

“Intra-Caribbean travel means very short trips [of] between 1h and 40min. And on those trips the government and airports tax small-distance operators the same as international operators,” he says. “The short travel is killed by taxes.”

In 2015, the total number of available seats carried on the roughly 30 airlines based in the Caribbean will inch up 0.5% year-over-year to about 17.4 million seats, according to Innovata data.

The data shows wide swings in capacity among different carriers.

For instance, available seats on Aerocaribbean, based in Havana, will decline about 45% year-over-year. Others, like Antigua’s LIAT and Saint Maarten's Winair, will carry at least 10% fewer seats this year than last, data shows.

But other carriers are rapidly expanding, among them InselAir Aruba, which will carry more than twice as many seats this year than last, Innovata shows.

That airline, a division of Curacao-based InselAir, began operating in 2013 and now serves roughly one dozen destinations, including Miami, several Caribbean islands and about eight cities in South America, according to FlightMaps Analytics. 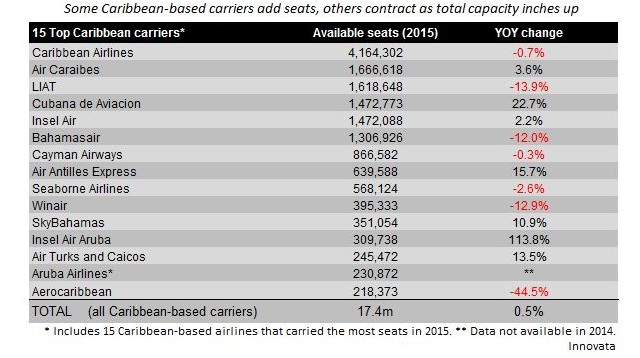 Despite slight growth, many carriers are cutting inter-island capacity, choosing instead to expand outside the Caribbean.

In 2015, carriers will offer about 12.2 million seats on intra-Caribbean flights, down 2.3% year-over-year, data shows.

The vast majority of those seats are carried on Caribbean-based carriers, although a few airlines like Air France, British Airways and JetBlue Airways also offer intra-Caribbean flights.

InselAir’s Kluyver says airfare taxes have made many short routes unprofitable, noting that many governments charge the same levies on $100 intra-Caribbean fares as they do against $1,000 fares to Europe.

Also, many of the islands’ governments have funded construction of modern, international airports, which are well-suited to accommodate widebody aircraft arriving from Europe, but overkill for inter-island turboprop operators.

“We don’t need all those fancy check-in counters, we don’t need airport bridges,” he says. “Airports are trying to attract international travelers [with] improved international facilities to the detriment of the regional airlines.”

But Kluyver remains optimistic, citing comments made by Bahamas Prime Minister Perry Christie, who formerly was chairman of the Caribbean Community, a 15-nation political group.

“That was the first time there was a clear message from the government,” says Kluyver. “There is some progress.”

Eduardo Iglesias, chief executive of the Latin American and Caribbean Air Transport Association (ALTA), says only a “few small steps have been taken towards overcoming” barriers to inter-island travel.

Those barriers, he adds, limit both tourism and inter-island business.

“Inter-island connectivity cannot flourish with the current visa requirements, high airport and tourism taxes… and the lack of a common objective of attracting and sharing tourists,” he tells Flightglobal. “In many cases, you can reach a neighbouring island or islands on a boat and return the same day, while if you wish to fly, you must first obtain a visa and then search for air connectivity.”

Some airports in the region have also been seeking to raise airport user fees, making them “highly uncompetitive in terms of attracting traffic”, he adds.

Meanwhile, however, many Caribbean carriers are looking outside the region for growth, with some focused on South America.

In 2015, Caribbean-based airlines will offer about 970,000 seats to South America, up about 21% year-over-year, according to Innovata data.

Both LIAT’s and InselAir Aruba’s capacity to South America will nearly double this year, while Cubana’s available seats to the continent will increase nearly 25%, data shows.

That growth comes despite economic problems in many of the continent's largest countries.

"The opportunities are still bigger than the economic problems,” Kluyver says, adding that he sees growth potential in “basically every city that has an international airport that is not well connected”,

“There are still some underserved markets in the Caribbean and South America," he adds.

Kluyver hopes by 2017 to acquire two Airbus A319s, aircraft that he says can reach most of South America from the Caribbean. The carrier's current fleet includes Boeing MD-80-family aircraft, Fokker 50s and Fokker 70s, according to Flightglobal's Fleets Analyzer database.

Caribbean-based carriers have also expanded this year to Europe and North America, though to a lesser degree than to South America.

Available seats to Europe on the three Caribbean carriers that fly to the continent – Martinique-based Air Caraibes, Cubana and Trinidad and Tobago’s Caribbean Airlines – will increase about 7% year-over-year in 2015, data shows.

However, the trend could reverse in 2016 due to Caribbean Airlines’ decision to end its three-times weekly flights from Port of Spain to London’s Gatwick airport.

Caribbean has said it will divest the two Boeing 767-300ERs it uses to operate the route, calling the aircraft too costly to maintain.

Meanwhile, available seats between the Caribbean and North America continue to increase, although much of the gains come from carriers based in the USA and Canada.

Combined capacity from the Caribbean to Canada will increase 13% year-over-year in 2015, to 3.3 million.

Caribbean airlines will carry about 330,000 of those seats, about 50% more than last year thanks largely to Cubana’s additional service to Toronto, Innovata data shows.

Likewise, combined capacity from the Caribbean to the United States will increase about 5% this year to 18.2 million seats, with JetBlue Airways’ capacity on the routes climbing 8% and Delta Air Lines’ capacity up 6%, according to Innovata data.

Caribbean-based airlines will carry about 1.4 million of those seats to the USA, roughly the same number they carried in 2014, data shows.

ALTA’s Iglesias says the growth of US carriers in the region has been at a “faster pace in the last two years”, likely due to the strength of the US dollar, which has generated more demand from American vacationers.

“Caribbean carriers can benefit from this increase in demand coming from the US in a lesser degree, but they lack the connectivity… that several US airlines enjoy from their hubs,” he says.