General aviation in China has existed on a minimal scale for decades. Little interest has been shown in this niche sector by the ruling party and the aerospace sector, resulting in a limited indigenous aircraft manufacturing base, a small installed base of light aircraft – mainly serving the agricultural and pilot training markets – and around 200 airports, which are dominated by the country’s airlines and military.

Over the last five years, however, China’s attitude towards GA has undergone a transformation. This vast country is now seeking to become not only a major user of light aircraft but a key player in the manufacturing of GA types. So what has triggered this change in attitude?

According to Ed Smith, senior vice-president of international and environmental affairs for the General Aviation Manufacturers Association (GAMA), the devastating earthquake in Sichuan province in 2008 marked the turning point for GA in China.

“It was one of the deadliest earthquakes in its history [claiming around 70,000 lives] and yet the government was helpless,” he says. “Unable to access the devastated towns and villages due to the poor roads and a shortage of suitable aircraft, China was forced, for the first time in recent memory, to ask for international assistance to help with the recovery effort,” Smith adds.

His view is supported by Roger Whyte, aviation expert and former senior executive with leading GA aircraft manufacturer Cessna. “China did not have enough resources of its own to cope with this situation. Once the rescue and relief effort was in full swing, however, China soon realised how versatile and indispensable GA aircraft could be. They then set about building their search and rescue [and medical evacuation] capability,” he says

In an effort to boost the fleet even further, the government began to offer financial incentives to encourage owners and operators to buy GA aircraft that could be used in a crisis, Whyte adds. This practice continues today.

The impact of the legislation is reflected in the growth of light aircraft fleet numbers for the country. According to GAMA, China’s fleet of piston singles and piston twins climbed from 807 in 2012 – the first year it lists the country’s fleet data – to 890 last year, and this inventory is expected to continue on an upward trajectory.

China’s ambition to mobilise and beef up its mediocre GA industry and infrastructure was laid bare in its 12 five-year plan – published in 2012 – which builds on this momentum.

“When the Chinese government puts it in writing, they mean business,” says Smith.

These expectations are set against a backdrop of economic prosperity and regeneration across China’s provinces for the period of the plan ending in 2017. “Civil aviation market demands will grow more vigorously. The independent innovation capabilities of China will be improved. There will be more high-tech products and products with high added value ‘made by China’,” says the report.

“The five-year plan is a signal that the government will support anyone who gets into general aviation,” Smith says.

“As such there has been fierce competition within the provinces to set up manufacturing centres of excellence – a Wichita of China, if you will,” he continues. 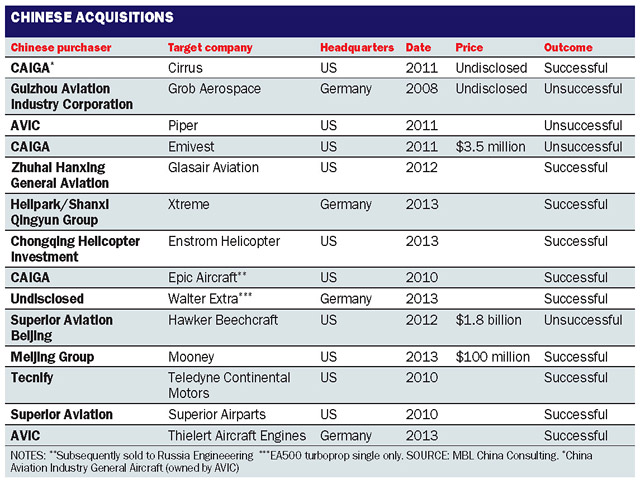 US and European manufacturers have been the target of Chinese buyers – consisting of established aviation companies such as AVIC, wealthy investors seeking a fresh venture and provincial governments looking for new opportunities: “Over the years we have received a number of cold calls from Chinese provincial governments asking if we know of any GA companies that are up for sale,” says Smith.

There have been numerous. The financial crisis of 2008 hit the global general aviation industry hard. Many companies, notably in the traditional markets of the USA and Europe, saw their sales plummet, leaving them vulnerable to a buy-out. US companies Cirrus, Glasair, Liberty Aerospace, Mooney, Teledyne Continental and Enstrom were all snapped-up by Chinese companies. So too were German companies Grob, Thielert and Xtreme.

Other manufacturers have joined forces with Chinese companies in the hope of boosting sales of their aircraft within the country. 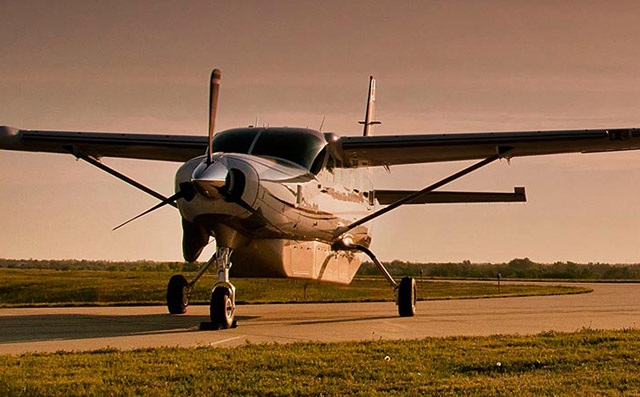 Cessna established a joint venture with CAIGA in 2012 to build its ubiquitous 208 ­Caravan in Shijiazhuang, in northern China’s Hebei province, for the Chinese market.

Deliveries of the single-engined turboprop began in 2013.

Austrian airframer, Diamond, made its foray into the Chinese market in 2005 through a $42 million joint venture with Shandong Bin Ao Aircraft Industries, based in Shandong province. The partnership is building DA40 TDI piston singles under licence for the Chinese market and other “selected Asian countries” from its 30,000m² (320,000ft²) facility. Diamond says it has built 130 aircraft to date and has orders for another 40 DA40s. Much of the demand for its diesel-fuelled aircraft is coming from the country’s pilot training schools, which are feeding the hungry Chinese airlines. “The flight schools are driving a lot of demand for light aircraft in China,” says Peter Merker, founder and chief executive of MBL China Consulting. To illustrate his observation, he points out that China’s eight schools have a combined fleet of only 328 aircraft and training capacity for over 2,100 pilots.

“Flight training is a steady but growing market in China,” he says. 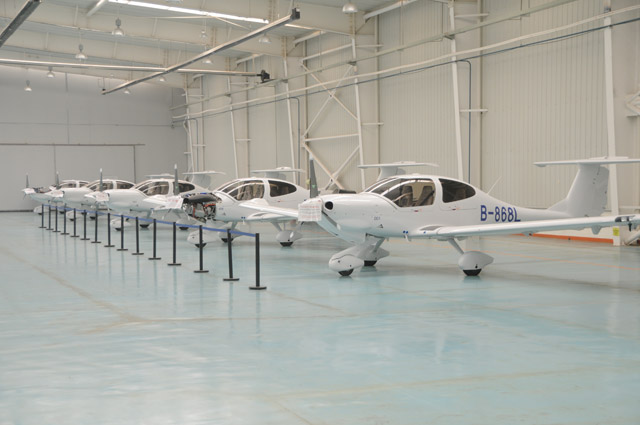 Diamond has built 130 DA40 TDIs to date in Shandong province

Beijing-based MBL brokers deals between Chinese, European and US companies. MBL is currently assisting in the sale of Germany’s Extra Aircraft to an undisclosed Chinese buyer and helping to transfer production of the EA500 single-engined turboprop to China. MBL says it has also assisted in the sale of a “complete business jet programme” to a Chinese buyer, although it is unable to disclose the identity of either party due to the signing of non-disclosure agreements.

Merker says MBL attempted to broker acquisitions between Europe and China around a decade ago. “For the first eight years we failed completely,” he admits. “The market simply hadn’t opened up.”

Within the last three years, however, the environment has shifted greatly, thanks to the government’s directive to open up the general aviation market. “There are a lot of aviation companies and entrepreneurs who see this industry as exciting, worthwhile and a potentially lucrative business,” he continues.

“There was and continues to be a desire to buy established companies with proven designs and technologies. These tend to be ­located in the traditional markets of the US and Europe.”

Aviation analyst Brian Foley says the swoop on established brands such as Cirrus, Continental and Enstrom happened when the general aviation industry was at its most vulnerable.

“Issuing a national directive to grow GA in 2009 and 2010 was a shrewd move by the Chinese,” he says. “Their economy was doing well – in contrast to the USA and Europe – so rather than start their aircraft manufacturing companies from nil, buyers were able to leap into the GA field by snapping up established brands and technologies with the help of generous government subsidies,” Foley continues.

He argues that some bids made by Chinese buyers were designed to fend off rival suitors. “[CAIGA] paid a premium for Cirrus, for example. Many Western businesses were unable to make a counter offer. They were simply priced out of the market,” he says.

Foley believes the rush to snap up struggling GA companies led to a “disjointed foray” into the market for China.

“There has been a lack of coordination between the ­buyers, some of whom have purchased competing companies, Cirrus and Mooney for ­example,” he says.

For these struggling airframers, however, the Chinese buyers provided a much-needed lifeline and their subsequent investment in the companies helped to secure their long-term future.

Kerrville, Texas-based Mooney – builder of the Acclaim and Ovation family of high performance piston singles – was snapped up by Zhengzhou-based real estate development company Meijing group last year, after the financial crisis forced it to close its doors in 2008. With a new management structure in place, the airframer is poised to restart ­manufacturing, although the product ­offering is likely to be reduced. 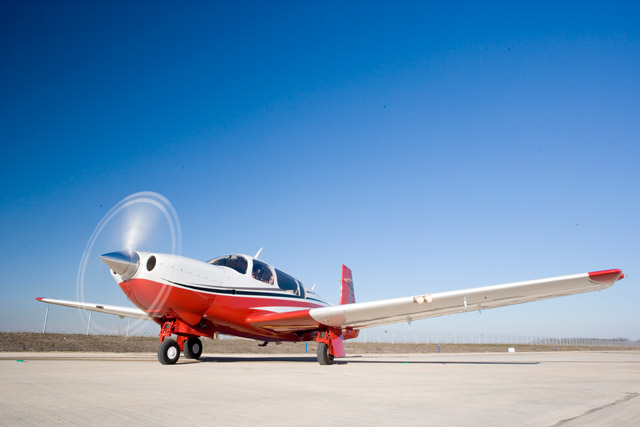 Mooney was snapped up by Meijing group last year

CAIGA has invested heavily in the Cirrus product line since acquiring the Duluth, ­Minnesota-based builder of the SR20/22 ­piston singles and the Vision SF50 personal jet in 2011.

“CAIGA has committed $100 million to bring the SF50 personal jet to market,” says Cirrus senior vice-president Todd Simmons. Before the CAIGA acquisition, Cirrus was working on the aircraft at a low level, due to a lack of funding. “CAIGA has really stepped up,” says Simmons.

The first conforming protptype made its first flight on 24 March “and we expect to deliver the first Vision in the second half of 2015,” he adds.

While manufacturing will remain in the USA, CAIGA has not ruled out setting up a second manufacturing base in China to service its home-grown customers. “It is prohibitively expensive to build an aircraft in the USA and ship it to China,” Simmons says. “So it would be a reasonable to say that aircraft sold to China will be built in China.”

Some observers are confident that China will eventually become one of the leading markets for GA aircraft.

“The government is targeting economic growth of 7.5% over 2014 and this will lead to increased domestic spending and capital investment in new companies. This bodes well for GA,” says Whyte. He compares the growth of China’s GA market with the rise of its automobile industry. “It’s now the largest in the world, producing 20 million units a year. If you would have told me that it would grow to be that size a few years ago, I would have laughed,” Whyte adds.

As the demand for GA aircraft rises, the government has now turned its attention to the country’s inadequate aviation infrastructure. “There is no point having a large GA fleet if you can’t support it and give people the freedom to fly without onerous restrictions,” says Foley. There are around 150 civil-use airports across China, compared with over 5,000 in the USA. The airspace is also heavily controlled by the military.

“It’s going to take time to change,” says Merker. “The investment and the will is there to develop the infrastructure to support the growing industry. For example, another 500 GA airfields are planned,” he adds.

Merker cites a document issued in November last year by the Chinese army and the CAAC which sets out their plans to open up low-altitude airspace in China.

The new rules lift the requirement to obtain advance flight mission clearance for many GA flights, although approval is still required for flights in certain places, such as border areas and prohibited zones.

“This is one of the most important policy measures for some time,” says Merker. “It will make great contribution to the liberalisation of low air spaces and to the development of general aviation in China.”

Restrictions have been lifted initially for flights below 1,000m (3,280ft). Operations above this level remain limited to certain routes that are largely dictated by the Chinese military, although the plan is to eventually loosen the restrictions on operations up to 3,000m.

GAMA’s Smith says that while the government should be applauded for their willingness to ease the restrictions, the current reforms – covering flights of 1,000m and below – are still fairly restrictive and benefit only a few operations, such as those involving helicopters, emergency flights and flight training.

Foley agrees: “This is a cute offer, but it’s practically unusable,” he says. “Within China airspace, the military is number one, followed by the airlines and then lowly GA.”

“The situation is improving in dribs and drabs as the government has begun to appreciate the important role GA plays in a developing economy,” adds Foley.