Airbus is showcasing its latest widebody, the A350, again at Farnborough this year and is progressively building the big twinjet’s in-service experience. 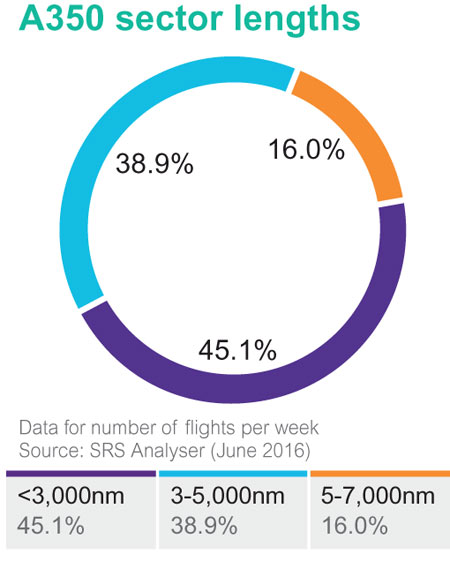 On the eve of the show, Ethiopian became the seventh A350 customer to take delivery of the Rolls-Royce Trent XWB-powered twinjet. The first A350 was handed over in December 2014 to Qatar Airways and by mid-year, some 26 aircraft had been delivered to customers.

The A350, which made its first Farnborough appearance two years ago, is now in service with seven customers across five continents – Europe, Asia, Latin America, Africa and the Middle East. Flight Fleets Analyzer shows that more than half of the 26 aircraft in airline operation are with Asia-Pacific and Middle East airlines, with each region accounting for one-third of the total fleet. 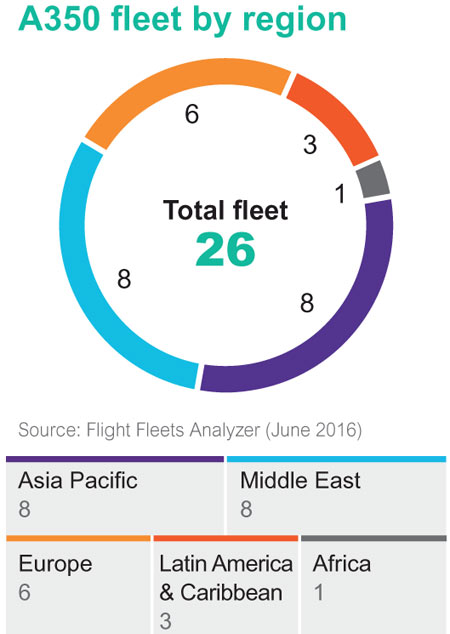 Airbus tells FlightGlobal that by the end of May 2016, the in-service fleet had accumulated just over 55,200 flight hours and almost 9,400 cycles.

The A350 fleet’s operational reliability has been running at 97.8% over the three months to May, said executive vice-president for programmes Didier Evrard at an Airbus briefing in late May. He added that the level has been increasing since the beginning of the programme. “We’ve had a number of small issues, but no big issues,” he said.

Analysis using SRS Analyser, which is powered by FlightGlobal schedules data, shows that despite only being in service for around 18 months the A350’s route profile already reflects a mature operation.

The latest operator, Ethiopian, took its first A350-900 on 28 June and almost immediately operated the type on a service from its Dar es Salaam base to Lagos. The other recent new recipient, Cathay Pacific, is flying its single aircraft on relatively short routes within Asia to build experience on the type. Initial destinations from Hong Kong are Manila and Taipei but it plans to expand the network from September with London Gatwick and Düsseldorf its initial long-haul destinations.

Qatar Airways is the fleet leader in size and network, operating its eight aircraft to nine destinations from its Doha hub. According to the airline’s chief executive, Akbar Al Baker, the Qatar fleet should have reached double figures but three aircraft have been delayed due to “delivery issues”. 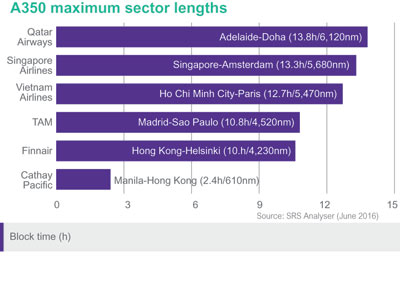 Speaking in early June, Al Baker declined to elaborate on the specific cause, saying “there was a big disconnect between our production oversight team and the Airbus team. He added that “contractually” Airbus is due to deliver “nearly 10” A350s this year and as of June had received none so far.

Qatar’s A350 destinations include Amman, Boston, Dubai, Frankfurt (the type’s inaugural route), New York, Munich, Riyadh, Singapore and Adelaide. The inbound service from the latter destination is the longest A350 sector currently operated, at 13.8h/6,120nm (11,300km). Qatar’s delivery delays have forced it to put back launching flights to Auckland and also to reduce some frequencies on other services.

“If you drill down into the detail, it reveals that A350 operators are currently flying their aircraft either on short-haul routes – less than 1,600nm – or long-haul sectors - ie more than 3,200nm,” says Henk Ombelet, senior analyst with Flight Ascend Consultancy. 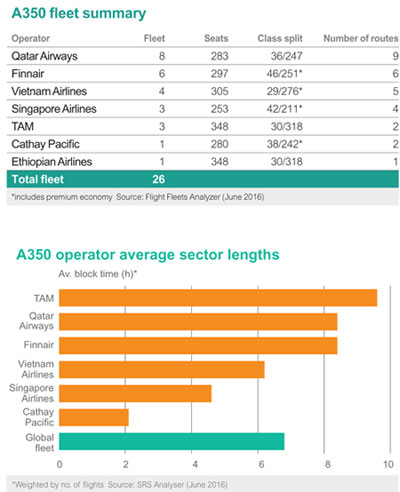 “There’s very little medium- to long-haul flying at the moment. For example, there aren’t any North Atlantic flights. The twinjet’s route profile is concentrated on longer services, for example Europe-Asia or Middle East-North America,” he adds.

“That’s because the less efficient types are still flown on the medium routes. As these older aircraft continue to be phased out and fuel price potentially increases, we would expect the A350 to have a similar deployment to the 777, with operations more evenly distributed towards medium- to long-haul and long-haul.”

While the A350 fleet’s overall average sector length is 6.8h (weighted by number of flights), SRS Analyser shows that the average by operator varies widely. TAM leads the way on 9.6h, followed closely by Qatar Airways and Finnair, each on 8.4h.

Cathay’s single aircraft is averaging flights of just 2.1h for the reasons stated earlier. However SIA’s average flight-time is relatively low at 4.6h, given it has one very long stage length. This is because other than the 13.3h Singapore-Amsterdam sector, its other A350 destinations are all within Asia: Jakarta, Hong Kong and Kuala Lumpur.

Flight Fleets Analyzer shows that maximum accommodation among the seven operators ranges from as low as 253 seats (SIA) to as dense as 348 seats (TAM). None of the current A350 operators offers first class, although all incorporate a business-class cabin. Finnair’s A350s have the most, at 46 seats.

As Airbus works to overcome production issues and ramp up A350 production this year towards its target of 50 deliveries in 2016, the fleet maturity and network expansion should continue apace. The next new operator will be Thai Airways International, which is due to receive its first aircraft in the second half of July. The airline will configure its A350s with 321 seats including 32 business-class and 289 economy.