Another blue sky day in Marseille. No clouds mar the horizon, but a stiff breeze whips across the airfield, snapping out the bright orange safety tags attached to the helicopter’s rotorblades. The yellow-liveried aircraft – and its sister ship parked inside the nearby hangar – is an EC175; “the first brand-new product in more than a decade” for manufacturer Airbus Helicopters.

Accordingly, the handover event on 11 December – nearly five years to the day since first flight and two years later than planned – marked a hugely important step for the airframer.

Inside the hangar it was all smiles and handshakes. Assembly line workers and programme chiefs past and present mingled with representatives from the customer Noordzee Helikopters Vlaanderen (NHV), including its pilots, technicians and even financiers.

After the usual round of speeches, Eric Van Hal, the boss of NHV, and Guillaume Faury, his counterpart at Airbus Helicopters, posed for photographs in front of one EC175. And, as is custom, Van Hal signed a page of a thick, lectern-perched tome the airframer keeps specially for these occasions. His message: “First step into a new exciting chapter in our story.”

For Ostend-headquartered NHV, the delivery should mark the beginning of an ambitious plan, targeting growth of around 25-30% in 2015 alone. It has orders for 16 of the new-generation rotorcraft in place, and intends to have taken at least half by the end of the coming year. Van Hal views the 7.5t EC175 – which will see its maximum take-off weight rise to 7.8t by 2016, offering more payload or range – as the perfect platform for around 80% of missions in the North Sea. With capacity for 16 passengers, he thinks it will take work away from heavier helicopters like the EC225, which although transports three more people, also carries at least an additional tonne of empty weight, according to the manufacturer’s figures.

“Everybody is always looking for something bigger, it’s a typical male thing,” says Van Hal. “But the oil companies are listening to what we are saying, that [the EC175] is more modern, safer and cheaper.”

Such is Van Hal’s confidence in the EC175 that NHV intends to use it to open a new base in Aberdeen in mid-2015, despite having yet to secure any contracts to operate from the Scottish site. 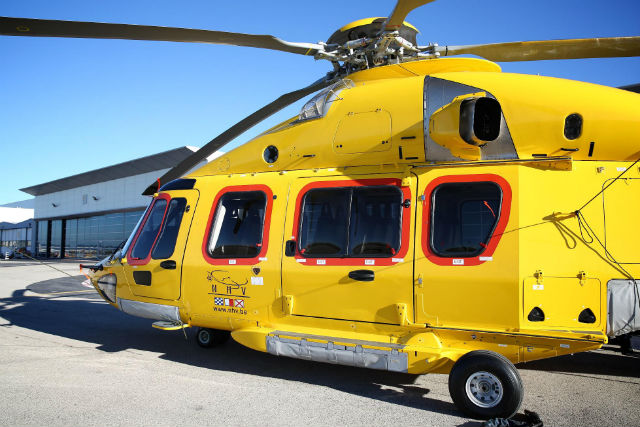 Although it received its first helicopters later than planned, Van Hal remains realistic about the situation. “If you are launch customer for a new product then you know there will be delays. It was longer than we thought, but we had good reassurances from Guillaume [Faury],” he says.

The delay, however, did mean that any plans NHV had for growth in 2014 were put on ice. And while declining to give details, Van Hal indicates that a compromise agreement on additional costs incurred has been reached with Airbus Helicopters.

Van Hal was likely referring to NHV when he talked about a “new exciting chapter”, but his words could equally apply to the manufacturer as well as the operator.

For Airbus Helicopters, beginning the delivery phase of the EC175 programme is a crucial step. A two-year delay – caused by a complex certification process, internal resource issues and a change of leadership at the top of the company – is not unheard of, but nonetheless problematic. Sales have been modest in the interim, particularly against the rival AgustaWestland AW189.

And, in the meantime, the previously benign outlook for commercial helicopter sales – once as cloudless as the Marseille skies – seems overcast.

In fact, Faury warned an Airbus Group investor conference the day before the handover of the EC175 that in 2014 the civil and parapublic market had experienced an unexpected “downturn” of around 15-20% against 2013, and that “we are considering this a trend for the next one to two years”.

What this means, he says, is that “the former generation [of helicopters], the ones which are the cash cows today, are bringing less profitability than we were expecting”. As a consequence, the current “phase of deep renewal” of its product line assumes ever-greater importance.

But even then, its next-generation helicopters are not immune from short-term market volatility. For instance, Russian airline and helicopter operator UTair is a big customer for the EC175, with 15 firm orders and 15 options. Airbus Helicopters hopes to deliver the first of these before the end of 2014, but with the rouble tanking and Russian economic growth following suit, it has no clarity on the pace of further deliveries. Faury describes the situation in Russia as “fast evolving”, and says the manufacturer is in regular contact with the operator “to find appropriate delivery dates for them”.

Assuming the UTair handover goes ahead, Airbus Helicopters will still meet its target of three deliveries in 2014 – albeit to two operators rather than three as initially planned, as Héli-Union had pushed its initial example into 2015.

And although oil and gas customers are reining in expenditure on the back of tumbling crude prices, Faury sees the operating cost advantages presented by the EC175 as offering “an opportunity to address the new challenges in the oil and gas market”.

But with total orders only amounting to 64 helicopters – of which only around two-thirds are firm – the airframer needs to get selling, or planned rate rises will have depleted the EC175’s backlog by 2017.

There is the temptation to view first delivery as the end of the story, but ensuring the longevity of the programme is a “new exciting chapter” all of its own.