This month’s Langkawi International Aerospace & Maritime (LIMA) Exhibition was an unlikely venue for the birth of a new airline, Flymojo, and its letter of intent for up to 40 Bombardier CS100 aircraft.

Despite the ripples the Flymojo story made in

As Razak approached – along with the transport minister and his deputy - there was a good deal of frantic running about as journalists and ministers’ flunkies filled the area. Razak took the stage, witnessed the Bombardier/Flymojo agreement, received an aircraft model, posed for a photo, and departed, followers in tow. It was over in minutes.

Apart from Bombardier’s statement about the LOI, which covers 20 firm orders and 20 options for CS100 aircraft, and a brief media engagement by Flymojo managing director Janardhanan Krishnan, little is known about the new carrier.

In a brief discussion with journalists after the event, Krishnan declined to comment on the carrier’s ownership structure, only saying that it is “100% privately owned by Malaysians.” A core management team is in place, and hiring of other personnel is due to commence before long.

Krishnan revealed to Flightglobal that the carrier will intially start operating with three leased CRJ aircraft (although he did not specify which variant) in the third quarter of 2015. It hopes to add the CS100s to its fleet next year, operating from two hubs: Johor Bahru’s Senai Internatonal airport and Kota Kinabalu. The carrier will serve both domestic and international routes. 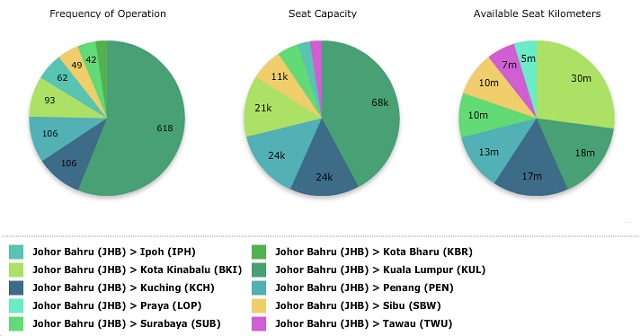 Krishnan noted that a great deal of investment has gone into Johor in recent years, creating demand for more air service, and Kota Kinabalu is also enjoying strong growth.

Flightglobal’s CapStats database shows that overall capacity, as measured by seats, has grown at both airports since 2005. Over the last decade, outbound Johor Bahru traffic grew 9.4% annually to 1.7 million seats in 2014, while Kota Kinabalu’s capacity grew 4.2% annually to 4.7 million seats.

Much of this growth has been driven by low-cost carrier AirAsia, which dominates traffic at Johor. Outbound traffic at Kota Kinabalu is roughly divided between Malaysia Airlines and AirAsia. The key route from both cities, by a large margin, is to the nation’s capital,

The 120-seat CS100’s 2,950nm range means that, flying from Johor, the new carrier will be able to reach all of India, North Asia up to Seoul and Beijing, and the western half of Australia.

From Kota Kinabalu, the carrier will be able reach

That said, early on the new carrier is most likely to follow the footsteps of Malindo Air, by launching domestic services from Johor and Kota Kinabalu to Kuala Lumpur, before eventually looking to expand further abroad. 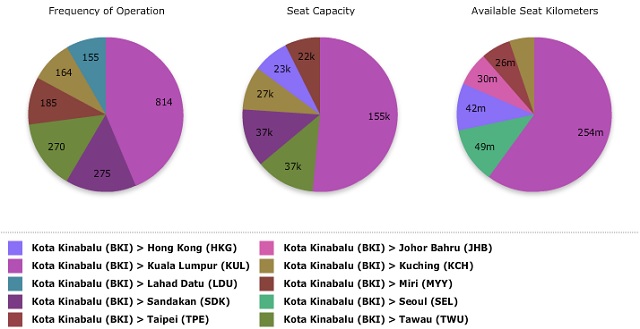 Shukor Yusof, founder of aviation advisory firm Endau Analytics, is dubious about the prospects of the new carrier. He says that international travellers in Johor tend to use Singapore’s Changi for international services. He adds that it is quite challenging for Singaporeans to get over to Johor to catch flights at Senai. He says the carrier will need deep pockets to grow, and that even in the world of cheap oil it is very expensive to run an airline.

“They will really need to get exactly the correct pricing and destinations that are appealing to make this work,” he says. “This is a new airline with an unproven aircraft.”