Montreal’s aerospace industry cluster has good reason to celebrate. First came Bombardier’s recently announced CSeries orders, then news broke in May that Bell Helicopter is transferring production of its 505 Jet Ranger X to Mirabel, near Montreal.

Meanwhile, Héroux-Devtek will soon deliver to Boeing its first 777 landing gears, and Pratt & Whitney Canada is preparing for entry into service of its new PW800 powerplant.

“Pratt Canada is doing the right thing with the PW800. Bombardier is succeeding against the odds, and Héroux-Devtek is moving upstream. This is a cluster that’s finally doing well,” says Richard Aboulafia, vice-president of analysis at consultancy Teal Group. “Things are looking up.”

The roughly 200 companies in Montreal’s aerospace cluster employ some 40,000 workers and generate about C$15.5 billion ($11.8 billion) in annual sales, according to trade group Aéro Montréal.

The sector has about 185 small- to medium-sized companies and four OEMs: Bell, Bombardier, CAE and P&WC.

But the recent run of good news follows several years of downright bad news, as OEMs cut staff and smaller suppliers sought to adapt to an increasingly global supply chain.

Look no further than Bombardier. Canada’s headline airframer, which employs some 14,000 aerospace workers in Quebec, largely bet its future on the next-generation CSeries despite a lack of orders so conspicuous that many observers suggested the project could sink the nearly 75-year-old company.

As recently as January, Bombardier had only about 240 orders for the CSeries. The type is expected to enter service with Swiss in July, two-and-a-half years late. High-profile setbacks included a 100-day grounding in 2014 due to a low-pressure turbine failure in a PW1500G geared turbofan.

And other projects suffered as Bombardier dumped money into CSeries, says Aboulafia. Bombardier failed to re-engine its CRJ series of regional jets, even as Embraer updated its E-Jets and Mitsubishi Aircraft developed its MRJ, both powered by P&W’s geared turbofans, he notes.

In May 2015 Bombardier announced it would slow production of its Global 5000 and 6000 large business jets to between 50 and 55 aircraft annually, down from about 80 aircraft. 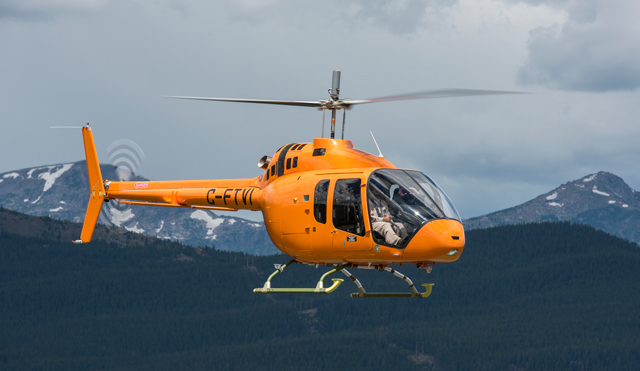 As a result of the slowdown, which Bombardier attributed to declining business jet margins, the company said it would cut 1,750 jobs.

“That was a complete surrender at the top end of the market,” he notes. “The CSeries starved Bombardier’s business jet division of cash for new product development. It allowed Gulfstream to grab the number-one spot.”

The Global slowdown rippled through Montreal, affecting companies like Sonaca, a Belgium-based tier one supplier of slats and other aero structures.

Those products are found on aircraft including Bombardier’s Global jets, Challengers, CRJs and Q400s, as well as several models of Embraer E-Jets and the Phenom 300. Sonaca also makes slats for Airbus aircraft, but that work is done outside Canada.

Sonaca’s production of Global wing skins in Montreal has recently slowed, mirroring Bombardier’s production slowdown, says vice-president of strategies and business development Paul Stafiej: “Bombardier has lost a lot of their market share to the likes of Embraer and Gulfstream.

“With some of the downturn with Bombardier, we have had a lot of cuts on our programmes.”

In response to the slowdown, Sonaca seeks to expand in the US by purchasing a US-based integrator with at least C$50 million in annual revenue. “We are actively looking for a US presence,” says Stafiej. ”The priority would be to have a company that is already Boeing-approved and that has Boeing as a customer.”

“It is very, very hard to get into Boeing,” he adds.

Sonaca recently submitted two quotes for 777X work and hopes to supply Boeing with components for a 757 replacement, should Boeing move forward with that project, Stafiej adds.

“We are looking very strongly both at Airbus and Boeing to get into the commercial market to compensate for some of the downturns,” Stafiej says. “We are keeping our fingers crossed.”

Bell Helicopter’s Montreal unit is another big-name player that has faced uncertainty in recent years. The Textron subsidiary produces the 206, 407, 412 and 429 in Mirabel, and has outstanding orders for more than 340 aircraft, according to Flightglobal’s Fleets Analyzer database.

But in recent years Bell has decided to assemble the single-engined 505 Jet Ranger X, which is expected to be certificated this year, in Lafayette, Louisiana. Likewise, it planned to build the twin-engined 525 Relentless, which is scheduled to enter service in 2017, in Amarillo, Texas.

“We needed really to be critically competitive on the price,” Bell president Cynthia Garneau said of the 505 in April. “Louisiana brought forward a business proposal that really met the business requirements.”

Garneau concedes the helicopter market has been challenging, and in recent months the company has confirmed plans to lay off several hundred Mirabel workers. Bell currently employs about 950 in the region, down from about 1,485 two years ago.

“The market really, of course, right now is challenging,” she says. “We need to let the market come back.”

Based in Saint-Laurent near Montreal, CAE manufacturers 70% of the world’s full-flight simulators, trains commercial and military pilots and has a small but growing healthcare simulation business. It employs about 8,000 staff worldwide and earned gross profit of C$696 million ($544 million) in fiscal year 2016, up 15% year on year. Still, CAE has cut staff. It now employs about 3,150 workers in the Montreal area, down from as many as 4,000 in recent years, according to Aéro Montréal.

Competition comes from New York-based FlightSafety International and South Carolina-based Tru Simulation and Training, which has made notable recent inroads.

Formed by parent company Textron in 2014 with the merger of Montreal-based Mechtronix and Florida-based Opinicus, Tru in April announced a high-profile deal to manufacture 777X simulators for Boeing. Two years earlier the company won a contract to supply Boeing with 737 Max simulators.

Lockheed Martin Commercial Flight Training is another rival, but in February CAE announced that it had reached an agreement to acquire that operation; the deal has not closed.

CAE also seeks to expand its commercial and military pilot training services, and is looking outside aviation, focusing on health care simulation. Like pilots, doctors can use simulation technology to practise procedures. A CAE spokesperson says improved medical training can drive down insurance and malpractice lawsuit costs: “The whole medical world is looking at civil aviation, and nobody else than us can actually bring that to the table.” 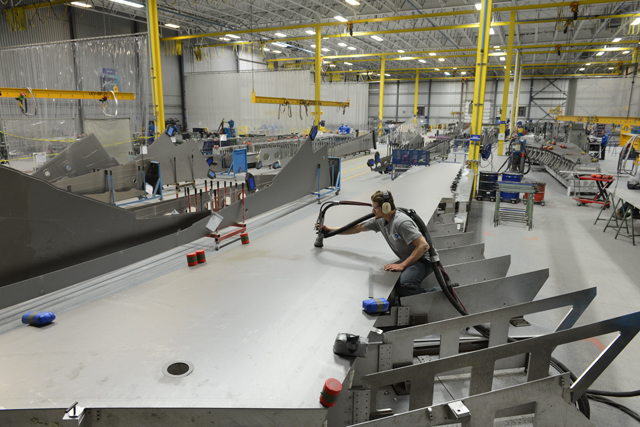 Many of Montreal’s smaller aerospace companies have also struggled recently as OEMs such as Bombardier began working more with overseas integrators. Industry observers note that OEMs have looked overseas in part because Montreal has so few integrators. “There’s an absence of tier one integrator capability, and a lot of tier three guys are trying to figure out what to do next,” says Aboulafia.

One response has been to help small companies establish business relationships with overseas companies, a first step to gaining a share of the supply chain, says Aéro Montréal president Suzanne Benoît. The Quebec government has also invested millions of dollars in programmes that help smaller aerospace companies develop next-generation technology, she adds.

“We have to help them internationalise themselves. This is a big issue for them,” says Benoît. “When the time comes for Boeing, Airbus, Bombardier and Embraer to source, we will have the technology.”

Challenges aside, the state of Montreal’s aerospace sector suddenly looks much brighter. Again, look no further than Bombardier, which executed a notable turnaround in recent years.

Then in 2015 Bombardier received a massive financial lift when the government of Quebec agreed to invest $1 billion in the company in exchange for a 49.5% CSeries stake.

Then, finally, Bombardier in April announced the type of “marquee” CSeries deal executives long insisted was coming – a firm order from Delta Air Lines for 75 CS100s, with options for 50 more. “I don’t think we can understate just how important new management has proved to Bombardier over the last year,” says Aboulafia. “If it weren’t for new management, they would be dead. If it weren’t for an awful lot of government assistance, which was by no means preordained, it would probably be game over.”

Good news for CSeries is also good news for P&WC, which manufactures the CSeries’s PW1500G geared turbofans at facilities near Montreal. But P&WC has other important programmes that are just getting airborne. The company is preparing for entry into service of its PW800 business jet turbofans, which share the geared turbofan’s core.

The PW800 will power Gulfstream’s G500, which is scheduled to enter service in 2017, and G600, which is to enter service a year later. The G500 has been undergoing flight testing, and “the engines are doing everything they need to do for that aircraft”, says P&WC vice-president of marketing Michael Perodeau.

Other local OEMs are also on upswings, including Bell Helicopter. In May the company reversed course on the Lafayette final assembly decision, announcing that the 505 would be put together in Mirabel.

A Bell media release said the move would help “optimise manufacturing”, adding that “Mirabel is a vital part of Bell Helicopter's long-term growth strategy and this move confirms our commitment to our Mirabel workforce and infrastructure.” The company expects the new work will enable it to create about 100 new jobs, some of which will be filled by employees cut in earlier years.

The change adds to Bell’s Montreal order backlog about 120 505s, according to Fleets Analyzer.

Meanwhile, landing gear maker Héroux-Devtek is prepping for the formal launch of a massive new contract to supply Boeing with 777 and 777X main and nose landing gears for up to 11 years.

The company plans to deliver a first set of “qualification” gears to Boeing in July, and expects its gears to break into Boeing’s production line in January 2017, says chief financial officer Stéphane Arsenault.

Boeing has outstanding orders for about 500 777 variants, according to Fleets Analyzer.

Héroux-Devtek won the contract in 2013, when it had annual sales of C$257 million. It beat current supplier UTC Aerospace Systems, a division of UTC, which had $63 billion of sales that year. Héroux-Devtek has since embarked on a C$105 million upgrade to its facilities, and expects annual sales to reach C$500 million by 2019, says Arsenault.

“They pulled off a pretty impressive coup,” says Aboulafia. “That is a sold company.”