ANALYSIS: How Saab broke the mould with evolved Gripen E

Saab is targeting the on-schedule delivery of its new Gripen E fighter to the Swedish and Brazilian air forces late this decade, as it steps up export campaigns involving both the advanced model and its earlier C/D-model jet.

The first of three Swedish test aircraft to be involved in the project was unveiled at the manufacturer’s Linköping facility on 18 May, in front of an international audience of current and prospective Gripen users. 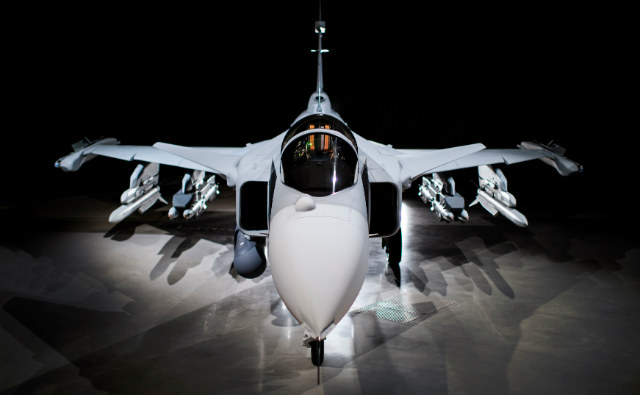 Lead aircraft 39-8 will be handed over to Saab’s flight test department “this summer”, and should make its flight debut at the end of the year, the company says. It will be used initially to verify the general systems, airframe and aerodynamics of the evolved design, which – while visually resembling earlier iterations – is entirely new.

Powered by a GE Aviation F414 turbofan engine capable of generating 22,000lb (98kN) of thrust, the Gripen E has an empty weight of 8,000kg (17,600lb) and a maximum take-off weight of 16.5t. The latter represents a 2.5t increase over the C/D. At 15.2m (49.8ft), it is also 30cm longer than its predecessor, while its wingspan has increased by 20cm, to 8.6m. With 40% more internal fuel, the new model has increased range, payload and endurance, and features an active electronically scanned array (AESA) radar, other updated avionics and new electronic warfare equipment.

Saab chief executive Håkan Buskhe reveals the cost of developing the Gripen E and producing its three Swedish test aircraft will be less than $2 billion.

Sweden has ordered 60 Gripen Es for delivery from 2019 while Brazil will field an initial batch of 28 single-seat NG examples and eight twin-seat Fs, including units to be completed at a new facility at Embraer's Gavião Peixoto site. The export customer’s order includes a single-seat test asset, currently in production. This will be flight-tested in Sweden for around a year before being flown to Latin America.

“I think it will be a great aircraft – definitely the best fighter that we’ve ever had,” Swedish air force chief Maj Gen Mats Helgesson said on the eve of the roll-out. Using the new model will ensure the service is able to keep pace with emerging regional threats, including the Russian military’s Sukhoi Su-35 and T-50 fighters and advanced S400 surface-to-air missile system, he adds.

“We see it is necessary for us to invest in new innovation of [the] JAS Gripen – if we should be competitive and have the right capability as an air force in the future, we need to have a higher level of capacity in the aircraft,” says defence minister Peter Hultqvist. “There is always debate around the size and the numbers, but for now we have a decision around 60 [Gripen Es],” he adds. “If we are going to have more, then we need to take new decisions.”

Speaking during the roll-out, Brazilian air force commander Gen Brig Nivaldo Luiz Rossato described the development of the advanced combat aircraft as “a significant milestone in the history of both countries.” He adds: “The Gripen NG will represent a major advance to face any threat to airspace sovereignty. These fighters will be the backbone of the Brazilian air force.” 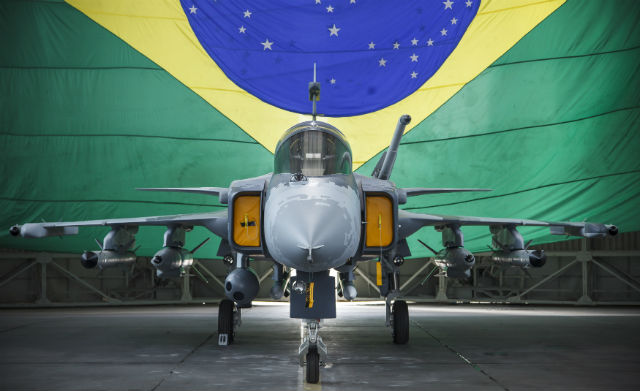 Saab’s adoption of a model-based systems engineering approach has resulted in the accuracy of its design and assembly process improving dramatically over the C/D version, according to head of operations Lars Ydreskog. While this digital technology had been used by the company on a smaller scale before, as part of its involvement in the Neuron unmanned combat air vehicle technology demonstrator and some commercial aviation activities, its use on the new programme was a leap of faith. “We had the courage to go all-in,” he adds. 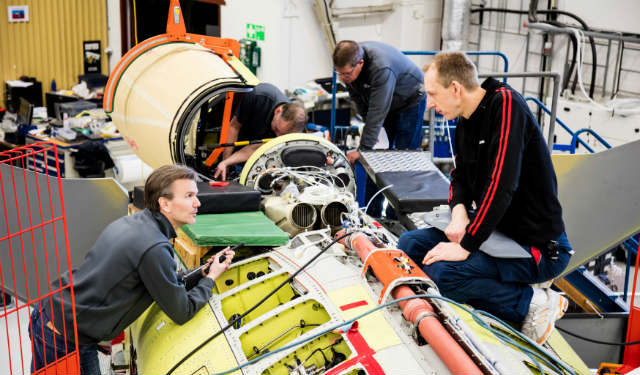 Stressing that aircraft 39-8 is not a prototype, Ydreskog says: “Assembly of the first test aircraft – with 60,000, mostly new parts – was shorter than number 204 for the C/D.” The programme’s other test units are in different stages of structural assembly and only minor adjustments are expected as the shift to series production occurs. “There is some optimisation to do – we can reduce some weight,” he notes.

But Saab believes one of the biggest advances with the Gripen E comes through its use of an all-new integrated modular avionics system, which splits flight-critical and tactical management software. It says the latter’s software, hardware and algorithms can be rapidly changed – like apps on a smartphone – to keep pace with evolved operational requirements or technological advances in computing over the life of the type’s use.

Flight-test activities are expected to be one-third of the total required for the C/D and software and hardware already being flown in the simulator is described by test pilot Marcus Wandt as being “very stable”. A new rooftop laboratory in Linköping will soon start testing the combination of the aircraft’s AESA radar, infrared search-and-track sensor and other equipment.

With the high level of laboratory and simulation-based testing being conducted before the Gripen E gets airborne, Ydreskog notes that during flight testing the company will be “verifying the models, not the functionality” of the new fighter.

Saab believes a potential market exists to produce between 400 and 450 Gripen Es over the life of the programme. Head of Gripen Jerker Ahlqvist says it will have the capacity to complete between 25 and 30 aircraft per year in Linköping, plus output by Embraer, which means it can meet potential export demand.

But it is already eyeing the potential to set up a similar arrangement to that made with Brazilian industry in India, should it succeed in selling the type to the nation’s air force. The latter is being studied as part of a broader government-to-government initiative to increase aerospace collaboration under the terms of New Delhi’s Make in India industrial policy, but does not yet include discussions with potential partners for local assembly. Saab believes at least 100 light fighters are needed for the Indian air force.

Other prospects include Belgium, Bulgaria, Colombia, Croatia, Finland, Indonesia and Malaysia, and the company is anticipating the revival of a process to supply eight C/Ds to Slovakia, following a recent change of government. However, African media reports which suggest a deal has been struck with Botswana are dismissed as being premature, with discussions “at a very early stage”.

Some nations are considered potential C/D buyers while others could contribute to achieving Saab’s sales projection for the E. New-build aircraft in the former standard could be delivered within 18 months of a deal being signed, and Ydreskog expects to be able to match or better this with the new-generation aircraft.

No decision has been made on how long the company will offer the earlier model, but Ahlqvist notes: “there are still customers that only require the capability of the C/D. For many smaller countries now replacing ageing Russian fleets, the Gripen C/D is a perfect match.”

Sweden’s air force has yet to decide what will happen to the bulk of its fleet of around 100 Gripen C/Ds once the new standard enters use. Initial operational capability is planned during 2021 in the MS21 software standard, with full capability to be declared two years later, as an MS22 package becomes available.

But asked whether refurbished aircraft could be offered to international operators, Ahlqvist says “there are a lot of customers out there that don’t want used aircraft.”

Saab notes, more than three years since the formal launch of the Gripen E project for Sweden, it has hit all required milestones.

“More and more countries are evaluating the Gripen system to secure their people and their borders,” says Buskhe. “This is the newest fighter in the world, and we are extremely proud of it.” Ulf Nilsson, the company’s head of aeronautics, goes one step further, noting: “This is the only fighter programme on time and on budget.”