ANALYSIS: How UK military flying training is learning from past mistakes

Fifteen years ago, the UK National Audit Office (NAO) published a report on the Ministry of Defence’s ageing military flying training infrastructure that was so damning it acted as a wake-up call for the services, and prompted a wholesale modernisation.

In essence, the process of training new pilots and other aircrew for the air force, army and navy was too slow and too expensive, and was failing to deliver sufficient personnel capable of performing frontline tasks. In the fast jet sector, pilots were arriving at their operational conversion units still requiring costly additional instruction on expensive platforms.

Partly as a result of the publication of Training new pilots, the MoD went on to launch the UK Military Flying Training System (MFTS) concept. For this, it would employ a so-called training system partner to create and run a new framework capable of meeting its annual throughput requirements and – crucially – its output standards.

In 2008, the MoD signed a 25-year contract with Ascent Flight Training – a joint venture between Lockheed Martin and Babcock International – kicking off a transformation that will continue through the rest of this decade.

A commitment for new advanced jet trainers had been made in late 2006, when the MoD contracted BAE Systems to manufacture a fleet of 28 Hawk T2s. Deliveries of the new model – which brings a major advance in capability over the 1970s-vintage T1 that shares its name – commenced early this decade, to the Royal Air Force’s Valley training base on the Isle of Anglesey in north Wales.

Today, the circuit at Valley is busy with T2s assigned to 4 Sqn, while a last unit of Hawk T1s is also currently scheduled to remain active with the service’s 208 Sqn until December 2017. The latter typically has 12 aircraft on the ramp, with nine or 10 of these being flown per day. Annual capacity is for 15 ab initio students and the provision of 30 refresher courses per year, with around 17 instructors delivering these, says its officer commanding, Wg Cdr Chris Kidd. 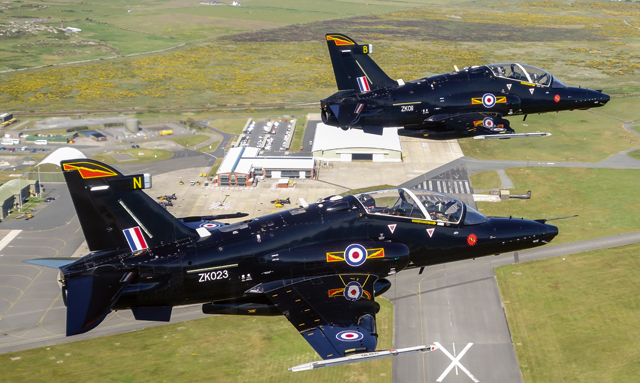 Between them, the Hawks new and old deliver the advanced jet training syllabus for RAF and Royal Navy pilots, along with some additional capacity for international students including recent graduates from Kuwait and Saudi Arabia.

Some two years after the UK’s first ab initio students completed their training on the Hawk T2, Flight International was invited to assess the health of the growing MFTS infrastructure – and given the opportunity to fly with 4 Sqn.

Notably, the visit occurred just two weeks after the NAO had released a new report, entitled Military flying training. This report raised concerns about the introduction of the new model, with criticism leveled at some aspects of Ascent’s performance between contract award and 2012. Some courseware developed by the company was deemed “not fit for purpose”, while there also were “concerns about cost and schedule control, the quality of core [training] provision, and governance and leadership within the Ascent team”, the document says.

Paul Livingston – who took the role of managing director at Ascent in January 2014, after Lockheed colleague Jim Keeler had steadied the ship – openly acknowledges the company’s initial shortcomings, saying it should have better anticipated the challenges of establishing such a capability for the first time. But things have picked up markedly, he adds.

This opinion is backed up the NAO’s recent findings. “Since early 2012, Ascent has improved its performance [and the MoD] has noted an improvement in the quality of its work and a more constructive working relationship with the project team and the Royal Air Force,” it says.

Several key elements of the eventual MFTS model have yet to be introduced, with a contract still pending to replace the remainder of the fixed-wing training inventory with a trio of new types (See P32). These will join the Hawk T2s and four Ascent-provided – but MoD-owned – Beechcraft King Air 350ER Avengers, which are currently used to provide observer training for the RN’s Fleet Air Arm from RNAS Culdrose in Cornwall under the programme’s rear crew training stage one element. A contract to adapt the latter type to deliver a stage two rear crew training capability is expected during 2016.

A previous schedule to field a new generation of training helicopters was delayed earlier this decade, with the RAF, RN and British Army temporarily making further use of the Defence Helicopter Flying School (DHFS) service. A replacement capability for its Cobham-provided fleets of Airbus Helicopters AS350 Squirrel HT1s and Bell Helicopter 412EP HT1s will achieve initial course capability from 1 April 2018, with two bids still being assessed by Ascent.

The NAO is, however, concerned about the need to introduce potentially five new aircraft types to service within just over three years, noting: “The department may not have enough time and staff to certify all of the new core training aircraft in time for the planned start of training.”

“It’s doable – we have solid plans and are well-rehearsed,” counters Livingston. Richard Murray, integrated project team leader for MFTS at the MoD’s Defence Equipment and Support (DE&S) organisation, describes the balance of achieving certification for the new types while simultaneously running down the MoD’s legacy training fleets as a “joint headache”.

When Ascent began delivering training in 2011, the MFTS programme had a forecast lifetime cost of £6.8 billion ($10.6 billion). But major cuts to the MoD’s frontline needs, driven by the Strategic Defence and Security Review of late the previous year, has seen this fall to a current expectation of £3.2 billion by 2033. This largely reflects a shift from a previous expectation to train 480 aircrew per year to just 250: around 150 pilots and 100 rear-crew members.

Murray notes that efficiencies have also been found. For example, as contract signatures for the future fixed-wing and rotary fleets will be made later than previously planned – but with the programme still due to run until only 2033 – savings are possible.

“I’m still confident on all of the core objectives,” says Livingston. “The cost of the programme has fallen, but the quality is going to go up and expand through the other platforms.”

In addition to sourcing the additional new aircraft, Ascent also must provide facilities, courseware, simulators and instructors, he says. “We have a defined output per year and the syllabus is set against that – so we know how many hours a day, how many waves and can anticipate peaks.”

A "peak" was experienced last year, when the rest of the Avenger fleet had to be flown more intensively for several months after one of the King Airs was damaged during a wingtip strike.

After a troubled start, throughput on the Hawk T2 is increasing steadily. The 17th course of students was about to arrive early this month, while a ninth course for instructors is under way. The first students entered the new AJT system in April 2012, and by May 22 ab intio students had completed their training on the type, according to the DE&S.

A total of 24 pilots will train on the new model this year, with this number to increase to 36 following the disbandment of 208 Sqn.

Referring to the previous gap between legacy training aircraft cockpits and advanced types like the Eurofighter Typhoon, officer commanding 4 Sqn, Wg Cdr Paul Mounsey, notes: “For us, the big thing was bridging that gap and making our training more relevant for the future. It’s the advanced avionics that set this aircraft apart.” 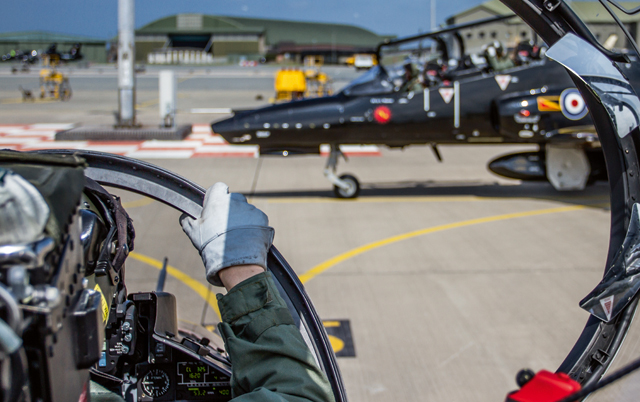 A total of 24 pilots will train on the new model this year, rising to 36 a year when the T1 is retired

One example of this is the T2’s ability to emulate the use of a radar combined with Raytheon AIM-120 AMRAAM medium-range air-to-air missiles. Students perform 15 synthetic radar rides before using the technology in the air, says Ascent instructor Gary Brough. Such an approach “ensures a much higher success rate,” he adds.

“Previously, it was all about getting numbers to the frontline – now it’s written around the student,” says Ascent station manager Meirion Roscoe, himself a former RAF qualified flying instructor (QFI).

“We are arguably world-leading,” Mounsey claims, adding: “we have had a lot of interest from around the world, and a lot of nations are envious of our system.”

Exchange posts have so far been taken by pilots from France, South Africa and the US Marine Corps, with a QFI from Canada to start flying the type in September followed by a Belgian air force pilot during 2016. One Qatar Emiri Air Force pilot is also now flying the aircraft, via the UK’s international defence training mechanism, and Saudi Arabian personnel are also due to commence instruction soon, potentially followed by Kuwaitis. However, Livingston notes that MFTS has been set up purely to meet national requirements, and to be as “taut as possible”.

“At the moment we’re not maximizing all of that availability – but we will be in two to three years,” Murray says of the T2 inventory’s current rate of use.

The UK military provides all QFIs for the Hawk T2, while Ascent employees deliver ground-based training. The nation's dramatically-reduced squadron numbers produced a challenge in maintaining a sufficient number of instructors, and a shortage of such personnel led to a mutually-agreed training pause and resetting of the programme more than two years ago.

“T2 instructors are very hard to find,” says Roscoe. “It hasn’t been a smooth process, but we’re getting better at it.” Future options could include using fewer QFIs, or trying to tempt those who are about to leave the services to extend by a further tour as sponsored reservists, to share their valued experience.

“We have a world-class system here, but we could do more,” says Mounsey. Other activities could include taking night vision goggle training work from the Typhoon operational conversion unit, for example – a platform which costs one-fifteenth as much to operate, but not currently used to provide night-time instruction. Other tasks that could in theory also potentially be “downloaded” in this way could include practicing formation behind a tanker, training in the suppression of enemy air defences and in using advanced precision-strike weapons such as MBDA’s Storm Shadow cruise missile.

Such activities could possibly enable a new pilot to achieve limited combat ready status on the Typhoon after perhaps performing only 10 simulator flights and five live flights on the combat aircraft – significantly reducing both time and cost.

“We need to be slightly bolder and take a little more risk,” says AVM Andrew Turner, air officer commanding the RAF’s 22 Group training organisation, of such a transition. Saying that the system is today “still in replicate mode, rather than innovate,” he adds: “it was a wrong time to be bold a couple of years ago – but now we understand the risk and the partner better.”

Using the breadth of its new MFTS equipment, Turner believes the UK will be able to “deliver top-end, total role conversion – so nothing’s new; just the airframe.”

To showcase its current abilities more widely, a pair of 4 Sqn’s aircraft will conduct a new role demonstration for the first time at the Royal International Air Tattoo at RAF Fairford in Gloucestershire from 17-19 July.

“We have a common goal – to train world-class fighter pilots,” says Roscoe. “This whole system cannot run with any sort of efficiency if we don’t partner.”

Reflecting this, Ascent’s branding is now far less prominent on courseware, for example, than earlier in the programme. “Partnering gets better when you all feel linked to the squadron and the squadron identity,” Livingston notes.

“We are now mature operators of the T2, and have an advanced syllabus,” says Mounsey, reflecting on the completion of his own training at Valley 18 years ago. “The guys leaving here are hands-down better prepared for the frontline than I was.”