The Lockheed Martin F-35 Lightning II is an incredibly complex jet fighter. Each jet is assembled by hand from about 300,000 parts by more than 1,000 workers at the company's mile-long Fort Worth, Texas manufacturing facility.

Each jet takes about two years to emerge from Lockheed’s sprawling, global supply chain. At the end of 2014, Lockheed delivered three jets per month. To support a planned production ramp-up that calls for exponential production growth before 2019, the company must boost its monthly production rate to as many as 17 jets at the Fort Worth facility, plus two more from a new factory in Italy and one more from Japan.

For a programme that has had its fair share of make-or-break moments over the last 13 years – and the expenditure of more than $400 billion – the next five years will be a critical measure of success. Lockheed has declared that at some point before 2019 the cost per jet will be on par with legacy aircraft – or $90 million at most for a conventional take-off and landing F-35A.

Lockheed's entire operation is gearing up for full-rate production in 2019, before which the number of jets is set to expand from 62 in LRIP 9 to 98 and 168 in lots 10 and 11, respectively. Production levels should continuing rising to a full-rate production of 240 jets per year.

Lockheed has to do better than three jets a month to support such a dramatic production ramp-up. With targeted investment and a sizable expansion of its workforce, the airframer has the capacity to produce as many as 17 jets a month at Fort Worth, says Don Kinard, a senior fellow at Lockheed. To get there the company faces a chicken-and-egg conundrum that has not two, but three variables.

Lockheed must invest significant capital in its Fort Worth production line to achieve the desired rate. Company officials are not eager to do that until orders from its US and international customers are solidified. Those customers, however, would prefer to buy jets in quantity at a lower price point.

Lockheed is already preparing for what officials call "rate". The firm expects to increase the production rate by about 50% each year until it is churning out 20 F-35s a month in 2019, including those from Japan and Italy, Kinard says.

The Fort Worth plant operates with about 1,000 employees, but this will increase to 2,800 by 2019 to support the expected ramp-up in production, Kinard says. The staff will will work in two shifts, five days a week, at rate 17.

“The other step is making sure we have the right tools to support that ramp,” Kinard says. 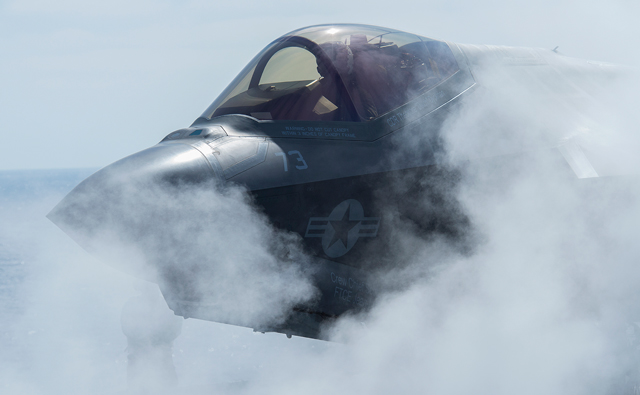 The US military was expected to seek 55 of the type in its fiscal year 2016 budget request, but reports suggest it may up the annual buy to 57

The production line now has eight electronic mating and alignment system (EMAS) stations, where the forward, centre and aft fuselage sections of the three jet variants are joined in a virtual environment before physical mating. The system allows for the precise measurement of joined surfaces necessary to create the smooth outer surface of the very-low-observable stealth aircraft. A single soft-mate station supports assembly of components that do not require the precision of EMAS.

To support a rate of 17 jets per month, the facility will need at least 15 EMAS and five soft mate stations, Kinard says. Whereas the Fort Worth production line currently has 10 final assembly stations – where control surfaces and systems are joined to the fuselage – it will need at least 25 at full rate, he adds.

Lockheed has produced around 120 aircraft for the USA and various international partners since deliveries began in 2011. LRIP 8 will bring the number of aircraft on contract to 216. For comparison, the US Air Force has a total 187 Lockheed F-22 Raptors.

“A lot of people don’t realise how mature this programme is,” says Mike Rein, Lockheed's chief F-35 spokesman. “We’re two-thirds of the way to full-rate production."

The next 12 months are packed with programme milestones. Both Lockheed and the US government’s Joint Program Office (JPO) are eyeing one date with tunnel vision: the US Marine Corps’ 1 July initial operational capability (IOC) milestone. The air force should follow in 2016, and the navy plans to bring up the tail in 2018.

“Over the next couple of years, what we’re trying to do is get all three services to IOC, because if you get all three services to IOC, then a lot of other things are automatically done,” Rein says. “You’ve completed your test programme. You have produced the airplanes you need to produce. The international folks are getting their airplanes because our IOCs lead to their IOCs.”

The Marines plan to have 10 combat-ready jets to support its first operational squadron, but testing delays resulting from an engine fire that grounded the fleet for weeks has already compromised the 1 July deadline. While the JPO has still not approved a permanent fix for the rotor rubbing that caused the malfunction, Lt Gen Christopher Bogdan, F-35 programme executive officer, says the Marine Corps will enter IOC within days or weeks of the July target date; “not months”.

Now that Lockheed has established a steady three-per-month rate, it is hunting for efficiencies throughout the production line to “establish a better flow” of jets to customers, Kinard says. Over the next 5 years, 53% of the aircraft rolling off the Fort Worth production line will be for the USA. The remaining 47% will all go to international customers.

In March 2014, a US Government Accountability Office (GAO) annual report on the F-35 programme applauded Lockheed for achieving manufacturing efficiency and management of its supply chain.

“As the number of aircraft in production has increased, learning has taken place and manufacturing efficiency has improved,” the GAO says. Lockheed “has seen reductions in overall labour hours needed to manufacture the aircraft”.

Annual aircraft deliveries have steadily risen since the first low rate initial production lot jets were handed over to the US government in 2011. Lockheed delivered 35 aircraft in 2013 – an increase of five from the previous calendar year, and 26 more jets than it delivered in 2011. Deliveries stagnated in 2014, over which time annual deliveries rose by just one aircraft.

The US military was expected to order 55 jets in its fiscal year 2016 budget request, but reports suggest it may up the buy to 57, which puts the impetus on Lockheed to nearly double production from the previous two years. 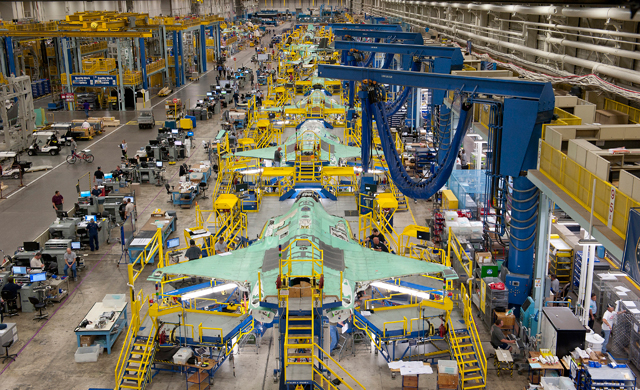 As Lockheed builds more F-35s at a higher rate, the company is expected to continue on a learning curve that has allowed it to reduce per-jet labour by several thousands of hours a year since 2011. In 2014 the airframer specifically aimed to reduce labour hours for the F-35A by 20,000 hours, and for the F-35B by 14,000 hours, according to the GAO. It has achieved a similar reduction for both variants each year since deliveries began in 2011.

“Hour per unit improvements were accomplished from component build areas in Marietta, Georgia and Fort Worth, Texas, affordability initiatives to improve the manufacturing processes and continued quality improvements to the build processes, including delivery to the customer,” Lockheed says.

Kinard says Lockheed has already lowered F-35 touch-labour costs by two-thirds since initial deliveries. It continues to introduce cost- and time-saving production measures such as 3D printing of certain components and laser-guided manufacturing. Lockheed has hundreds of such projects in the works that it says will yield savings in future production lots – if it can scrape together investment capital in the near term.

“The ideas aren’t the problem,” Kinard says. “The problem is finding the funding to make those improvements.”

Michael Cabiness, director of F-35 delivery operations, was brought in specifically to manage the completion and testing of aircraft once production ramps up to Lockheed’s desired levels.

“My main goal is to get this whole organisation ready for rate,” he tells Flightglobal. “Our aircraft generation squadrons need to have a different mindset. They need to be thinking ‘fly, find the problems, fix them and fly again’.”

Cabiness is also looking for efficiencies at the tail-end of production, where final assembly, painting and flight testing mark the steps before delivery. Creating the diverterless supersonic inlet (DSI) bump inside the engine intake, for example, requires 5h of continuous painting to build up the paint, like layers of a pearl. Cabiness plans to dramatically reduce the time required to create the DSI by using injection moulding instead of solid paint. Where there are currently six paint bays with two autonomous sprayer robots, the company plans to add two more.

The manufacturing process was for years bogged down with out-of-station work – also called travelled work – meaning jets would progress through the production line without completing work at the previous station. In reaching a three-per-month delivery rate, Lockheed has dramatically reduced per-jet travelling work from an average of 93h in 2012 to just 8h for aircraft delivered in 2013, the GAO says.

“While these gains in efficiency have moved the programme closer to meeting its established labour hour goals, there is still a long way to go,” the GAO report states. “In 2013, the prime contractor was unable to reach labour hour goals for both the CTOL and STOVL variants.”

Lockheed is also steadily closing the gap between actual and contracted delivery dates. The GAO says aircraft were an average of 11 months late in 2012, while in 2013 deliveries averaged only five months late.

“While deliveries in 2013 were later than planned, the trend continued to move in the right direction,” the GAO adds. “The improvements in throughput in 2013 were achieved despite setbacks that kept the contractor from delivering aircraft for several months during the year.”

Lockheed was able to meet its 2014 programme production goal of 36 aircraft despite an engine malfunction that grounded the fleet for the better part of a month. By the last delivery of the year, the government, Lockheed Martin and its industry team had delivered 109 operational aircraft to the USA and partner nations since the programme's inception.

"Meeting US and international aircraft delivery goals is a stepping stone," says Bogdan. "It's a global undertaking to build and deliver F-35s.Thousands of men and women produced the 300,000 individual parts from 45 US states and 10 other countries to make these stealth fighters, and they should be proud of their accomplishment."

Managing such a complex supply chain is also key to reaching a delivery schedule that will supply the USA and its partners with 240 jets a year. Lockheed oversees about 1,500 domestic and 80 international suppliers spread across 11 countries, the GAO says.

Alcoa Defense is a major supplier of materials and components – especially the titanium and aluminium bulkheads that make up the F-35’s horizontal structure. The titanium bulkheads for all three variants of the F-35 are made in Cleveland, Ohio, on Alcoa’s 50,000lb (23t) forge. The forge was overhauled and upgraded in 2009-2011 to improve bulkhead strength and increase production capacity, says company president Eric Roegner.

“We made that $100 million investment anticipating the upcoming build rates of the F-35,” Roegner says. “It hurt us a little bit over the last few years that it has sort of held flat, while the original plan was that the build ramp would have started by now. But that investment is there and ready to go.”

Like Alcoa, other key materials and component suppliers for the F-35 have invested in production capacity in anticipation of a ramp-up in F-35 deliveries, Roegner says. Some major aerospace materials suppliers have made investments to ensure materials like titanium are in sufficient supply from reputable sources.

Companies like Airbus and Boeing, which use much more titanium to build commercial aircraft than for defence purposes, have invested and planned to make sure there is sufficient non-Russian supply available “in the event of a larger geopolitical hiccup”, he says. “The industry is not worried about the availability of titanium.”

“We have been chomping at the bit, so to speak, for these build rates to come because we want to get a return on our investment,” Roegner says. “Many in the supply chain, having already made capacity investments, are actually quite eager for this uptick. As opposed to being concerned about the coming uptick, we are eagerly awaiting it.”