Singapore Airlines’ decision to become the first operator to use Airbus A380 aircraft on Indian routes is likely to be followed by several other A380 operators serving this giant market.

From 30 May, SIA will fly twice daily on the Singapore-New Delhi and Singapore-Mumbai routes, down from three now, all operated with Boeing 777 aircraft. After the change, SIA will operate one A380 service to each city daily, and one 777 service.

According to FlightMaps Analytics, several of the world’s biggest A380 operators deploy significant widebody capacity into these cities using 777s, 747s, and A330s. If they follow SIA’s lead, they could boost capacity to key Indian cities by upguaging to the A380, thus providing valuable feeder traffic to hubs in the Middle East, Southeast Asia, and Europe.

Lufthansa has long indicated that it would like to replace its 747s with A380s on its services to India. In March it operated 93 services to A380-approved cities, with a daily frequency to three destinations: Mumbai, Bengaluru, and New Delhi.

British Airways could also see a compelling case for operating the A380 to India. In March, it operated 50,000 seats to Indian destinations from Heathrow. A full 147 of the 155 frequencies it operated to three A380-approved destinations (New Delhi, Mumbai, Bengaluru) were operated with 747-400s, with the remaining eight operated by 777s.

Widebody flights by A380 operators to A380-approved cities 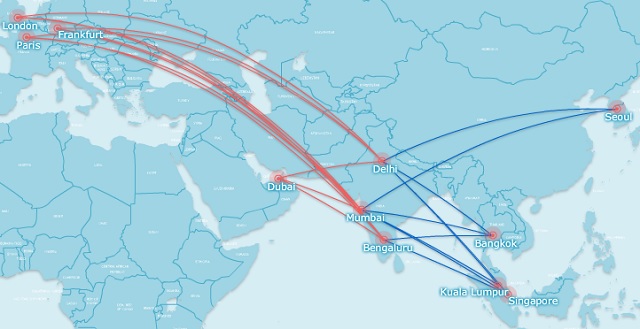 In late February Willie Walsh, the chief executive of British Airways parent IAG, said the company was experiencing “significant reduction of seat costs” with the A380 compared with its 747s, while also enjoying superior slot flexibility.

India is a promising destination for A380s serving overseas hubs, especially given that New Delhi has effectively outsourced the country’s international hubs to big airports in the Persian Gulf and Southeast Asia.