Europe’s airlines and airports are broadly in agreement that the European Commission’s newly published new aviation strategy is a welcome development for the industry.

The Commission yesterday published its much-awaited aviation strategy, which it says for the first time sets out a roadmap towards a more competitive EU aviation sector. This covers a range of initiatives, some already in process, including moves to negotiate more EU-wide aviation deals with non-EU countries, fresh guidance on foreign ownership rules and efforts to tackle Europe's airport and air traffic capacity issues.

The Commission says the strategy aims to boost Europe's economy, strengthen its industrial base and reinforce its global leadership position. 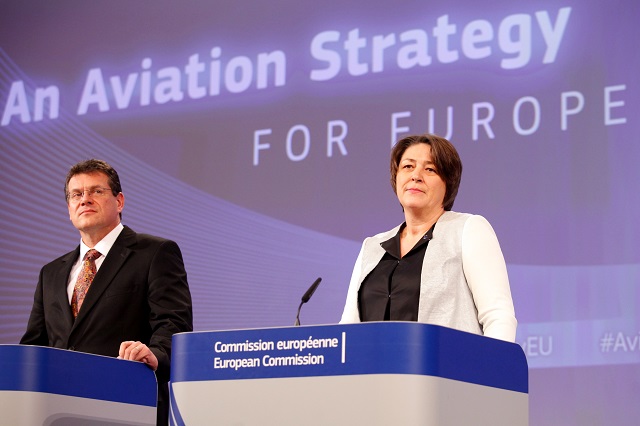 Simon McNamara director general at European Regions Airline Association (ERA) believes the new strategy “says a lot of really good, positive stuff about aviation that we haven’t heard before, about its value in terms of job creation that’s really positive and it has identified some key areas where there is regulatory complexity”.

He says he is “particularly happy” that for the first time the commission has spelt out the value of further liberalising the industry, not just in terms of the new open skies agreements with countries such as China and the UAE it plans to negotiate, but the prospect of “real investment in the business” through the loosening of current limits on airline ownership.

McNamara also says that “now we need a really solid, concrete action plan to go with the rhetoric” adding that the strategy document published is “just the first step” in a process as the Commission will now need to hammer out a workable plan with the European Parliament and member states. It will present

Athar Husain Khan chief executive of the Association of European Airlines (AEA) also welcomes the strategy saying it is the “comprehensive strategy we have been looking for for quite a long time” which recognises the need for action on Single European Skies, passenger rights and the need for a level playing field in Europe.

However where it “falls some way short” is in “concrete” measures" and will face challenges at a political level, he says.

Khan believes the Commission will be able to grab some the “low hanging fruit” such as securing an open skies agreement with countries such as Armenia, but gaining the backing of European member states for such deals with Turkey and the Gulf states will be “more tough” to achieve.

He says the “key” to liberalising ownership rules with third party countries will only come through “reciprocity”, pointing out that even today the USA only allows foreign investors to own up to 25% of an airline despite the open skies agreement with Europe.

He says the next phase will for the Commission to begin discussions with the European Parliament to work out any contentious issues before seeking to put the strategy into action but says the current dispute between the UK and Spain which wants to exclude Gibraltar airport from EU aviation law could slow the process.

Olivier Jankovec, director general of airport association ACI Europe describes the strategy as a “fairly positive” development adding “in terms of strategy direction it goes in the right direction”.

He says the strategy has a good “focus” on connectivity and recognises the strong link between aviation and economic development. "If you read the document it is clear signal that the commission is seeking to normalise this industry.”

But one area where Jankovec says he is “a little disappointed” is in the decision to address airport capacity issues through air traffic reforms and a review of the airport slot directive.

“It is key for us that the airport capacity crunch is addressed more forcefully and we see at the national level it hasn’t worked,” he says, giving the example of the continued debate over new runways in the UK.

“One thing we proposed to the Commission was that it set airport capacity levels at EU member state level that is aligned to the Single European Sky” he says. “It is not going to solve the airport capacity crunch by changing the slot rules,” he adds.

Europe’s five largest airline groups, Air France-KLM, EasyJet, IAG, Lufthansa and Ryanair, which are busy setting up their own airline association, welcomed the Commission’s aviation strategy. But they say “we need to act now” on areas such as “large scale airport monopolies, high charges, taxation and inefficiencies characterise the aviation supply chain”.

They add: “The focus must be on concrete and measurable actions that support European airlines and their customers by providing more flights and lower fares. Airport charges have risen by more than two thirds over the last ten years. This is in direct contrast to the lower air fares being delivered by Europe’s airlines.”

The Commission has also committed to review current labour laws and the relevant national court jurisdictions, with special emphasis on the “mobile” aviation worker. But this does not go far enough for the European Transport Workers’ Federation. It says it is “dissatisfied by the lack of binding legislative proposals and actions in the social field”.

Enrique Carmona, the ETF’s civil aviation section president, says: "The adoption of a comprehensive strategy on aviation by the European Commission is needed. The presented document however does not strike the right balance between efficiency, safety, security and social concerns, which are all crucial for the industry’s future.

"The existing standards should not be watered down in view of external competition. On the contrary, they should ensure fair competition for airlines, social protection for workers and most importantly, safety for the flying public."

A year after transport commissioner Violeta Bulc signaled her intention to formulate a new aviation strategy for Europe, publication of the strategy marks a key milestone. Bulc will now present the strategy to the European Parliament and the EU's Council of ministers and highlight an Aviation Summit organised under the Dutch presidency for 20 and 21 January as "a good opportunity to gather the first reactions of the stakeholders"

The Commission says the on basis of these discussion it will assess how to proceed with implementation of the strategy. "Some actions – such as the evaluations of existing legislation – can move ahead without delay. Others will take the form of Commission proposals and therefore be subject to normal consultation and decision-making procedures," it says.