In 2016, the Italian air force will mark the 70th anniversary of flight training activities at its Lecce-Galatina air base, also an early milestone in the transition to its newest instructional model.

The first ab initio students chosen to fly Alenia Aermacchi’s twin-engined M-346 – named the T-346A by the service – in late August 2015 began the classroom phase of their training programme. Accompanied on their course by an instructor pilot from the same service and another from the Royal Netherlands Air Force, they are to complete a Phase IV/lead-in fighter-training course that has, until recently, been delivered exclusively using the Italian manufacturer’s older MB-339CD.

Five T-346As are today assigned to the 61st Wing at Lecce-Galatina in south-eastern Italy. The aircraft are being used by the 212 Squadron training unit, and also by the instructors who make up 214 Squadron.

Almost 1,000 flight hours had been accumulated when Flight International visited in early September, one year after the air force’s first two examples had arrived. The bulk of this total was logged during the accelerated development of a training syllabus that contains around 60% new content when compared with the type that it will be replacing.

The T-346A is the latest jet trainer to be introduced by the Italian air force, following the MB-339, which arrived at Lecce-Galatina in 1981, and the earlier MB-326.

Italy’s first student pilots for the new-generation type commenced their training several months ahead of schedule, against an original target to start the activity in January 2016.

“I thought there was room to push,” says base commander and 61st Wing commander Col Paolo Tarantino, who is also in the process of converting to the type.

The first course is scheduled to run for 10 months, concluding next May; current plans call for this to overlap with a second intake of students, due to arrive in March 2016. The latter could make use of an enhanced syllabus, which would draw on the early lessons being learned by the current small cadre of instructors.

For those pilots selected to operate the Italian air force’s Alenia Aermacchi/Embraer AMX, Eurofighter or Panavia Tornado combat aircraft, or its future Lockheed Martin F-35, the T-346A has a variety of features expected on a fourth- or fifth-generation fighter. These include the use of voice commands to change the information shown on cockpit displays or communication channels, a live link to other models of the new aircraft, and the use of embedded simulation to replicate the use of advanced sensors and weapons.

Its handling performance is also a step up from the MB-339, with the ability to achieve Mach 1.2 at 45,000ft and manoeuvre between +8g and -3g. By year-end, pilots should also be able to call on a maximum angle of attack performance of 30˚, up from a current limit of 25˚.

“The aim of the syllabus is to introduce our guys to fifth-generation performance, including sensors and handling,” says one of the unit’s instructor pilots, a lieutenant colonel who asks to be identified using his call-sign, “Sossi”. “It’s more system management – something more tailored to what they will do on the OCU [operational conversion unit].”

From the first course, this will feature elements including the use of a helmet-mounted display and night-vision goggles, and also an approach to and attempted ‘contact’ with a tanker aircraft.

“If we can download just this part off the OCU, they can train on more advanced scenarios,” Sossi notes. The objective is for that unit to be able to use the same number of total hours, but deliver a new pilot to a frontline unit who has achieved limited combat-ready status.

This will become increasingly important as more pilots progress to fly the single-seat-only F-35. “This is the new concept of training – everything has been radically changed,” he says.

“We teach them mission leadership, and try to put them in complicated scenarios to provide them with better training to become a wing-lead,” Sossi notes. During a sortie, a student will either lead the formation out or back, and also perform tasks like liaising with air traffic controllers, or leading a diversion to another base, such as Grottaglie. 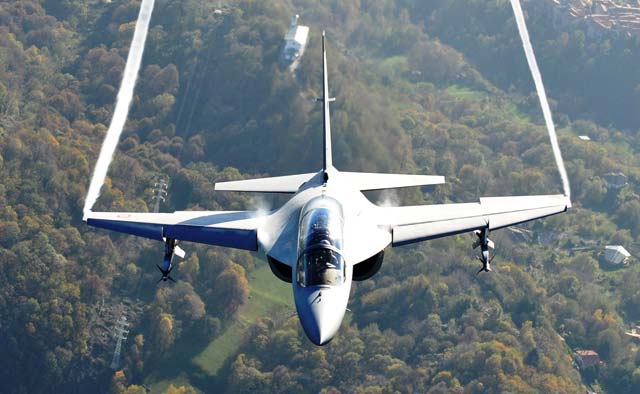 “The possibilities are endless – that was the biggest challenge in the last year, when we took the aircraft from scratch and built a training course around it,” says Sossi. “We still have to finalise the tactics – we want to go slowly with the introduction.”

A transition plan should see a dramatic increase in the delivery of training hours, from the more than 10,000h to be delivered by the 61st Wing this year to over 15,000h as its T-346A fleet grows ahead of the MB-339’s scheduled retirement. Operations with the older model are likely to end at Lecce-Galatina during 2019. Flightglobal’s Fleets Analyzer database records the air force as having 72 of the legacy type in current active use.

The limited number of T-346As being acquired is made possible as Alenia Aermacchi’s in-development M-345 is expected to meet Italy’s future requirements for delivering Phase II (basic) and Phase III (advanced jet trainer) elements, where it will replace the MB-339A. While a production order has yet to be signed, the model – which its manufacturer has branded a “high-efficiency trainer” – is expected to enter Italian air force service in 2018.

A new training model will see pilots ‘streamed’ following their completion of Phase III instruction, with some sent to continue their preparation on transports, helicopters or for remotely piloted air systems. Those selected for the latter discipline will receive training including some use of the M-345 as a ‘companion trainer’ to ensure they have a strong level of airmanship and situational awareness.

Since their introduction, Lecce-Galatina’s T-346As have twice been used to provide a ‘Red Air’ capability for Italian Eurofighter and AMX units. The air force sees this as another valuable contribution that the type will deliver, and the aircraft’s four different control laws can be employed to enhance its value. For example, these can be used to enable the pilot to manoeuvre in a manner capable with types ranging from the Mikoyan MiG-21 and Tornado, to approaching that of the Typhoon.

With good early results reported, the next planned example of such an application should come with the deployment of two aircraft to participate in a Tactical Leadership Programme event at Albacete air base in Spain late this year or early in 2016.

Lecce-Galatina has a long history of also delivering instruction to international students. Currently, its squadrons can count instructor pilots from Argentina, Austria, France, Greece and the Netherlands, while its students include those from Greece, Kuwait, the Netherlands and Singapore.

Underscoring its status as an international training facility, all instruction delivered at Lecce-Galatina is in the English language.

Italy’s strong bilateral relationship with Kuwait will see at least 75 of the latter’s pilots undergo training in Italy – a relationship which will also be of value as Kuwait completes its planned purchase and introduction of 28 Typhoons.

Meanwhile, the first of 16 instructor pilots from the M-346’s most recent customer nation – Poland – should begin making preparations to train on the type from January-February next year, after conducting early work with Alenia Aermacchi in Venegono.

While there is already additional international interest in placing students and instructors on the T-346A, Tarantino notes that Italy’s current plan for 18 aircraft is sized wholly to meet its own requirements, including providing a ‘Red Air’ capability.

As a result, a clear opportunity exists for Alenia Aermacchi to offer access to an industry-supported fleet of the type, to also be operated from Lecce-Galatina.

“Now we need to go to a position where we can increase the number of aircraft flying out of Lecce with aircraft that don’t belong to us,” says Tarantino. “We cannot provide more international training in the way we did with the MB-339.”

At least five nations will be needed to support the establishment of such an industry-backed scheme, with the European Air Chiefs organisation having previously spoken in favour of using the Italian facility.

The successful completion of a first training course within the next several months and continued momentum with fielding the new type could play a significant part in making such a vision become reality.

WHERE INTEGRATED TRAINING COMES TOGETHER

Constructed as part of the Italian air force’s deal with Alenia Aermacchi for the T-346A, the integrated training system facility at Lecce-Galatina air base is expanding its capabilities, ahead of the arrival of additional synthetic devices next year.

The early stage of instruction includes self-paced, classroom-based training. As students progress, a PC-based simulation capability enables them to learn procedures such as the aircraft start-up sequence and emergency drills, and up to eight students and instructors to operate together. This gradual approach supports confidence-building, according to 212 Squadron instructor pilot “Sossi”.

The training school also has additional part-task trainers and two mission planning and debriefing systems. A real-time monitoring station enables students to interact with a forward air controller, or be supervised by an instructor, who also has the ability to add computer-generated forces to increase the complexity of a sortie.

“It’s something that provides a tremendous benefit that we didn’t have before,” says Sossi. “The minimum schedule is for the student to perform the task three times before doing it in the simulator.”

In all, the current T-346A syllabus includes 177 simulator events and 90 live flights, including more complex activities than was possible with the aged MB-339. This includes using a ground station to track aircraft activities in real-time.

The use of live, virtual and constructive technology in particular will deliver a jump in capability. “We can link a simulator to an aircraft and you are thinking like it’s another aircraft in the sky,” he says. This technology also will enable a student to see simulated aircraft on a helmet-mounted display, in an advance that is now being developed by Alenia Aermacchi.

In the air, an enhanced embedded tactical training simulation capability, being provided by Israel’s Elbit Systems, will allow students to gain experience in operating advanced systems including radar, self-protection equipment, beyond visual-range air-to-air missiles and a targeting pod, while using an aircraft with one-tenth the operating cost of a Eurofighter.

One full flight simulator is already operational at Lecce-Galatina, and a second will come online by mid-2016, along with another part-task trainer. This will complete the equipment to be installed in the facility.