Malaysia Airlines chief executive Christoph Mueller has presided over major changes in the last 12 months, but it is far from clear that the airline will not regress to its old, loss-making ways.

Khazanah Nasional, the sovereign wealth fund that owns the carrier, said Mueller is pulling out of his three year contract owing to a “change in personal circumstances.” He will stay until September 2016, with a successor to be named before he departs. Following this, he will remain as a non-executive director.

Rumours, of course, will abound about why Mueller is leaving halfway through his contract. One source within the airline indicates that Khazanah itself may have played a role in Mueller’s decision to leave, with increasing demands for details about plans and the carrier’s performance.

Curiously, Mueller’s track record in his 12 months at the struggling carrier is impressive. Just two weeks ago Mueller wrote a letter to staff stating that the carrier had recorded a “small” monthly profit in February – its first profitable month in years.

He said that the workforce was “largely right sized,” and that network cuts were more or less complete.

Analysis of Flightglobal data makes it clear that the last year has been one of major upheaval – this is quite apart from the culling of 6,000 staff, which brought the carrier’s headcount to 14,000.

FlightMaps Analytics shows that this sharp fall in ASKs was largely due to the elimination of several high-profile, long-haul routes such as Amsterdam, Paris, Frankfurt, Istanbul, and Brisbane. It also shows that the airline added no new routes during the 12 months of Mueller’s reign.

Flightglobal’s Fleets Analyzer database shows that Malaysia Airlines’ fleet has also changed radically. When Mueller sat down for his first day at the carrier in May 2015, the carrier had 95 in service aircraft. In 12 months this has fallen to 79.

Those changes have not been without controversy, however, with a number of lessors wrinkled by sudden returns of 777s without any compensation. The new corporate shell for the carrier has been able to saddle the lease obligations back to the old Malaysian Airline System, which is in the process of being wound up, leaving some lessors in a tight spot. 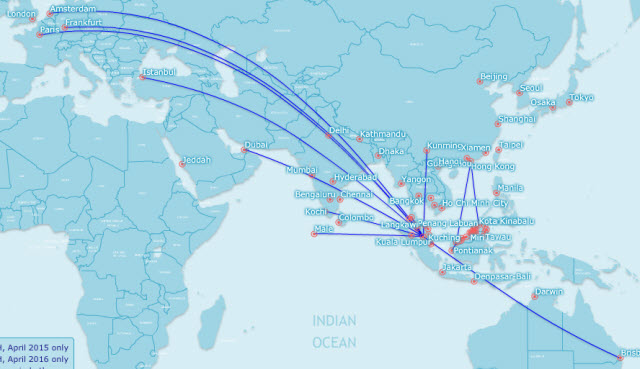 Other major fleet changes appear to be in the works. In October 2015 Mueller told Flightglobal that Malaysia Airlines wanted to get rid of six Airbus A380s in 2017-2018. Given the unproven secondary market for the A380, the fate of these aircraft is far from clear.

All this was presaged in August 2014, long before the arrival of Mueller, when Khazanah issued its 12-point plan to save the carrier from collapse. Plans called for major reduction of debt, a return to profitability in three years, a delisting (which took place in late 2014), and workforce reductions.

Changing Malaysia Airlines, however essential, was never regarded by anyone, and certainly not by Mueller himself, as anything but the toughest job in the aviation. Still, on a pure numbers basis he seems to have done what he set out to do.

The key things to watch in the coming months are Khazanah’s choice to replace Mueller. Will it fall back on a steady, establishment figure who does not want to rock the boat? Or will it again seek a tough foreign chief executive like Mueller, who is willing to make hard decisions – irrespective of who they upset?

What also bears watching is whether some of the key hires during Mueller’s short reign will stay with Malaysia Airlines. The last 12 months has seen it receive a new marketing head, new chief commercial officer, and new chief operating officer.

Malaysia Airlines has had more than its share of shocks in recent years, namely the disappearance of MH370 and the shooting down of MH17. In comparison with such catastrophes the resignation of a chief executive is of negligible import.

Still, Mueller’s departure is an unwelcome surprise for Malaysia Airlines, creating uncertainty at a daunting time.