The year 2014 saw a 10% increase in global passenger-to-freighter (P2F) conversions to 70 aircraft, driven by growth in narrowbody conversions, while extreme weakness continued to dog the widebody conversion market.

Flightglobal’s Ascend Fleets database shows that 62 narrowbody freighters were converted in 2014, up from 50 in 2013. The two most converted types, by a large margin, were the Boeing 737, with 36 conversions, and the 757, with 20 conversions.

Among 737s, 12 -300s and 24 -400s underwent P2F conversions in 2014. The majority of these aircraft will operate with Chinese courier and freight carriers, but several will operate with US and African operators. 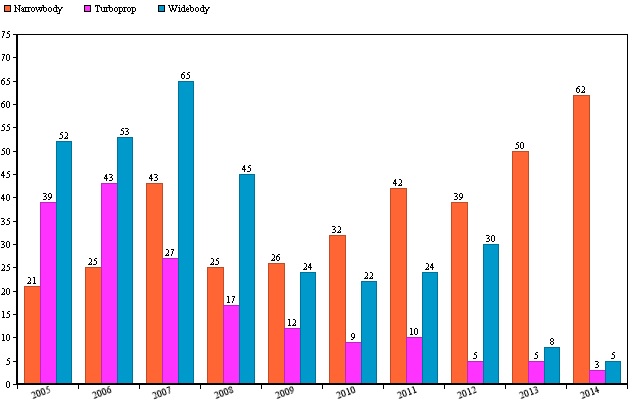 Richard Evans, a senior consultant at Ascend Flightglobal Consultancy, says that replacement demand for legacy types such as the 727 has driven the narrowbody P2F market since 2010. A more recent driver, he adds, is downsizing from larger types. He points out that FedEx has parked Airbus A310s and McDonnell Douglas DC-10s in favour of using 757s.

Persistent overcapacity in the global cargo market, however, meant widebody conversions remained very weak, with just five aircraft converted compared to eight in 2013. Furthermore, all five converted aircraft were mid-sized 767-300ERs, with no 747 conversions taking place the entire year. This is a far cry from 2005-2012, when an average of 39 wide-bodied aircraft underwent P2F conversions annually.

Evans is sceptical about the outlook for future 747-400 P2Fs.

“There are large numbers of 747s parked: both factory built freighters with nose doors, as well as 747-400 P2F variants,” he says. “Given the large amount of long-haul belly hold capacity on backlog, as well as this latent overcapacity from the stored fleet, it appears unlikely there will be further 747-400 conversions. It’s not impossible that some of the Asian airlines that have relatively late-build 747-400 passenger aircraft may convert some (e.g. China Airlines), but it’s difficult to see.”

“I’d also expect some of the more competitive stored widebody freighters to return to service,” he says. “In general, the higher the fuel price, the more likely it is that airlines that fly aircraft at high daily utilisation (> 4,000 hours a year) will buy new build aircraft, to take advantage of their lower fuel burn. The factory fresh freighters also offer higher payloads than converted freighters, and the 747 has the unique capability of nose loading. For airlines that have lower utilisation, falling oil prices make conversions relatively more affordable."