LATAM Airlines Group's joint ventures with Oneworld partners American Airlines and IAG will solidify the alliance's leading position on routes between North and South America, boosting its competitive edge against SkyTeam on flights between Europe and South America.

American is already the top carrier by market share on capacity between North and South America, Innovata data shows. The Fort Worth-based carrier accounts for more than a quarter of capacity between the two regions, followed by LATAM's Brazilian subsidiary TAM with a 11.5% share. TAM's sister carrier LAN holds a 9.3% market share.

With LATAM and American joining forces through a joint venture, the carriers will surge to a combined 46% market share. This puts it way ahead of a combined 23.7% market share held by Star Alliance carriers United Airlines, Copa Airlines and Avianca.

LATAM says the joint venture with American will result in better connectivity with 2,500 daily American flights within the USA and Canada. 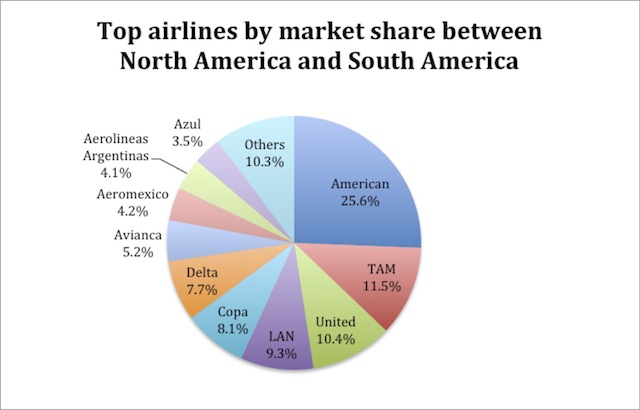 In the Europe-South America market, Oneworld's combineed market share will grow to a third. IAG carrier Iberia is already the top airline with a 14.9% market share, Innovata data shows. TAM and LAN have shares of 8.8% and 5.5% respectively, and while IAG's British Airways holds a 4% share.

IAG executives have long said they were keen to have a joint venture on routes to South America with LATAM, to boost its footprint within Latin America.

With the joint venture between LATAM and IAG, the grouping will almost catch up with SkyTeam's leading share on routes between Europe and South America. SkyTeam carriers Air France and KLM hold a combined 23.6% market share, and this grows to 34.4% when adding the shares held by SkyTeam European partners Air Europa and Alitalia. 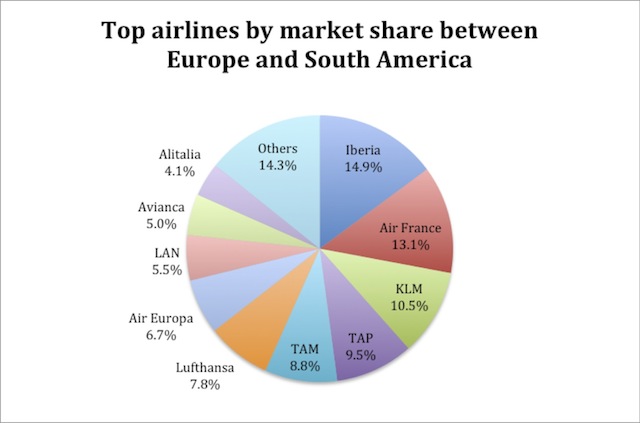 LATAM's chief executive Enrique Cueto says in a statement that the joint ventures with IAG and American are a necessary step "to offer the best network of connections for everyone in Latin America". It also increases the possibility of LATAM adding new routes and direct flights to new destinations.

The recent year has seen LATAM growing to both Europe and the USA. Its Peruvian affiliate LAN Peru will launch nonstop service between Lima and Washington Dulles from 2 May, adding a fifth US destination to LATAM's network after Miami, Orlando, New York JFK and Los Angeles.

In Europe, TAM began service to Barcelona from Sao Paulo in October 2015, adding its second destination in Spain after Madrid. TAM plans to grow this route to daily from June. LATAM now serves a total of six destinations in Europe: Madrid, Barcelona, Frankfurt, London, Paris and Milan.

LATAM's partnerships with American and IAG are in line with the group's strategy of remaining competitive on long-haul routes, without the airline itself opening up new destinations.

In a 2013 interview with Flightglobal, Cueto said: "We are not going to be the main player in long-haul operations... we prefer partnerships, to give passengers the best way to be in any part of the world in the best form."

Cueto had emphasised that the airline was fully aware it alone will never be a major player in long-haul traffic to South America, and plans to focus on being the strongest airline in South America. He pointed out that the best way for a passenger travelling from say, China to Chile, is still through Europe. "We don't have any advantage in this area... so our strength must be the intra-South American traffic."

A PIECE OF THE LATIN AMERICAN PIE

While joint ventures among global airlines are growing, they are still in the infancy stages in Latin America - a fact that LATAM itself pointed out when it announced the deals with American and IAG.

"Over 80% of the main airlines in the world have already implemented at least one of these type of agreements," says the airline group, adding that more than 30% of global long-haul traffic is operated through such joint ventures.

In the 2013 interview, Cueto blamed Latin American governments' wariness of joint ventures and codeshare agreements among airlines: "For them [the governments], any consolidation in the region, any codesharing is in some way considered anti-competitive."

LATAM says it expects regulatory approvals of the joint ventures with American and IAG to take at least 12 to 18 months.

American and IAG are not the only airlines keen on growing within Latin America, despite the economic troubles afflicting the region in the recent year. Delta Air Lines is in the process of acquiring up to a 49% stake in SkyTeam partner Aeromexico and already holds an over 9% share in Brazil's Gol. Delta is also pursuing a joint venture with Aeromexico and has said it intends to chase a similar deal with Gol when US-Brazil open skies are in place.

Star Alliance member United Airlines has taken a 5% share in Brazil's Azul. Despite not being a Star Alliance member, Azul has become a Latin American link for the alliance in much the same way as Gol has for SkyTeam in Brazil. Its founder David Neeleman is part of a consortium that holds a majority stake in Star member TAP Portugal - a move that is set to grow capacity between Brazil and Europe in the coming years.

Copa's chief executive Pedro Heilbron declines to comment, while an Avianca spokeswoman did not immediately respond to questions.