A 15min debut sortie was performed on 10 August 2013 from a location not yet identified by the Ministry of Defence or lead contractor BAE Systems, but shown in released images to have been the Woomera range in South Australia.

An undisclosed number of ­additional flights, each up to a maximum of 1h in duration, were conducted from the same location during an initial test phase, which BAE group managing director Nigel Whitehead earlier this year said had ­“surpassed expectations”.

In early February, the MoD partially lifted the veil on the achievements so far for its ongoing, £185 million ($311 million) Taranis programme. The bulk of information about the demonstrator’s performance – and future objectives – remains classified, however.

Despite this, writing in the Defence Equipment and Support organisation’s Desider publication, Air Marshal Simon Bollom, Chief of Materiel (Air), describes the campaign so far as having demonstrated that the design is “at the forefront of low observable technology”.

As one of the programme’s key partners, Rolls-Royce faced a significant integration challenge in using the Adour 951 turbofan from new-generation examples of the BAE Hawk jet trainer with the demonstrator. ­Capable of generating 6,500lb-thrust (29kN), and with full authority digital engine control software, the same powerplant is used for ­Europe’s Dassault-led Neuron UCAS ­demonstrator, which first took to the air in ­December 2012.

While the Hawk’s airframe dimensions are close to those of both the Neuron and Taranis – the latter has a roughly 10m (33ft) wingspan and a fuselage length of around 12m – this is where any design similarity ends.

“Rolls-Royce was responsible for the ­propulsion and power system – it wasn’t about the engine per se,” says Conrad Banks, the company’s chief engineer, defence ­technology programmes. 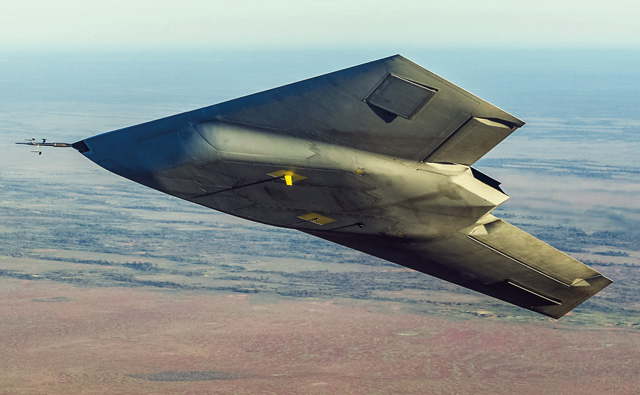 “The engine doesn’t just provide thrust through the air, but also supports the systems throughout the airframe. The flight systems and control systems are power-hungry,” he notes. “This wasn’t a typical aerospace programme about gas turbine development. Our focus was on the complex and embedded installation of the engine into the body of the airframe itself, with particular attention on the low observable exhaust system.”

Integrating the R-R/Turbomeca-developed Adour 951 within the fuselage of the stealth aircraft was a complex task. This is due to the need to ensure the engine cannot be “seen” from head-on – a key element in reducing the platform’s radar cross section. “Getting the design right is a challenge,” says Banks, who adds that such a configuration can potentially create aerodynamic issues, or lead to distorted air entering the engine.

Working closely with BAE was essential, as the prime contractor was responsible for the design of the engine air intake, which forms part of the Taranis’ structure. Low observable techniques and materials used for the UCAS had previously been tested through activities such as the airframer’s ground-based Project Replica, which featured a twin-tailed, piloted combat aircraft design.

R-R also was required to maintain a close ­relationship with GE UK and Qinetiq during the Taranis project. “We worked very well ­together as UK industry,” says Banks.

The current programme goals for Taranis have not yet been revealed, but are known to have expanded since the initiative was launched in 2006. This contributed to a schedule extension from that detailed at the demonstrator’s roll-out at BAE’s Warton site in Lancashire in July 2010, when first flight was described as to occur the following year.

It is not known whether the current planned trials could include work to deploy weapons – an activity which will be performed using the Neuron.

However, BAE describes Taranis as having been designed “to demonstrate the UK’s ability to create an unmanned air system which, under the control of a human operator, is capable of undertaking sustained surveillance, marking targets, gathering intelligence, deterring adversaries and carrying out strikes in hostile territory”.

The Taranis project is among activities which will be used to inform the UK’s investment decisions linked to a proposed future combat air system (FCAS) capability. FCAS is being studied under a bilateral programme agreement with the French defence ministry.

Generic imagery released by BAE of such a platform shows a larger airframe with a markedly different design to the UCAS demonstrators being flown by both nations.

To potentially enter service from around 2030, such a system would be operated in conjunction with manned types like the ­Eurofighter Typhoon and Dassault Rafale. It is unclear whether the increased power requirements for an operational FCAS could be met through further developing the Eurojet EJ200 or Snecma M88 engines used by the ­respective manned types.

In a recent written submission to the UK Defence Committee, the MoD says: “UCAS will not replace any of the Royal Air Force’s front-line aircraft in the short term, but in the longer term a mix of manned fast jets and UCAS could be used on operations.”

Contained within a report titled Remote Control: Remotely Piloted Air Systems – current and future UK use, the MoD’s statement adds: “Given the nature of combat operations, there will always be a role for skilled operators and pilots to ensure that remotely piloted combat missions are conducted appropriately, proportionately and legally.”

For the UK, such a capability would follow the RAF’s current use in Afghanistan of the General Atomics Aeronautical ­Systems Reaper and follow-on Scavenger capability, which the MoD says should deliver “deep and persistent armed intelligence, ­surveillance and reconnaissance” services from 2018.

With regard to the Anglo-French FCAS activity being led by industry partners BAE and Dassault, R-R’s Banks says only joint aspects are being pursued through an ongoing demonstration programme preparation phase, with national-only work on Taranis and Neuron remaining fully firewalled.

Study into a potential FCAS continues, with the UK expected to consider a more ­substantial programme investment as part of its Strategic Defence and Security Review process in 2015.

“It has had its difficulties over the years, but [Taranis] is now generating huge intellectual property, and will start to crystallise our thoughts on developing combat UAS into the next decade and beyond,” says Bollom.

While they wait on that decision, the ­partners involved in Taranis – which was jointly funded by the MoD and industry – believe the experience gained has proven their combined capability to produce such a ­sophisticated system.

“If UCAS goes from these demonstrators to an operational capability in the future, this programme will have been vital. It has ­developed our capabilities significantly,” Banks says.

Key areas of progress made by R-R have been in tooling, at the manufacturing level, and in “mechanical and aerodynamic learning”, he says. The company’s work has also resulted in “a large number of patents”.

“This was the first part of the campaign, and it remains an active one,” says Banks.

Referring to the completed phase, he notes: “It was such a ground-breaking demonstration. We look back on it as having been very successful.”