While profits fell last year at Irish budget carrier Ryanair for the the first time in five years, the airline remains the biggest European low-cost operator in terms of passenger numbers, revenues and net profits.

Despite profits slipping, Ryanair remains the most profitable of Europe’s low-cost carriers in terms of total net profits. EasyJet net profits were up 50% to £398 million ($621 million) in its financial year ended September 2013. While Ryanair remains a much bigger carrier by passenger numbers – at over 81 million it carried more than 20 million more than EasyJet – the latter’s higher average yields means that its revenues are only a little behind the $6.76 billion of Ryanair.

Some of Europe’s smaller fast-expanding carriers grew at a much faster rate in 2013. Norwegian – which launched its first long-haul operations during the year – Wizz Air and Pegasus all grew revenues nearly a fifth in 2013. Vueling revenues for the eight months it has been part of IAG in 2013, at €1.13 billion, outstripped the previous year by nearly 6%. The Spanish carrier’s revenues across the full year improved 28% to $1.9 billion as it lifted capacity more than a fifth.

Despite their rapid growth, these carriers remains around third the size of EasyJet and a quarter of Ryanair by passenger numbers.

Europe’s five largest carriers have also been busy in the aircraft market. All five have placed major aircraft orders with Airbus or Boeing over the last 18 months to underline their growth. It means Europe’s six largest low-cost operators have a firm order backlog of more than 800 aircraft.

As this capacity begins to get rolled out – Ryanair, for example, ends it growth hiatus by taking the first of its new order for 737-800s later this year – Europe’s operators are increasingly looking to expand outside of their home market. So it is perhaps inevitable that there will be more direct competition between rivals from the sector.

New bases pit Ryanair against Vueling in Rome Fiumicino and Brussels, and against EasyJet in Athens and Lisbon. Norwegian is expanding at EasyJet’s London Gatwick base, and launching at Vueling’s Barcelona home. 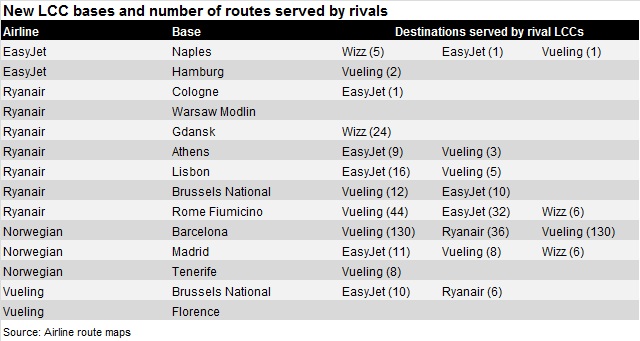 While there is increasing overlap, Oliver Sleath, European airlines analyst at Barclays, believes the main target of the low-cost carriers is still the legacy carriers.

“I don’t think that it is either Vueling or Ryanair’s intention to go and kill other LCCs, it is to take share off the legacy carriers,” says Sleath. But he adds Ryanair “probably has the ego and balance sheet and cost base” to get involved in a price war with a rival if needed.

But he notes, for example, that Ryanair has been operating out of Vueling’s Barcelona home for nearly five years. The latter has continued to thrive, while Spanair was ultimately the carrier that fell.

Ryanair finance chief Howard Millar, while also stressing the big opportunity is network carriers continuing to cut back, says given the size of its operation and number of airports across it network, “we’re always going to have spats somewhere”. A couple of years ago, that was Wizz at Budapest, he notes. He believes that in such cases Ryanair would feel on “home ground” in any fares war because of its cost base. “Our experience of the low-fare industy is once we are in a fare war, it’s the lowest fare which win by some distance. If it’s a slugging match, it’s the person with the biggest balance sheet and lowest costs that wins,” he says.

Struggling Alitalia is no doubt in the sights of both Ryanair and Vueling in their moves at Rome Fiumicino – an airport where EasyJet is already firmly established.

It is “too early to say” how increased competition between the three LCCs on routes from the Italian capital will hit yields, says EasyJet chief executive Carolyn McCall. She concedes that it could take six to nine months to “shake out” the market.

The Luton-based airline’s chief says Vueling is competing on both international and domestic routes, while EasyJet focuses on international services and Ryanair primarily on domestic routes. Rome is becoming “increasingly important” for access to Italian markets, she says.