Next year, a Gripen fighter will emerge from the assembly line at Saab’s Linköping site in the south of ­Sweden, following more than 200 others before it. But in contrast to its forebears, this aircraft will embody a raft of new features, which the company believes will ensure the type’s continued production towards – and perhaps even into – the 2030s.

Currently in the early stages of assembly, aircraft 39-8 is the first of three prototypes to be manufactured in support of the Gripen ­E/NG programme, including one for static testing.

While it will closely resemble the ­single-­engined design first flown in December 1988, the new version is larger, more powerful and better armed than the C/D model now flown by the Swedish air force and export customers the Czech Republic, Hungary, South ­Africa and Thailand.

“We are well on our way to present the best fighter there is,” says Saab deputy chief executive Lennart Sindahl of the new model, which has already secured firm orders from Sweden and Brazil for a combined 96 units.

Key elements of the Gripen E are already being tested in flight using a two-seat demonstrator. These include its GE Aviation F414G engine, repositioned main landing gear – moved from the fuselage to the wing to provide additional fuel capacity – and a Selex ES Raven ES-05 active electronically scanned array radar and Skyward-G infrared search and track (IRST) sensor. The demonstrator also has seven hardpoints for weapons ­carriage, up from five, with the one position beneath the fuselage increased to three.

Named 39-7, this aircraft retains the ­Gripen C/D’s avionics in its front cockpit, and parts of the new model’s equipment for the rear pilot – including the ability to ­control the radar and IRST. Using this ­method, the company “can go through changes quite quickly” without compromising flight safety, says Hans Einerth, wing commander flying at Linköping.

To date, aircraft 39-7 has flown 315 sorties totalling a combined 281h. Other systems – such as a new air data computer, wingtip-mounted radar warning receivers and a ­jammer installed in the top of the tail – are first being flown using Gripen C/D test assets.

“We are collecting data, so we can put it in our models for the simulators and know how the sensors perform,” Einerth says. “The work we are doing now will define the human-machine interface for 2019,” he adds, referring to the year in which first deliveries will occur.

The first flight of prototype aircraft 39-8 will be monitored in real-time by around 25 test engineers and 25 system engineers from a new control room in Linköping, ­nicknamed “Houston 2”. The Gripen E is ­expected to require around 1,500 test flights, which Saab says will be 40% less than on the C/D programme.

“We are using simulators and desktop simulation running 24h a day to find where we have the biggest weakness in the system,” says head of flight test and verification Mats Lundberg. “Then we use flight test to verify that the models are correct.” 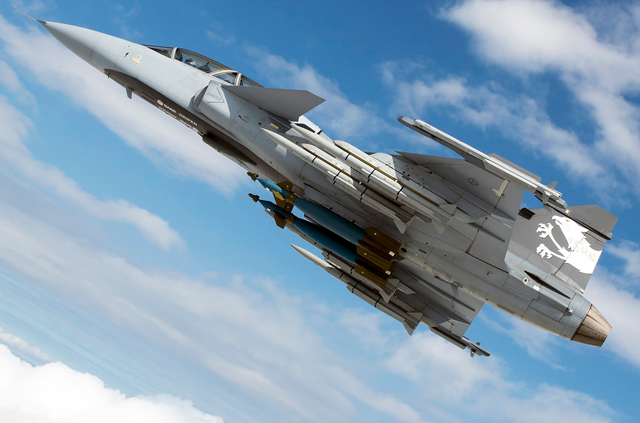 Einerth claims that the E model will be comparable to the Lockheed Martin F-35 in terms of its standoff-range weapons and electronic warfare systems; the latter of which he refers to as a “game changer” for the Gripen.

Sweden will be the first to receive the new aircraft, with 60 single-seat Gripen Es on order. However, a recent spike in quick reaction alert activities linked to increased military flights by Russia over the Baltic Sea has prompted the government to indicate that a further 10 of the type could be acquired after 2020. If funded, this would move the ­defence ministry closer to its long-term objective of operating up to 80 examples.

The air force – which currently has an ­inventory of almost 100 C/D-model aircraft – is expecting to declare initial operating ­capability with a first squadron of Es during 2023, with full operating capability to follow in 2026.

Confirmed last October, Brazil’s F-X2 ­programme acquisition is for 28 Gripen NGs, plus eight two-seat examples. The exact­ ­configuration of the export customer’s aircraft has yet to be finalised, but mock-ups of the fighter and its advanced cockpit were ­displayed at the LAAD show in Rio de Janeiro in April.

“We are aiming for synergies between the Swedish and Brazilian programme – 90 to 95% of the product is similar,” says head of aeronautics Ulf Nilsson.

Saab and local programme partner Embraer have completed arrangements for production and delivery, with the Brazilian air force’s first aircraft due to enter flight testing in 2019. The nation also is looking at a “bridging” solution using C/D-version fighters prior to the readiness of its NG-model.

Saab expects the Brazilian government to conclude its financing arrangements for the NG acquisition before the end of the second quarter of this year. The deal is the company’s largest ever-export success. Embraer personnel will begin arriving in Linköping later this year, with the company to be heavily involved in the development of the two-seat version.

Embraer’s local production line could be responsible for building around 10 of the nation’s first tranche of 36 aircraft, according to Jerker Ahlqvist, Saab’s head of Gripen. A decision on a second batch – again for 36 units – could be anticipated during 2019, he says, while Brazil’s eventual requirement could top 100 of the type.

Brazil’s potential interest in a Sea Gripen development could also solidify, although not before around 2025 due to uncertainty over plans to replace its navy’s current aircraft carrier. Design studies have already been completed by Saab, but further work on such a variant could be included in its technology transfer arrangements with Embraer, Nilsson says.

Saab says its development of the Gripen E is on schedule and on budget, and that the all-digital nature of its design has proven successful during the early stages of final assembly with lead prototype 39-8. “The sections fit together immediately,” Ahlqvist says, adding that the increased use of machined parts means the structure is also stronger and faster to build.

Such advances should see Saab hit peak efficiency much sooner than with previous programmes. “In the past, it took up to 180 aircraft to reach optimal production,” Nilsson says. “Now we are at 30 – and it could be lower.”

Current expectations are for first delivery slots to appear for potential new Gripen E customers during 2022. “We are talking about 24 months [from contract award] for an E/F delivery, once it’s up and running,” Nilsson says.

Multiple additional deals are being pursued, with market engagement having grown since the F-X2 selection in December 2013. “Brazil has changed everything for us – the interest has grown dramatically,” says Ahlqvist.

Numerous nations are being offered potential deals to either acquire the new-generation Gripen from early in the next decade – or sooner from a large potential stock of surplus fighters, which could be rapidly brought up to the latest C/D-model operating standard. New-build examples of the latter could even be supplied, if requested by a buyer.

“Not all countries need the extended range and advanced sensors of the E/F,” Ahlqvist notes. “The C/D is still a very capable aircraft, and there is development going on for beyond 2025.”

Versions of the Gripen’s MS19 software standard are being used by all five operators today, while the Swedish air force will become the lead user for the new MS20 configuration from later this year. It will then gradually become available for other nations, bringing the potential to use an expanded range of precision-guided weapons – including MBDA’s Meteor beyond visual-range air-to-air missile and Boeing’s Small Diameter Bomb – and advanced electronic warfare capability.

Longer-term enhancements proposed for the current model include a Mk4 upgrade for the Saab Microwave Systems PS-05/A radar, which the company says will deliver a 100%-plus increase in detection range capability.

Sweden currently has a stock of early-model Gripens in storage. “We are looking at significantly more aircraft available for modification from A/B to C/D,” Ahlqvist says, although he declines to give a specific number. A rapid turnaround is offered, as some nations could need to field fighters within 18 months to two years of a selection decision. 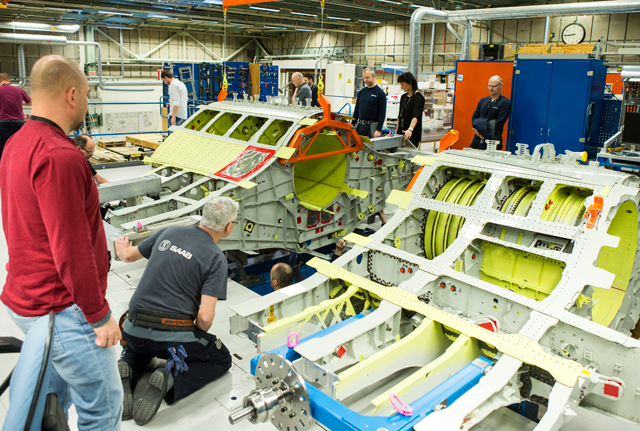 The Czech Republic and Hungary each operate 14 leased examples acquired via the Swedish Defence and Security Export Agency (FXM), and have expressed interest in potentially increasing their fleets by up to a further eight and four, respectively. A similar deal appears to be on the cards for Slovakia, which has selected the Gripen to replace its RAC MiG-29s. Saab expects the nation to acquire between eight and 12 examples – likely to be stored A/B models upgraded to a similar standard to Prague’s interceptors. A contract is hoped for later this year.

Also in eastern Europe, Bulgaria and ­Croatia are being offered Gripen C/Ds – although against stiff competition in the form of a US proposal to deliver secondhand Lockheed F-16s.

The new-generation E-model could potentially meet the future requirements of Austria, Belgium and Portugal, Ahlqvist believes. Finland has already been supplied with information about the development ahead of an anticipated contest for between 40 and 60 aircraft.

A request for proposals could be issued in 2018, with a contract to follow around 2020. Helsinki is expected to also look at types including the Eurofighter Typhoon and F-35, but Ahlqvist notes: “they don’t want to buy an aircraft that has reached the end of development – they want something with future growth.”

He also believes that Switzerland will revive a fighter acquisition process that ended in frustration for the company in April 2014, when a planned buy of 22 Gripen Es was narrowly defeated in a public referendum. “We believe the Swiss will come back in a couple of years’ time,” he says.

Asia is also a major area of focus, with perhaps the best opportunity to be found in India.Following the apparent collapse of its air force’s medium multirole combat aircraft process and a smaller-than-expected initial order of 36 Dassault Rafales now being mooted, “there are clear signals that something else could be needed,” says Ahlqvist. “Should there be a requirement we are there and ready to work with India to set up ­technology transfer.”

With the indigenous Tejas having failed to meet customer expectations, a new single-engined fighter requirement could be for between 150 and 200 ­aircraft, Saab believes.

Ahlqvist notes that the current lone operator in the region – the Royal Thai Air Force – reported “excellent results, with outstanding availability” after participating in a Pitch Black-series exercise in Australia late last year. Indonesia, Malaysia and the Philippines all are prospective customers, he adds.

Saab – and Embraer – will be hoping that the sales success in Brazil could lead to ­follow-on opportunities in Latin America. Promotional activities could be conducted for Colombia, Ecuador, Mexico, Peru and Uruguay, most likely in conjunction with the Brazilian production partner, both for refurbished C/Ds and the new version.

However, Saab officials have played down a suggestion that the Gripen could be supplied to Argentina against the UK’s wishes. The topic has been included in previous government-to-government discussions between Argentina and Brazil, with no industry involvement, ­Ahlqvist says. For any future sale to be agreed between the nations, “either the [UK-Argentina] relationship has to soften, or there must be a way of changing systems”, he says.

In all, Saab believes between 300 and 450 ­Gripens could be sold over the next 20 years. Its ambitions also include the establishment of local maintenance and training hubs in ­several regions. “We spend much more time in countries like Indonesia, India and Brazil than we used to,” says Sindahl. “The focus is definintely on co-operation and partnerships for the future.”

“Airpower is very important for customers, and so is sovereignty,” Ahlqvist notes. “We don’t impose any limitations on what you can and can’t do with the system.” New weapons also can be fully integrated within as little as one to two years.

“Performance is everything – but then there’s cost,” says Nilsson. Comparing Sweden’s ­programme to acquire 60 Gripen Es with Norway’s to introduce 52 F-35As, he says: “We are one-third of the cost that the ­Norwegian state has set aside. The order backlog is at an all-time high. Before, Gripen was looking for a market – now there is a market looking for Gripen. If you join – C/D or E, you will always have a way forward.”