ANALYSIS: The changing size and shape of the world airliner fleet

There are many fronts in the commercial war between the big two airframers. In one crucial skirmish – size of global single-aisle in-service fleet – the Airbus A320 family is within a whisker of overtaking the Boeing 737, when old and current-generation types are combined.

These numbers, of course, do not take into consideration orders for the 737 Max and A320neo, which are yet to enter service – and on which more will be discussed later.

Both airframers reaffirmed their confidence in their most popular twin-aisle products during the past 12 months, with Boeing unveiling the 777X at Dubai in November, and Airbus announcing the re-engined A330neo – both backed with impressive launch orders. 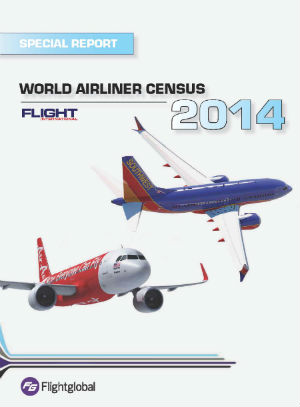 Boeing’s newest widebody, the 787, continues to make its mark, with in-service aircraft reaching 163, including the first -9 example – more than double last year’s total of 68. With production of the Dreamliner currently at a rate of 10 a month, this number should grow to close to 300 by next year’s census.

On the other hand, the 747-8 total is increasing slowly, from 44 to 62 in-service aircraft – the vast majority of them freighters. Retirements of the venerable jumbo are offsetting this growth, however. The 747 remains a top 10 mainline type, but its fleet has fallen from 623 aircraft in 2013 to 585.

Fortunes are less rosy for Airbus when it comes to its other widebody types. Seven years after entry into service with Singapore Airlines, the A380 fleet has reached 136 aircraft – up from 106 last year.

It is a respectable figure, but – with just 167 on order – the superjumbo is still far from the game-changing widebody Toulouse hoped it would be.

Meanwhile, the out-of-production A340 continues to be put out to pasture. With 266 in service – down from 298 last year – the four-engined airliner is the fastest declining type, only just clinging to its top 10 status.

Boeing’s other legacy aircraft – the 757, 767 and MD-80, together with its related airframes – continue to hold their own in the top 10. The youngest type – the 767 – is unsurprisingly the best performer, with its fleet falling by under 3% to just below the 800 mark. The -300 variant still has orders in the bag.

When it comes to regional aircraft, Embraer is consolidating its position as market leader. An 8.2% year-on-year increase saw the Brazilian manufacturer’s E-Jet range pass the 1,000 aircraft milestone in 2014. Even its legacy ERJ line-up saw only a 3.5% decline to 695 aircraft.

Elsewhere in the regional arena, ATR’s rebound in fortunes continues, with the fleet of ATR 72s growing by 14.6% to 581 aircraft – compensating for a decline in the number of the smaller ATR 42. Bombardier’s rival Dash 8 Q400 turboprop had a less impressive year, with its fleet increasing by 23 to 421. This takes it to just 30 aircraft short of the manufacturer’s legacy Dash 8 Q100/200/300 family, which saw a modest 3.1% decline to 451 aircraft.

Veteran types – the de Havilland Canada Twin Otter and Beechcraft 1900 – continue to hold their own in this segment.

Russian and CIS legacy aircraft continue to decline, with production of many types having ceased or grinding close to a halt as local airlines opt for Western products. The number of Ilyushin Il-76s has fallen from 116 in 2013 to 105 this year, Tupolev Tu-154s from 41 to 36 and Yakovlev Yak-40s from 45 to 32. The sole bright spots for Russian industry are the Sukhoi Superjet 100 – with 28 aircraft in service and 76 orders – and the yet-to-fly Irkut MC-21, which has a backlog of 92 aircraft.

The regional breakdown of the global fleet remains the same as last year, with Europe and Asia-Pacific both with a 25% share, behind North America’s 32%. However, when it comes to the backlog for Airbus and Boeing products, Asia-Pacific dominates, with 3,111 orders out of a total of 5,812. Two-thirds of the region’s commitments are for Airbus products. Toulouse also enjoys an advantage when it comes to European orders, although Boeing has more than two-fifths of orders from North American airlines.

Speed of retirements aside, orderbooks offer an indication of the likely shape of the world fleet over the next decade. The A320neo continues to lead the 737 Max in terms of backlog by around 1,000 aircraft. However, perhaps the flip side of Airbus’s success is that the 737NG is ahead of the A320ceo – although by a much narrower amount. New players – Comac, Irkut and Bombardier with its CSeries – have yet to make much of an impression. Their combined backlog makes up just 7% of the market.