ANALYSIS: The size and shape of the world airliner fleet revealed in our census

Airlines, it seems, cannot get enough of Airbus and Boeing narrowbodies. With the latest re-engined versions of the A320 family and the 737 due to enter service in the next two years, and both manufacturers sitting on hundreds of orders, deliveries of their existing single-aisle types have continued to mount over the past 12 months.

According to Flightglobal’s latest annual airliner census – a breakdown of the world’s fleet of commercial aircraft by type and operator – numbers of current-generation A320s and 737s in service rose by 7.9% and 9.1%, respectively. This was a faster growth in the fleet size than in the period between 2013 and 2014. There are now just over 6,000 A320 family jets in service and more than 5,100 of the current iteration of Boeing’s rival. 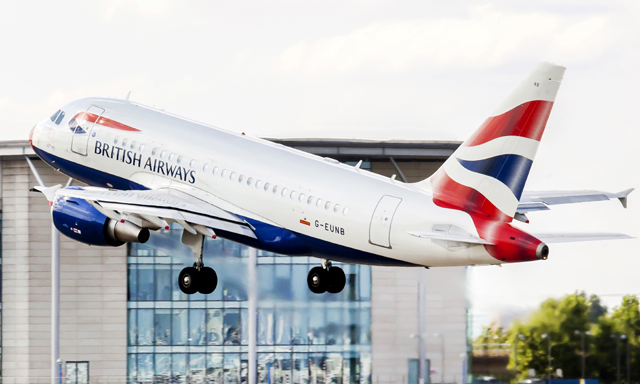 British Airways is one of the A318 operators

Because fast-expanding carriers are not prepared to wait for equipment that they need as soon as possible, Toulouse and Seattle have been in the envious position over the past few years of enjoying robust demand for their existing aircraft types, even though their successors are waiting in the wings. This has not been the case in widebodies, where production of, for example, the A330 is tailing off as Airbus prepares to introduce the A330neo.

The A320 family still tops the list of most popular mainline aircraft, although it is just pipped if older-generation Boeing 737s are added to the tally. In total there are some 6,100 Boeing narrowbodies in service (not counting the 717 and earlier McDonnell Douglas variants, of which there are 666), compared with 6,052 of the A320, which does not, of course, have an earlier vintage equivalent. A year ago, it looked like the A320 would soon overtake the 737 if old and current versions were combined, but higher deliveries of the Boeing narrowbody have ensured the gap remains.

Further down the list, the Boeing 787 has finally entered the top 10, displacing the long out-of-production Airbus A340. There are now 286 Dreamliners in service, a more than three-quarters rise on the previous year, and this figure will leap again next year as output ramps up. However, it may be a few years before retirements of other aircraft either out of production or nearing the end of the line mean the all-composite widebody vaults up the list. 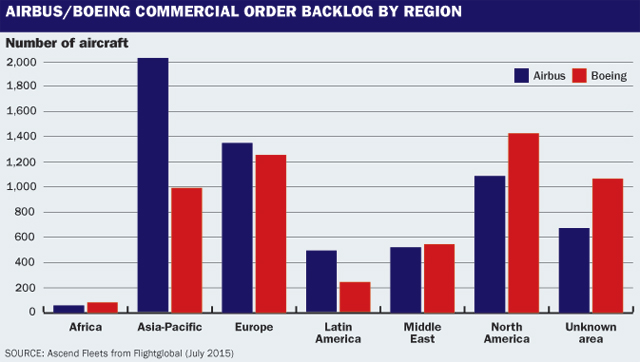 The order otherwise remains virtually the same as in 2014, the only other change being the 757 and 767 swapping places, due to numbers of the smaller aircraft falling faster (down 8.7% to 738 aircraft) than the still-in-production 767 (down 2.9% to 765 examples). The 777 remains in third place, with a 6.6% rise in the fleet. Despite output now slackening, the A330 had a good year in terms of deliveries with a 7.9% increase taking the fleet of the small Airbus twin-aisle to 1,095.

With the slow-selling Airbus A380 still far from troubling the top 10 and despite sluggish sales of the latest 747-8, the venerable Boeing jumbo jet remains queen of the skies when it comes to ultra-large aircraft with 571 in service, a modest decline of 1.7% from last year.

In regional aircraft, Embraer and ATR have been the biggest winners in terms of deliveries, with the Brazilian manufacturer’s E-Jet fleet having nudged over the 1,000 aircraft barrier last year, rising 10% to just over 1,100 aircraft. This puts Embraer in a strong position as it prepares to introduce its re-engined range. The fleet of ATR 72s grew even faster, by 11.2%, to 696 aircraft. In fact, when numbers of the smaller and less popular ATR 42 are included (its fleet stayed virtually firm at 250 aircraft), the Franco-Italian airframer is left with a tally of 946 aircraft, a remarkable success given the fact that many were writing off the brand a decade ago. 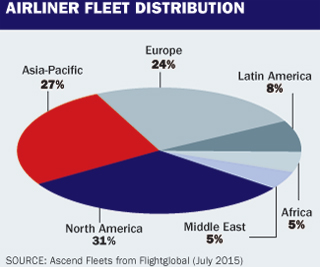 Troubled Bombardier may not have a revamped regional jet on the launch pad, as it continues to devote its energies to bringing its CSeries narrowbody family to certification, but deliveries of its three in-production CRJ variants remain robust, with a 7.6% increase in the fleet to 696 aircraft between 2014 and 2015. The fleet of its other in-production regional aircraft – the Q400 turboprop – grew by the same percentage, resulting in a fleet of 454. Numbers of older generation Dash 8s diminished, with the fleet of Dash 8-100/200/300s falling below their newer sibling.

Fleets of older and smaller CRJ variants – the CRJ100 and CRJ200 – have also shrunk substantially as airlines and passengers continue to fall out of love with thirsty 50-seat jets. A similar fate has befallen Embraer’s ERJ range. There are 7.3% fewer ERJ-135/140/145 aircraft flying around the world.

Deliveries of the Twin Otter are on the up again following the relaunch of the Canadian two-engined turboprop by Vancouver Island-based Viking. Last year, with Viking production only beginning to gear-up, retirements of older examples of the 50-year-old type saw overall numbers decline slightly. This year, the fleet is back up to 267 aircraft. The other out-of-production programme on the list has not surprisingly seen a drop in numbers, with Beechcraft 1900s declining by 3.4% to 341. 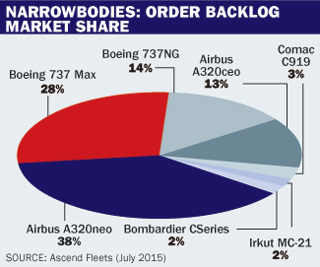 There have been some small but significant shifts in the distribution of the airliner fleet, mostly accounted for by Asia’s emergence as a major aviation region. Asia-Pacific now accounts for 27% of commercial airliners in service, up from 25% in 2014. In contrast, North America, which still leads with 31% of the fleet, has seen a 1% decline. Europe’s share has dropped by the same percentage to 24%.

Manufacturer orderbooks give us an indication of the likely future shape of the global fleet. The A320neo is still well out in front, with a backlog of 3,864 aircraft, representing 38% of total narrowbody orders. The 737 Max – which is behind its Airbus rival in terms of entry into service – is next with 2,825 orders, or 28%. Boeing’s current-generation narrowbody trumps its European competitor, with a backlog of 1,408 737s (14% of the backlog), compared with 1,267 for the A320ceo (13%). The new market entrants from Comac, Irkut and Bombardier make up the numbers with a combined 7%, or nearly 700 aircraft in total. The total narrowbody backlog is 10,052.