Northern Ireland has less than 3% of the population of the UK, yet of the four companies with the highest rating in a nationwide scheme to improve quality and competitiveness in the aerospace supply chain, two of them are in this corner of the British Isles. Investment agency Invest NI likes to point to this fact as an example of how the region punches above its weight when it comes to the capabilities of its aerospace companies.

The two firms awarded gold status in the Supply Chains for the 21st Century (SC21) programme – administered by trade body ADS – are Denroy in Bangor, near Belfast, and Moyola in County Londonderry. Both are family-owned, tier two aerostructures suppliers, employing between 100 and 150 staff and with revenues of less than £20 million ($25 million), but they produce very different products. While Moyola works mostly in metals, Denroy specialises almost entirely in plastics.

Moyola was founded in 1976 and produces build-to-print engine parts and structural components for civil and military applications. Customers include Bombardier in Belfast, for whom it manufactures ribs for the Airbus A220 wing, as well as Aerosud in South Africa, Austria’s FACC, GE Aviation, GKN, missile house MBDA, Saab and Thales. The company has been expanding fast, investing £15 million on new equipment in recent years, and in 2017 doubling the size of its plant by taking over the premises of a shirt factory next door.

This has given Moyola, which turned over £18 million in the past financial year and has 120 employees, room to grow further, says managing director Mark Semple. As well as adding equipment and floorspace, Moyola is aiming to develop new capabilities and has just installed a titanium milling machine. “It takes us to a much higher technical level,” says Semple. “We are leaders in soft metal, but we would like to get more into hard metal. That’s a definite ambition.”

Moyola plans to add another 30 employees in the next two years – and there is work out there – but Semple is cautious about simply expanding for the sake of it. “We have 25% capacity because we’ve invested so much,” he says. “The only thing holding us back is the pace we want to go at. Profit is nice, but for us, it is more important to maintain levels of service. That is going to have more impact on our future than a few extra pounds of revenue.” 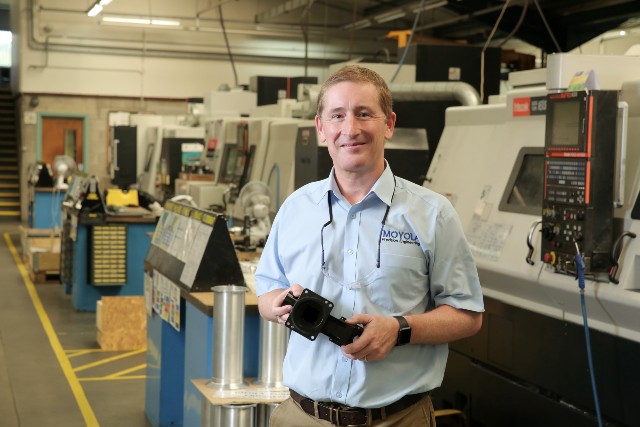 Denroy is unusual for an aerostructures business in that it began making plastic hair care products in the early 1970s – gaining fame when it won the endorsement of celebrity hairdresser Vidal Sassoon. In fact, hair care still makes up about half its £20 million turnover. The company moved into aerospace 20 years ago, largely producing build-to-print wing components for first-tier suppliers, including Aernnova, BAE Systems, Bombardier in Belfast, GKN, Spirit AeroSystems, and Triumph.

Much of its recent investment has been in developing techniques for moulding plastic components to metal, “which is what our customers are calling for”, says group finance director Kevin McNamee. In addition, the business, which has 210 employees, has “repositioned to become a very small tier one” by taking on design projects, including for Bombardier and Airbus, McNamee says. “We have a big focus on R&D."

Like Moyola, Denroy is expanding with a £3 million two-year capital expenditure plan, including a 1,200m2 (12,900ft2) extension to its main factory to create a new dedicated assembly area. The company is targeting a £30 million turnover in three years, with most of the growth coming from aerospace. “We feel we have a great future, as there is a demand in the sector for plastics to replace metal, because of the weight saving,” says McNamee. “Injection moulding for structural materials is a niche business – we don’t have too many direct competitors.”

In 2015, Moyola and Denroy were two small Northern Ireland companies behind a novel initiative to create a tier-one business in Northern Ireland, able to offer customers products in a variety of materials as well as expertise in design, project management and integration. The original concept behind Causeway Aero was for a consortium, but now it is a registered company in its own right, with Moyola and Denroy each holding a 20% stake alongside other shareholders from the province and venture capital investors.

This year, Causeway has appointed a chief executive, moved into premises in Lisburn, and made its first acquisition: Belfast stress engineering firm BASE. Causeway has also won its first contract, worth £2 million – not from Bombardier in Belfast, but from the group’s transportation arm – to build an antenna for one of its trains. However, the consortium is targeting aerospace, and has identified interiors – particularly galley retrofits – as a potential market. “We think it could grow into quite a business,” says McNamee.

The idea is that Causeway will bid for integration contracts for which Northern Ireland’s small aerospace suppliers would not have the range of capabilities to compete. As well as being shareholders in the business, Moyola and Denroy will act as suppliers. Both are hoping – along with Invest NI, which backed the move – that Northern Ireland will now have a second tier one aerostructures supplier alongside Bombardier.