A trio of new types on static display at the 14-16 July Royal International Air Tattoo (RIAT) showcased the near future of the UK’s fixed-wing training inventory for the first time.

First examples of the Grob Aircraft G120TP, Beechcraft T-6C and Embraer Phenom 100 produced for use as part of the tri-service UK Military Flying Training System (MFTS) were displayed together, as the focus for the new models turns to service delivery.

For the Affinity Flying Training Services team contracted to deliver the new assets, the shift from plan to reality has been remarkably swift. Just 18 months after the Elbit Systems/KBR joint venture was awarded a contract via the Ministry of Defence’s MFTS training system partner Ascent Flight Training, more than a dozen of its eventual 38 aircraft have already been accepted.

The bulk of this total has been G120TPs, with nine so far flown to the UK from Grob Aircraft’s Tussenhausen-Mattsies production facility in southern Germany since last November. A further two of the Rolls-Royce M250 turboprop-powered type have already been accepted, and remain at the manufacturer’s site in support of conversion to type training for UK personnel.

On 11 July, Affinity secured military release to service approval for the new elementary trainer. Representing the formal start of service delivery under its 18-year fixed-wing training contract, the milestone came as preparations with the G120TP “Prefect” gather pace at the Royal Air Force’s Barkston Heath and Cranwell air bases in Lincolnshire. This process had seen six of the delivered aircraft placed on the UK military register as of 26 July, with the next two expected to be added by the end of the same month, says Affinity managing director Iain Chalmers. 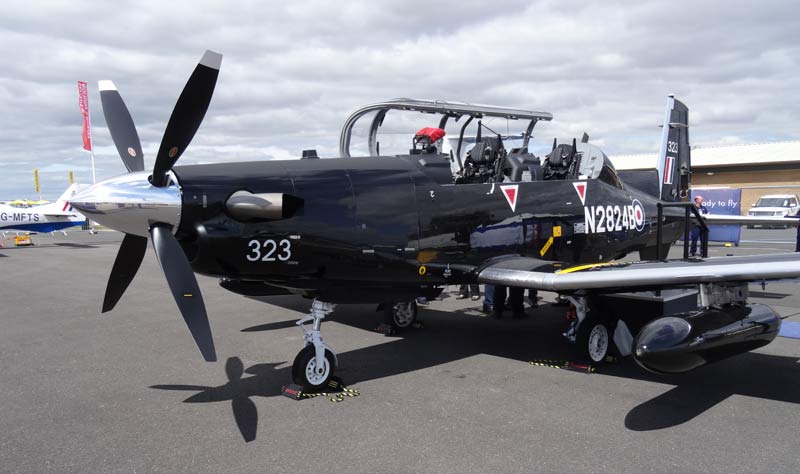 Being acquired to replace the services of the RAF’s G115E Tutor T1s, an eventual 23-strong fleet will be divided between the two bases. The last of these are scheduled to arrive in the UK around February 2018.

“All of the [G120TP] aircraft have run off the line on time or early,” Chalmers notes. Only minor modifications have been required for the UK programme, including the addition of an updated UHF radio, and an extra “down and locked” light on the landing gear; the G115E has fixed gear.

With the Prefect’s first scheduled ab initio students already in initial officer training at Cranwell and due to begin flying the type in January 2018, the current focus for the incoming fleet is on test and evaluation activities involving qualified flying instructors, and on preparing engineering personnel.

Infrastructure enhancements are also at an advanced stage, including the refurbishment of a hangar at Cranwell which now accommodates G120TPs, maintenance bays and Affinity’s offices.

Also on show at RIAT was the UK’s first of 10 T-6C basic trainers. Having made its debut in late May, the aircraft was flown from Beechcraft’s Wichita site in Kansas to the UK to appear at the event, before returning to the USA to receive a package of customer-specific modifications.

A lead pair of T-6Cs are scheduled to arrive back in the UK in February 2018, with the type to be based at RAF Valley in Anglesey, Wales. The small fleet will replace the RAF’s remaining Shorts Tucano T1s, operations with which are due to conclude during 2019.

In an early boost for the programme, Beechcraft announced in late June that it had received basic certification from the European Aviation Safety Agency for the T-6C. This advance will support “future configuration certification and delivery for the UK’s MFTS programme”, the company says. Enhancements over earlier models of the “Texan II” include the ability to carry external fuel tanks beneath the wing.

Beechcraft says the T-6C’s glass cockpit avionics and synthetic air-to-air and air-to-ground weapons training capabilities will help to instruct pilots in the use of “advanced systems and information management skills training required in current and future military aircraft”. To be flown by trainee fighter pilots before they transition on to the RAF’s Valley-based BAE Systems Hawk T2 advanced jet trainers, the type’s performance is described as “almost jet-like”.

Affinity says that while the T-6C is intended to deliver basic training services, it also has the ability to perform “more challenging and complex advanced training missions”, with the potential to “download” some tasks currently performed using the Hawk T2. “From Grob to Texan to T2, students will easily transition from one to the other,” Chalmers says. “We’re trying to make the [training] pipeline more coherent.”

The biggest challenge for the T-6C fleet will be the environment on the Anglesey coast. The RAF’s former Westland Sea King search and rescue helicopter hangar at Valley is currently being refurbished “to keep the weather out”, and Chalmers says preventative maintenance will be conducted to wash salt water from airframes and engines.

A first Phenom 100 was accepted by Affinity at Embraer’s São José dos Campos site on 4 July, and flown to RAF Cranwell just days before making its RIAT debut. The second of a currently contracted five of the twin-engined business jets has also been handed over, and is being used to support conversion to type training in Brazil. The remaining deliveries will be made before the type secures ready for training use approval in late December.

The new fleet of multi-engine trainers will replace the RAF’s use of Beechcraft King Air 200s from next year, with duties to include “crew resource management, high-altitude operations and multi-aircraft formation flying”. Limited updates include the addition of UK power sockets in the rear cabin, and adaptations to the aircraft’s UHF radios.

Additional Phenoms could, however, be acquired, with UK decisions to order nine Boeing 737-based P-8 maritime patrol aircraft – to enter service from 2020 – and retain 14 Lockheed Martin C-130J tactical transports until 2035 having created additional training demand.

Andrew Barrie, the head of KBR’s UK government division, attributes the Affinity team’s success with deliveries to date in part to a consortium decision to order aircraft “on-risk” four months before it received the private finance initiative contract in February 2016. These also are “the right planes, that are going to deliver the lowest-cost solution in terms of pilot training,” he adds.

“Delivery to the military is everything – we didn’t want to have a bad start to an 18-year relationship, so we made the decision that we would put our money at risk to start the process of the procurement of aircraft. We will be delivering good, modern aircraft in the right numbers, and we’ll be maintaining them to a very high standard to make sure they’re there for the full 18 years.” 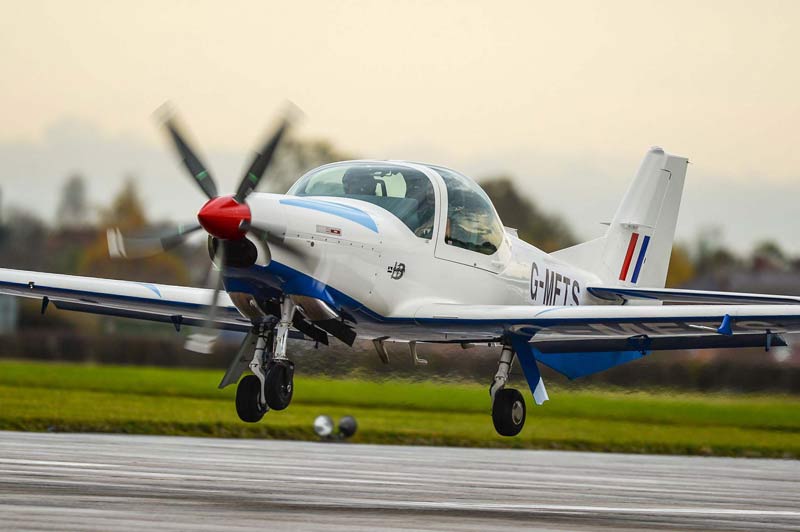 In addition to selecting and procuring the trio of new types, Affinity is responsible for programme management, maintenance and continued airworthiness assurance, dispatch and refuelling, and supporting infrastructure. At full-strength, the company will have more than 50 type-qualified engineers on its payroll, plus technicians and other personnel, taking the total to about 100.

The pending introduction of the three new fixed-wing types is giving the RAF an opportunity to assess its training needs and delivery methods, says Air Marshal Sean Reynolds, deputy commander capability and air member for personnel and capability.

“It’s about information management,” he says. “Our challenge is: how do we unlock the potential of the system, and get students through more quickly?” Reynolds’ target is for a new fast jet pilot to go through the whole training system in 3.5 years – versus five years currently, and for a multi-engine pilot’s current two-year time to be reduced by about 30%.

The use of 50% synthetic training on the new types will go some way to increasing efficiency, he says, with other steps also being studied currently. The balance of work to be performed on the G120TP, T-6C and Hawk T2 is also being looked at, and annual flight hours on the BAE-built type is due to rise from 7,600h to 9,200h. Along with downloading some tasks to the T-6C, this should enable the MFTS programme to train between 10 and 15 additional fighter pilots per year.

“It’s been a great journey – you don’t often get to start a company from scratch,” Chalmers says of Affinity’s rapid shift from formation to service delivery. But while the project is making major strides now, he notes: “The day we hit success is the day when the first student lands.”