Europe's A400M tactical transport programme will achieve a milestone later this year, when Airbus Defence & Space hands over its 50th production example of the "Atlas": roughly four years after it delivered a first example to the launch user, the French air force.

A less obvious mark was passed in late May, when the company transferred Atlas number 44. By doing so, deliveries of the four-engined type nudged beyond the one-quarter mark against its current combined eight-nation order book for 174 units. The aircraft in question was the ninth of an eventual 53 to be produced for the German air force, which will in time operate the largest fleet.

As well as France and Germany, whose combined commitments account for 59% of all Atlas orders, four other nations currently fly the A400M: fellow programme partners Spain, Turkey and the UK, and the lone export recipient Malaysia. Two more – Belgium and Luxembourg – will receive a combined eight examples from 2019. 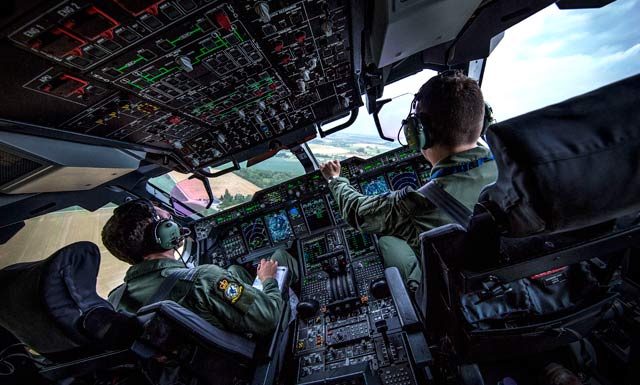 For Airbus, securing additional international customers for the versatile transport and tanker is a key goal, and one which is appears to be gaining some momentum after several tough years on the campaign trail.

While it has the Royal Malaysian Air Force as an A400M operator today, the company has previously lost South Africa as a potential buyer, while prospective partners Italy and Portugal also left the project before a launch deal was secured. This core deal, at that time covering 180 aircraft, was signed with seven countries via Europe's OCCAR defence procurement agency in May 2003.

Export ambitions remain high, with A400M programme head Kurt Rossner having previously outlined a target to sell 300 of the aircraft to further operators over a 30-year period. Speaking in late 2015, he suggested that orders for the first 50 could be secured within five years.

But Airbus finds itself in an unenviable situation, due to the high-profile development and production travails which remain a major headache, even as the A400M is becoming ever-more visible as its operator air forces build their fleets and deploy them more frequently at home and further afield. 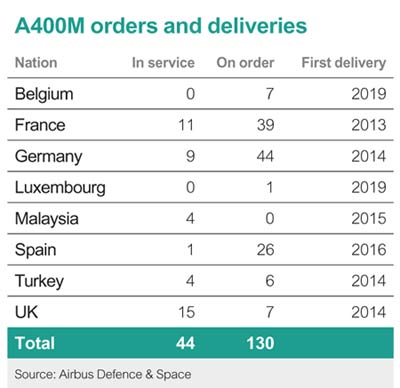 Delivery schedule disruption and operational restrictions linked to problems with the Europrop International TP400-D6 engine's Avio-produced propeller gearbox, and slips in introducing promised tactical capabilities, have seen the company take a succession of punishing financial charges against its contract.

In late February, the programme's latest crisis was confirmed, in the form of a €1.2 billion ($1.3 billion) financial charge announced as the company published its annual results for 2016. That penalty came on top of a €1 billion sum which had been announced by Airbus last July.

Airbus Group chief executive Tom Enders used the new charge as an opportunity to implore the programme's European customers to sit down with the company to define a new approach, which would reduce what he believes is the unfair financial burden being placed on it.

"We are asking them to re-engage with us in serious discussions to mitigate [financial penalties] and achieve a win-win situation," he said.

Enders lamented the decision taken by Airbus to agree to the original contractual terms for the A400M, which it had pledged to develop and introduce in a short time period by drawing on its vast experience as a commercial aircraft manufacturer. This was despite it having little ability to control the development of its complex propulsion system, which had been selected by the nations.

"It was clearly too short on budget and too short on timeline, plus we made an incredible blunder: we took responsibility, liability, for the engine," he said, with his frustration compounded by the agreed terms of a contract revision made in 2009, when the programme was "re-baselined". This has seen Airbus held responsible for paying liquidated damages for delivery delays and the late arrival of advanced capabilities.

While Enders' frustration was clear, he also spoke passionately of the A400M being a "world-beater" in waiting, noting: "I'm absolutely convinced that it's worth the effort, because we are building and delivering the world's best-performing aircraft once it is mature, and once it has a mature engine."

No details have emerged of the partner nations' willingness or otherwise to amend the deal to ease the burden now being carried by Airbus, but the manufacturer says a ministers' meeting was held on 30 March, which "both sides described as positive".

With such problems affecting its delivery of the transport, it is not difficult to see why Airbus has so far failed to add to its export backlog for the A400M, despite the opening afforded it by Boeing having ceased production of its C-17 strategic airlifter: seemingly the European type's main rival for sales, aside from Lockheed Martin's smaller C-130J.

A UK Royal Air Force A400M visited Indonesia earlier this year as part of a tour which also included appearances at the Langkawi International Maritime & Aerospace exhibition in Malaysia. At the same event, the Royal Malaysian Air Force became the first customer to complete its fleet of Atlas transports, with its fourth example presented. The service's 22 Sqn earlier this year performed its first airdrop of humanitarian supplies using the type, and has now amassed more than 2,000 flying hours.

The RAF aircraft also attended air shows in Australia and New Zealand during an extensive tour. Wellington is viewed as another possible future customer for the A400M, due to its need to replace an aged fleet of C-130Hs.

Mexico also has long been viewed by Airbus as a prospective Atlas buyer. In the most recent sign of the nation's potential interest, the Spanish air force sent its first example to participate in the Famex exercise. Deployed from its 31st Wing at Zaragoza air base, Madrid's first of a contracted 27 aircraft was delivered last December.

Other nations in Latin America are also considered to have potential as future buyers, while Airbus has also conducted previous demonstrations of the transport to multiple states in the Middle East. 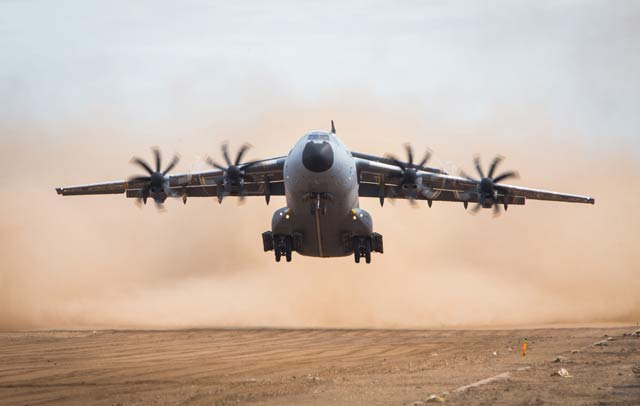 Development struggles aside, Airbus believes the type is a 'world-beater' in waiting

One of the factors of importance to potential export customers is the time required for their aircraft to be produced and delivered, and Airbus hints that it is looking to increase its flexibility via agreements with its core customers.

While Enders indicated in February that Airbus was likely to ship more than 20 Atlas units this year for the first time – in what would be a rise from the 17 delivered in 2016 – the company says it is "currently in discussion with OCCAR and the nations on the appropriate A400M delivery rate for 2017".

It says: "The final agreed figure will reflect a number of factors, including among others: the optimal fleet acceptance rate requested by each national air force operating the A400M; each customer’s desired balance between delivery dates and introduction of the enhanced certified capabilities being continually implemented; and to enable a smooth transition into the delivery of export aircraft when sales are secured. Due to these factors, this 2017 figure will not necessarily correspond to the maximum rate that could be achieved industrially."

Despite the requested changes to contractual terms being sought by Airbus, the core European buy of 170 aircraft remains unchanged. While Spain has indicated that it will be unable to afford to place all of its aircraft into active use, all will be manufactured. Germany, meanwhile, appears to have backtracked on an earlier suggestion that it would not take 10 of its planned 53 examples but would seek to find export buyers for them.

Airbus – which will commit one of its three-strong flight-test fleet to participating in the daily display at Le Bourget – says it is currently focused on qualifying further airdrop loads, increasing the number of paratroopers certified for a single drop, and investigating a crossover issue which has resulted in some restrictions during such personnel delivery activities. Its testing also involves the development and qualification of further defensive aids subsystem capabilities. All of this will advance the tactical performance of the Atlas, following the delivery in late 2016 of a first example – to the German air force – with clearance to operate in a hostile environment.

While urgently needed tactical capabilities begin to enter use, France and the UK especially are gaining increased experience with using the type to provide logistics support to combat operations, and also to perform long-range deployments.

One of the French air force's A400Ms accompanied its Patrouille de France aerobatic display team during a seven-week deployment to the USA, which concluded in early May. The transport carried 25t of freight in support of the commitment.

And glimpses of the type's tactical capabilities have been highlighted by regular appearances in the UK's "Mach Loop" low-flying training area in Wales. The four-engined type has been cleared to operate as low as 150ft during daylight, and 300ft by night.

According to a schedule released by Airbus one year after it signed its combined development and production-phase contract in 2003, it had expected to deliver as many as 30 A400Ms per year to partner nations and export buyers by 2012, and to now be into the latter stages of delivering on its core order, while international deals gather pace. 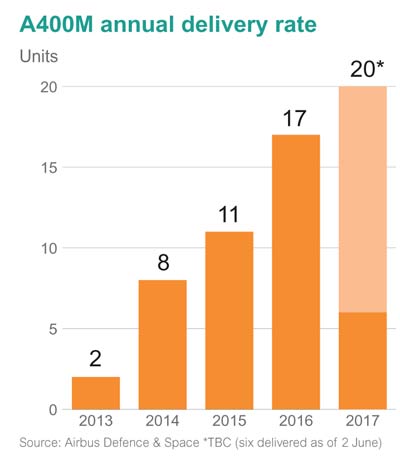 It has made a slow start, but with more than 20 units to potentially be handed over in 2017 and export deals appearing a more likely prospect, Airbus could finally be set to deliver on its tactical vision for the Atlas. With three-quarters of its contracted backlog yet to be transferred and OCCAR having previously outlined a production plan to run until at least 2024, it has time on its side.

One of the main beneficiaries of Airbus Defence & Space's difficulties with the A400M has been tactical transport rival Lockheed Martin, which early last secured an unexpected order boost for its C-130J Hercules.

When it was conceived, the A400M – also previously referred to as the Future Large Aircraft – was by its very essence a European alternative to Lockheed's ubiquitous airlifter, but one which would be capable of carrying more equipment and personnel over longer distances and at higher speeds. Of the programme's seven launch partner nations, five – Belgium, France, Spain, Turkey and the UK – had legacy versions of the C-130 within their inventories, while France, Germany and Turkey used the smaller C160 Transall.

The French air force has a contractual commitment to field an eventual fleet of 50 A400Ms, 11 of which have been handed over so far. But faced with the delayed introduction of tactical capabilities on the new Atlas, Paris has opted to also introduce a small fleet of C-130Js.

In early 2016, France ordered four J-model Hercules via Washington's Foreign Military Sales (FMS) programme. The US Defense Security Cooperation Agency had previously described this as having a potential value of $650 million.

According to a schedule released by France's DGA defence procurement agency, the nation's air force will receive a pair of C-130J transports late this year or early in 2018, followed by two KC-130J tankers during 2019. The latter are required to fill a niche requirement to refuel helicopters in-flight.

The French purchase has largely been spurred by a discovery made during initial flight trials between an A400M and an Airbus Helicopters H225M, which revealed stability problems with an underwing-mounted hose and drogue refuelling system. Airbus has subsequently investigated whether a new technique or adapted hose technology could help to resolve the issue, but it is uncertain whether the Atlas will be able to perform this role for combat search-and-rescue helicopters.

Already operated by the US Marine Corps and export customers Italy, Kuwait and Saudi Arabia, the KC-130J was a natural solution for Paris's problem, but one which will bring the financial burden of supporting a small sub-fleet of Hercules quite unlike its legacy C-130H transports.

However, the logistical consequences of the purchase could be reduced under a possible co-operation agreement discussed with the defence ministry of Germany, which has also expressed interest in possible purchase of between four and six C-130Js. Berlin has, however, yet to make a formal request via the FMS framework.

The introduction of the C-130J to the French and potentially German inventories will boost the new-generation Hercules' position among European nations, since Denmark, Italy, Norway and the UK already operate the type.