Last January, doubt abounded about whether Airbus would ever actually assemble A220s in Mobile, Alabama.

After all, a US trade panel had just shot down a looming import tariff, eliminating a central reason behind Airbus's plan to assembly A220s in the USA.

On 16 January, Airbus hosted a ceremony at Mobile during which top Airbus brass celebrated the groundbreaking of a site they say will begin assembling US-made A220s later this year.

The Mobile event capped three days during which Airbus executives stressed to reporters that the company remains on track in efforts to cut A220 production costs, boost production and land new customers.

The ceremony in Mobile 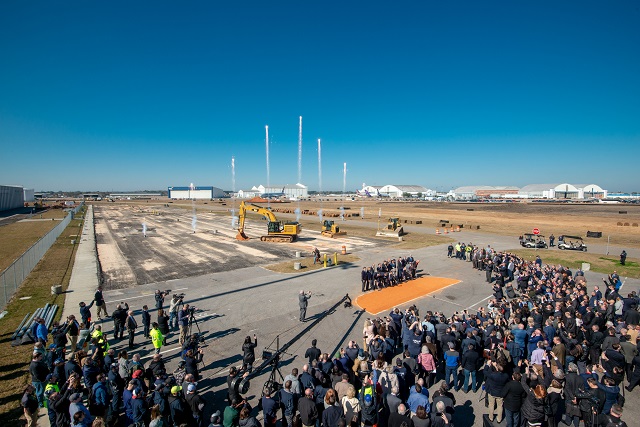 "This is a good product. To make it an economically viable product, it needs to be made at scale," says Airbus president of commercial aircraft Guillaume Faury. "We believe Airbus has the potential… to create the scale."

Not long ago, the viability of the programme was uncertain as former owner Bombardier struggled with financial troubles, a weak order backlog and an existential threat in the form of a Boeing-led trade dispute.

In the last 12 months, a US trade panel shot down tariffs and Airbus acquired CSeries (renaming it the A220). Then, to much surprise, Airbus continued moving forward with a plan to open a $300 million Mobile site – a facility originally proposed as a means to evade tariffs that, ultimately, never materialised.

Speaking on 16 January, Airbus chief executive Tom Enders defended the Mobile plan, saying a US A220 site makes sense in an atmosphere of protectionist sentiment – even if tariffs are no longer an immediate threat.

"But also, the single largest market for this aircraft, the A220, is North America," Enders adds. He also ties the A220 plant to Airbus' broader goal of expanding its US footprint. 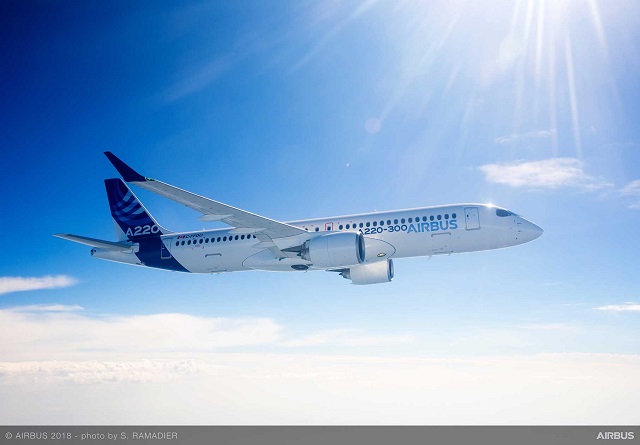 Airbus expects to deliver the first aircraft from Mobile in the middle of next year. The company already makes A320-family aircraft in Mobile.

The Mobile facility will have capacity to complete four A220s monthly by the mid-2020s, at which time the Mirabel site will be capable of completing 10 aircraft monthly, Airbus says. At those rates, the two sites, combined, would complete 168 aircraft annually.

But the state of the A220 order book (it stood at a moderate 537 aircraft at the end of last year) has raised questions about whether demand exists for two assembly sites.

Absolutely, say Airbus officials, citing recent sales momentum. In the past few weeks, JetBlue and Moxy each firmed 60-aircraft orders while Delta signed for another 15 A220-300s.

"You can expect that to continue. I am not concerned about filling the backlog," says Airbus Americas chief executive Jeffrey Knittel. "We are talking to a number of airlines and I am very optimistic with those discussions."

"Is there enough demand with our current backlog [for] two facilities? I think the answer is clearly yes," he adds.

Airbus estimates that in the next 20 years airlines worldwide will need 7,000 aircraft with 100 to 150 seats. That prediction bodes well for the A220, which Airbus says burns 20% less fuel per seat than other comparably sized aircraft.

"This aircraft has been designed specifically to that market segment," says A220 programme chief Philippe Balducchi.

Questions also abound as to whether Airbus can meet a 168-aircraft annual rate even if demand exists. After all, Bombardier had hoped to hit 10 aircraft monthly in Mirabel by 2020. That site delivered 33 A220s in 2018.

But Airbus insists the ramp up and cost-cutting efforts are progressing.

Airbus is seeking cost savings from suppliers while also bringing to the A220 processes and systems developed for other programmes, like the A350, executives say.

Previous issues with the A220's Pratt & Whitney engines have been addressed, and Airbus continues to address supply issues with Zodiac Aerospace, which makes the aircraft's cabin.

"It was a bit weak here, compared to what it should be," says Balducchi of the A220's supply chain.

But Airbus remains confident its global reach and experience will enable it to solve those problems.

"It is going to require a lot of work," says Balducchi. "With Airbus [we] have much better reach, both commercially and on the support side."

"We will turn it into a profitable product," Faury predicts.