This year’s first six months have again smashed the record for safe airline performance worldwide. What other commercial transport mode can claim that in the first half of 2017 – globally – there have been only six fatal accidents, and the total death toll was 16?

This celebration of the figures comes with the usual caveat: six months is a very short time, and a disaster tomorrow could change everything. But remarkably good figures have recently become the established state of affairs, so disasters themselves are becoming statistically more unlikely than they have ever been.

In our review six months ago of airline safety performance in 2016 as a whole, FlightGlobal Ascend director of safety and insurance Paul Hayes predicted that a zero fatal accident rate is within plausible reach of the world's airlines for the first time in commercial air transport history. So, January through June 2017 can only increase confidence.

The reason for the staggeringly low fatality figures is that all the fatal accidents except one involved freighters or other non-passenger operations. No passenger jets or passenger turboprops had fatal crashes, and the only passenger aircraft that did suffer one was a piston-powered Pilatus Britten-Norman Islander belonging to a Zimbabwean commuter and charter carrier.

Its two crew and four passengers all died when it hit high ground in stormy weather. Nervous fliers please note: the entire world's airline passenger fatalities total for the first six months of this year was just four.

Safety performance did not become this good by accident. Contributory factors over the years have included massively improved technology, but also an improvement in safety education and awareness at all levels within airlines. Some regions still remain safer than others, but everywhere there is gradual improvement. IATA notes that sub-Saharan Africa's safety performance in 2016 as a whole showed a marked improvement, and that trend appears to be continuing. Conversely, if complacency resulting from success allows hard-won lessons to be ignored or simply sidestepped, the industry could turn back to the practices of the bad old days. 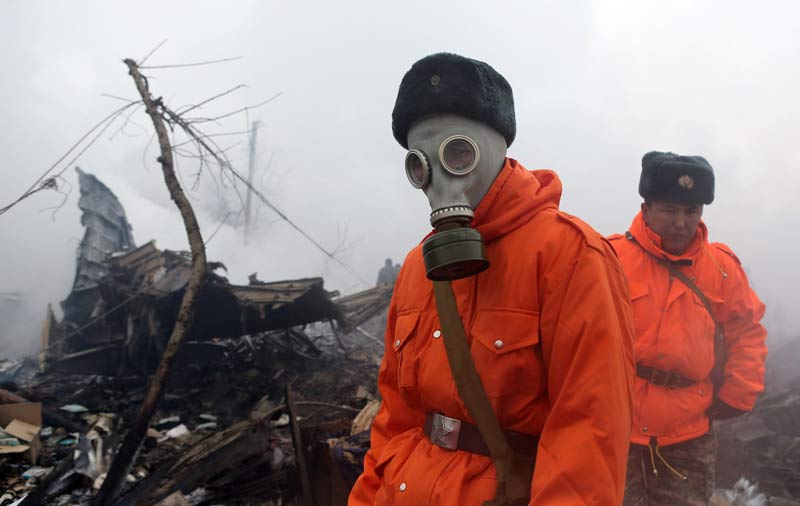 The best comparable results before now came in the first six months of 2015, but last year's first-half figures suffered a relative setback, demonstrating that nothing can be taken for granted. The industry’s task now is to remember the hard work it took to get so good, and consolidate the best practices that will enable the operators to keep it that way. Meanwhile, a glance at this year's non-fatal accidents tally (see accident listings), and those of recent years could provide indications of where fatal accident risks may still be lurking.

The greatest single killer risk still hanging over the industry is still loss of control in flight (LOC-I), though, and the European Aviation Safety Agency has just published a formal opinion on a new training policy to cope with this. This opinion prepares the industry to adopt the new rules in April 2018 with a transition period to final compliance by April 2019.

The core requirements, says EASA, are these: "The proposed pilot training aims to deliver enhanced pilot competencies through additional upset-prevention- and upset-recovery-related theoretical knowledge and flight instruction for the commercial aeroplane licences.

The newly developed advanced UPRT course, which is to be mandated as an addendum to ATP and MPL training courses and also to serve as a prerequisite prior to commencing the first type rating course in multi-pilot operations, is seen as an important step towards enhancing a commercial pilot’s resilience to the psychological and physiological aspects often associated with upset conditions."

The importance of this move cannot be overstated, because almost all the worst fatal airline accidents that have occurred in the last few years have been attributable to LOC-I at night or in instrument meterological conditions.

And since 2000, although there has not been a fatal LOC-I crash every single year, some years there were more than one. The average number of passengers and crew killed annually by LOC-I accidents since the millennium has been almost exactly 120. That makes it the one accident category that cannot be ignored despite recent encouraging overall safety performance results.

EASA adds: "In support of the new standards, the proposals place greater emphasis on the training of instructors involved in the flight and synthetic training who are to deliver the various UPRT elements." The agency emphasises that the rules harmonise with ICAO standards and recommended practices, so although the EASA announcement will affect pilots licensed in Europe, the same rules will apply around the world.

Details are emerging from the Russian investigation of an air force Tupolev T-154B trijet crash at Sochi in December 2016, and all the indications are that this was a LOC-I event precipitated by somatogravic illusion. The loss of control occurred during the early climb after a pre-dawn take-off. Cockpit voice recorder exchanges indicate that the captain, who was the pilot flying, was suffering from serious disorientation. All 92 people on board were killed when the aircraft hit the sea with a high rate of descent and steep bank angle when it should have been continuing its climb away from Sochi.

Another recent accident that wrote off a heavy business jet also has emphatic lessons for commercial carriers. On 7 January 2017 an MHS Aviation Bombardier Challenger 604 (D-AMSC) suddenly carried out three complete rolls to the left in succession while in cruise flight over the Arabian Sea.

The event was triggered – it is believed – by wake turbulence from an Emirates Airbus A380. An investigation has been carried out by German accident investigation agency BFU, but they found the recorders had been affected by the event and yielded limited information.

The Challenger was en route from Male, Maldive Islands to Al Bateen in the United Arab Emirates, but ended up diverting to Muscat, Oman, with serious injuries to five of the nine people on board. The 604’s airframe was badly overstressed and declared a write-off.

Pilot and cabin crew testimony indicates that the aircraft rolled several times after encountering the wake. The cockpit-voice recorder had already been overwritten by the time the aircraft landed at Muscat, the jet lost its inertial reference system data seconds into the upset and the flight-data recorder did not provide information on the aircraft's attitude, including pitch and roll. The aircraft commander told the BFU the aircraft had continued to roll to the left, completing several rotations despite his application of full aileron in the opposite direction.

Just after the upset began the left-hand General Electric CF34 engine started to lose thrust and the captain had observed that its inter-stage turbine temperature had increased to more than 1,000°C. The crew shut the engine down. The aircraft lost almost 9,000ft in altitude before the pilots recovered control at around 24,000ft, according to the crew. They subsequently used cross-bleed off the right-hand engine to restart the left. After restoring the second inertial reference system and eventually re-engaging the autopilot, the crew opted to divert to Muscat. No warnings of clear-air turbulence had been issued for the Arabian Sea.

In the light of this unusual event, EASA has seen fit to issue wake turbulence advice to pilots. It says pilots should be aware that reacting at the first roll motion, in the vortex core, can result in the roll being "potentially amplified". Attempted rapid roll-control reversals, it adds, can get out of phase with the aircraft's roll tendency and, as a result, exacerbate it.

EASA also stresses that the autopilot, in most cases, will "facilitate" a recovery, and that intentional disconnection can "complicate the scenario". The bulletin adds: "Try to avoid large rudder deflections that can create significant lateral accelerations, which could then generate very large forces on the vertical stabiliser that may exceed the structural resistance." EASA continues: "Typically use of the rudder does not reduce the severity of the encounter nor does it improve the ease of recovery."

Crews should anticipate potential wake vortex by maintaining an awareness of nearby traffic – especially heavy aircraft. It says crossing traffic climbing or descending poses a particular risk to flights at cruise altitudes, and heavier aircraft naturally present a greater threat to smaller types. Finally, the agency admits that although estimating the position of a vortex can be difficult, crews can look for contrails to assess risk, and use upwind lateral offset as a mitigation strategy. 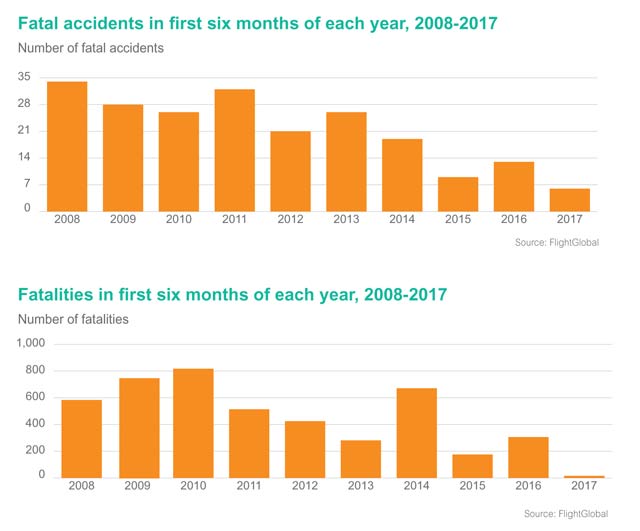 The association's Accident Classification Task Force has conducted a study into the situation, and IATA director general Alexandre de Juniac told an industry event in Seoul during the last week of April that, among those 300 available reports, “many had room for improvement". He added that, while the number of accidents has been falling, the number of investigations "may be declining at a faster rate". So far, IATA has refrained from identifying particular regions, authorities or accidents, but the task force's chairman, Dieter Reisinger, says the situation is present in "too much of the world" and the lack of timely and thorough reporting is "frustrating".

The ACTF has previously recommended that ICAO should identify and work with countries that do not have the expertise or resources to conduct adequate investigations. Reisinger adds that ICAO should consider "taking the lead" to identify specific regions that could benefit from accident investigation support.

But the quality of investigations is not only under scrutiny in countries that lack resources. UK aviation analyst Capt Steve Last has been highly critical of the investigatory quality of the Transportation Safety Board of Canada's just-released report on the serious but non-fatal 29 March 2015 Air Canada A320 crash at Halifax.

He points out that the TSB seems happy with the fact that the crew descended below minimum descent altitude without having sufficient visual cues to continue the approach safely. The aircraft hit power lines and approach lights before the runway. Instead of addressing the procedural failures and inadequacies, says Last, the TSB seems more keen to discuss issues such as crew sleep apnoea as potential factors before dismissing those as well.

Even in mature aviation nations like the UK, concern is growing that the resources made available to national aviation authorities, particularly human expertise, are being reduced, and that the move towards “performance-based regulation” policies is being used as a cover to make the industry more self-regulating, enabling a reduction in oversight. The final report and recommendations on the disastrous air display accident at Shoreham in August 2015 is cited as an example of the UK Civil Aviation Authority’s increasingly hands-off attitude.

So although the industry is, statistically, safer than it has ever been, there is evidence that this state of affairs might be seen around the world as an opportunity to cut safety oversight costs.

FlightGlobal is organising the Flight Safety Symposium, which takes place in London on 26-27 September 2017. Click here for details