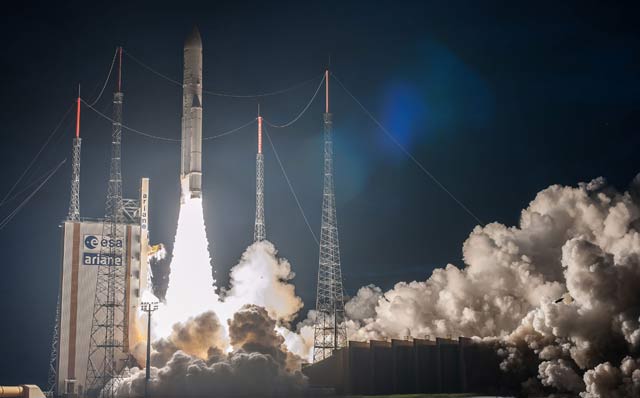 The Paris air show is famously attractive to Asia-Pacific customers of commercial airliners and military aircraft, but the region is also one of the world’s hottest markets for a higher-altitude aerospace segment: commercial satellite launches. Here, European launch operator Arianespace is a world leader and vying for business.

Indeed, Asia-Pacific is profoundly important market for the European launch provider. Since 1981, it has launched 78 satellites for 17 customers in the region. The company estimates that the Asia-Pacific comprises 25% of its overall launch business.

"The Asia-Pacific is a very important region and a very dynamic region," says Jacques Breton, senior vice-president sales and business development. "It is still growing as well."

FlightGlobal caught up with Breton at Singapore's annual Communicasia show, which brings together the elite of the Asia-Pacific satellite, communications and broadcast industry. Outwardly the stands resemble those found at air shows, but there are no aircraft models. Rather, the displays feature kit such as antennas, illustrations of transmission capabilities, and the odd satellite model. For somebody used to air shows, Communicasia is somewhat like a parallel universe – everything is the same, but different. The only name many aerospace executives will be familiar with is launch provider Arianespace. It has been a stalwart of the show for several years, with scale models of its Ariane 5, Soyuz and Vega rockets on display.

The company has had two successful launches for regional customers this year. Its Ariane 5 vehicle orbited Telkom Indonesia's Telcom 3S on 14 February, and kstat's Koreasat-7 on 4 May. Three other Asia-Pacific missions remain this year: the Indian Space Research Organisation's GSAT-17 and GSAT-11 satellites, and the BSAT-4a satellite for Japan's BSAT.

"Competitiveness is not just about price, but quality of service that you provide," says Breton. "On reliability, it is clear that launching a satellite successfully remains a must for a customer, a goal for us, and is always an achievement. Keep in mind that a launch mobilises a lot of technology, systems, pieces, parts and equipment. It takes a lot of involvement, and scrutiny on everything for the launch to be performed safely."

He notes that one of the company's competitors, Russia's Proton, has been suspended for nearly a year owing to a manufacturing defect and problems with a launch in June 2016.

"Customers are waiting for the launch, yet they are being postponed month after month," says Breton.

While SpaceX is an emergent competitive threat, the US operation has had its share of challenges, including the explosion of a Falcon rocket in September 2016 that destroyed a $200 million satellite owned by Facebook.

Breton admits, however, that price is a major factor in the launch industry, and that Arianespace works to keep launch prices as low as possible – provided it does not compromise quality. Breton adds that Euro weakness in recent years has helped. This is clearly a key consideration for him, given that he can easily rattle off historical exchange rate figures.

Breton also touched on the company's restructuring, completed last year, that made Arianespace a subsidiary of Airbus Safran Launchers (ASL). From its formation in 2014, ASL took 39% of the launch firm’s shares. ASL, prime contractor for Ariane 5 and its in-development successor, Ariane 6, subsequently took French space agency CNES’s 35% stake in Arianespace, bringing its shareholding to 74%. This was part of a broader plan to ensure cost-competitiveness by bringing design, build, sales and operation under one commercial roof.

"The reorganisation is going really smoothly," says Breton. "Being closer to the people developing Ariane 6 allows us to more quickly influence the design, transmit the needs of the customer, and really have the vehicle adapted to the market. Since ASL is in charge of technical activity, [the reorganisation] brings them closer to the market through us, helping them receive direct and more rapid inputs from the market. All is going smoothly and interfaces have been set up."

Looking to the future, Arianespace is already discussing its new Ariane 6 and Vega C launch vehicles with customers. The company is working with ASL and the European Space Agency on final details of Ariane 6, but it is also talking with several telecom operators about Ariane 6 launches, as well as some satellite operators who want to launch constellations of smaller satellites – a new capability being introduced with Ariane 6.

"We've been talking with customer about Ariane 6 and its capacity," he says. "We have attracted a lot of attention."

Breton and his team are also exploring more possibilities with companies which need to launch smaller satellites. There are differences with this market, however. While they are more numerous than users of larger satellites, they don't have the same resources and experience, thus requiring more individual attention and more technical discussions.

As for the rest of 2017, Breton says Arianespace is confident of achieving its objective of 12 launches for the year. That confidence indicates a robust operation at Europe’s spaceport in French Guiana; the 4 May Ariane 5 launch that orbited Koreasat-7 and a Brazilian defence and communications satellite had been scheduled for 20 March, but was delayed by some six weeks owing to a general strike in the territory, an overseas department of France.

Breton is especially pleased with the Soyuz launch of SES-15, for Luxembourg-headquartered satellite communications provider SES. The satellite was ready, but instead of waiting for a co-passenger to fill an Ariane 5 flight, Arianespace instead launched it to geostationary transfer orbit (GTO) as a sole payload on the smaller, mid-weight Soyuz – the first time the company used a Soyuz launched from French Guiana to put a satellite in GTO. From GTO, a satellite uses its own propulsion to slowly reach its final, geostationary orbit at about 36,000km.

That launch was the latest flight in a relationship with SES that goes back to 1984, and Arianespace has another five SES satellites in its backlog. The launch also highlighted the global nature of the business. SES-15 was built by Boeing in its El Segundo, California facility, and was the 53rd Boeing-built spacecraft to be launched by Arianespace. In this particular case, the satellite was notable for being SES’s first unit with all-electric propulsion, a technology that makes volume and mass normally consumed by fuel tanks available to working payload.