November will mark the sixth anniversary of China's first fixed-wing flight operations aboard the aircraft carrier Liaoning. Conducted with Shenyang J-15s – a clone of the Sukhoi Su-33 – the development was greeted with much pride in China.

The start of flight operations followed the launch of the Liaoning in 2011, after its transformation from an old Soviet Kuznetsov-class hulk, the Varyag. Although the effort involved both an aircraft type and a vessel from the Cold War era, it marked a renaissance in regional aircraft carrier development.

Beijing has gone on to develop a sister ship to the Liaoning. This vessel has been launched and could enter service in 2019. The People's Liberation Army Navy has long-term plans to build larger, more capable vessels, possibly powered by nuclear reactors. These could see the ski-jump ramps found on the Liaoning and her sister ship replaced with electromagnetic aircraft launch systems (EMALS). These would allow a wider variety of platforms to be deployed, and with greater payloads.

Richard Bitzinger, senior fellow at the Military Transformations Program at Singapore's S. Rajaratnam School of International Studies, expects that China will have four operational carriers by 2030. This does not include the Liaoning, which he expects will be retired in the 2020s.

India has a single operational carrier, the Russian-built INS Vikramaditya, commissioned in 2013 after years of delays. This warship, also of Soviet vintage, is smaller than the Liaoning. Based on the Kiev-class cruiser, it features a ski-jump in place of missiles and guns on the foredeck. A second locally built carrier, INS Vikrant, is set to enter service in the early 2020s – again, after years of delays. The Vikrant will also use a ski-jump. New Delhi also has plans for a vessel equipped with EMALS. Reports suggest that the US government is willing to provide this technology, produced by General Atomics. The Indian navy aspires to have three carriers: two active (one on each coast), with the third docked for maintenance. 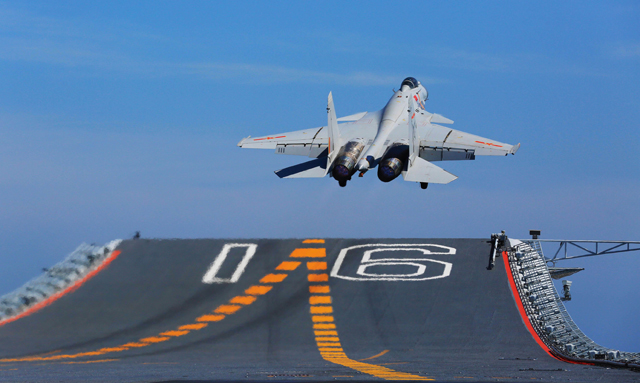 Launched by China in 2011, the Liaoning is operational with J-15s

Nick Childs, senior fellow naval forces and maritime security at the International Institute for Strategic Studies, says Beijing's carrier strategy, for the time being, is based on outclassing rivals closer to home and supporting a more assertive naval strategy. New Delhi's ambitions are more limited, namely dealing with regional challenges such as Pakistan.

There have been notable developments in "flat-tops" across the region, with Australia, Japan and South Korea all deploying such vessels in recent years. In the case of Australia and Japan there are periodic bursts of speculation that these vessels, designated specifically to carry helicopters, will one day operate the short take-off and vertical landing Lockheed Martin F-35B. Both nations have already ordered the conventional take-off and landing F-35A for their air forces. Japanese lawmakers recently called for Tokyo to develop its own aircraft carrier and equip it with F-35Bs, but given the nation's pacifist constitution this move would be highly controversial.

The real action, however, is in China and India, where national pride and sweeping oceanic ambitions drive naval developments. While their short take-off but arrested recovery (STOBAR) carriers offer impressive capabilities compared with local rivals, their ambitions in the catapult-assisted take-off but arrested recovery (CATOBAR) space will be a true revolution in Asia-Pacific naval affairs.

"Any catapult launch will give you the maximum launch performance of the aircraft you're firing off the carrier," says Tony Ogilvy, general manager aeronautics at Saab and head of the Sea Gripen programme.

"STOBAR always means that the aircraft leaves the carrier with less payload. A catapult shot means you're putting an aircraft into the air at its maximum payload, so a catapult-equipped carrier is a more effective carrier. It may be more expensive, but it's a more effective warship. Its aircraft can do more, carry more, fight harder, and stay off-board longer."

In a 30-year career with the UK Royal Navy, Ogilvy flew Blackburn Buccaneers, which required a catapult, and British Aerospace Sea Harriers, which launched from a STOBAR carrier equipped with a ski-jump ramp.

The Indian navy's Vikramaditya air wing comprises 26 RAC MiG-29K fighters and 10 Kamov Ka-31 helicopters. The larger Liaoning carries 26 J-15s, and up to 14 helicopters. However impressive these STOBAR ships are compared with other regional powers, their air wings are dwarfed by those deployed aboard USN carriers, which carry more than double the number of fixed-wing aircraft and helicopters.

"Although India has had more experience of limited carrier operations in the past, China seems to be moving ahead more quickly with its plans, and the development of its carrier capabilities are potentially the most significant in terms of how they transform its maritime capabilities and ambitions," says Childs.

China's only carrier-capable fighter, the J-15, is the heaviest carrier-borne fighter in current operation, with an empty weight of 17,500kg (38,500lb), higher than the Boeing F/A-18E/F Super Hornet's 14,600kg, but considerably less than the iconic Grumman F-14, whose empty weight was 19,800kg. Although the Vikramaditya is smaller than the Liaoning, it can carry the same number of jets, given the MiG-29K’s smaller footprint and empty weight of just 11,000kg.

While details are sketchy to non-existent, it is speculated that Beijing hopes to one day deploy the AVIC FC-31 stealth fighter aboard its carriers, replacing the J-15. The development status of the FC-31, which resembles the F-35, is unclear. AVIC has suggested that a foreign buyer is needed to move the type's development along.

India's future shipborne aircraft fleet is also open to question. While the Vikramaditya and Vikrant will operate MiG-29Ks, New Delhi issued a request for information for 57 multirole carrier-borne fighters (MRCBF) early last year. A request for proposals could come in mid-2018. In its request, the navy called for the future type to undertake roles ranging from air defence and surface strike to reconnaissance and electronic warfare. “Buddy” tanking is also a requirement. The request also expresses an interest in licence production of the aircraft, with related transfer of technology.

These jets would equip New Delhi’s possible CATOBAR carrier, referred to as IAC-2. This deal, for which New Delhi apparently wants to move beyond the MiG-29K, will be contested by such aircraft as the Dassault Rafale, Sea Gripen and Super Hornet. Boeing and Saab have both said their aircraft can operate from either a catapult or ski-jump.

In addition, India’s Aeronautical Development Agency continues work on the LCA Navy Mk 2, based on the Tejas platform. Powered by a single GE Aviation F414, this prospective type would be a major update of the original indigenous Tejas design, which has suffered a long and troubled development. The Indian navy has conducted tests with two F404-powered naval Tejas prototypes, which feature a strengthened airframe structure and landing gear, plus a tail hook. Should India ever develop a large, CATOBAR-equipped carrier, it is conceivable that it could host a mix of MRCBF fighters and LCA Navy Mk 2s.

For Beijing and India, a key benefit of CATOBAR carriers would be ability to operate fixed-wing airborne early warning and control (AEW&C) aircraft. While both currently employ helicopters in this role, fixed-wing aircraft offer better altitude performance and can carrier more powerful radars. For years, Northrop Grumman has quietly promoted its E-2D Hawkeye in India should a CATOBAR carrier be launched.

"There are reports that the Chinese are working on developing an aircraft-based AEW&C platform, possibly the [Xian] KJ-600," says Dean Cheng, senior research fellow at the Heritage Foundation.

"Given their steady pace of development, it should not be surprising if they are working on such a platform. It should also be noted that the air force has substantially increased its inventory of airborne early warning and electronic warfare aircraft. This suggests that the navy will probably not neglect either such capability."

The USN's aircraft carrier battle groups have been a fixture of military power for over half a century. They have played a decisive role in virtually every conflict in which the USA has participated, and remain a potent symbol of national will in peacetime. It is understandable that the rising powers of the Asia-Pacific region will try to attain this useful, and prestigious, capability.

Still, Childs warns that advances in technology, particularly unmanned systems, mean that naval aviation will evolve in the next 20-30 years.

"Carriers may be operating more unmanned systems, and there may be new platforms in service supporting unmanned capabilities, including in the Asia-Pacific region, that could look rather different to today’s carriers," he says. "And what will US carrier and naval aviation capabilities look like then? Will they still be centred on 100,000-tonne supercarriers, or with a greater variety of other platforms operating unmanned vehicles, to counter the threats posed to big carriers?"