Ten years ago, Bombardier shifted away from regional aircraft when it launched the CSeries, a move executives said would enable it to tap into a larger-aircraft market they viewed as otherwise ignored.

But with the transfer of the CSeries to Airbus planned for 1 July, Bombardier returns to familiar ground, focusing again on the regional aircraft that defined the company before the CSeries.

Bombardier's executives describe the transition as an opportunity, citing rising demand for regional aircraft and a recent uptick in Q400 sales. They insist their CRJs, even without engine upgrades, remain efficient and competitive – particularly in the USA.

"With the CSeries moving to Airbus control – that does free up our ability to re-energise, refocus on the regional market," says Bombardier president of commercial aircraft Fred Cromer. "We are in transition mode."

Speaking to reporters during a press event at Mirabel International airport in Quebec, Cromer says Bombardier never ignored regional aircraft while it developed the CSeries. But the high-profile CSeries programme did overshadow the company's regional aircraft product improvements and sales successes, he says.

"Behind the scenes, we have been equally focused on our regional jet programme," Cromer says. "The product we are producing today is a very different product than we produced years ago."

The company estimates airlines worldwide will need 5,750 aircraft in the 60- to 100-seat range in the next 20 years, with North American carriers set to take the lion's share in the form of 1,400 aircraft, according to Bombardier's most recent fleet forecast.

"I think we should be targeting 50% [of that market]," Cromer says.

"Our focus is going to be on aftermarket equally to selling new airplanes," Cromer says.

Since delivering the first CRJ700 in 2001, Bombardier has sold 899 CRJ NextGens, nearly 600 of which have gone or will go to US airlines, according to the company and Flight Fleets Analyzer. Bombardier has unfilled orders for 67 CRJs.

Operators worldwide have bought about 635 Q400s, of which about 60 remain in Bombardier's backlog, data shows.

Prime competitor Embraer has sold more E-Jets, though Embraer's products do occupy a slightly different market – E-Jets range between about 70 and 146 seats. As of the end of March, Embraer had sold 1,835 E-Jets, including a backlog of 421, the Brazilian company reported. 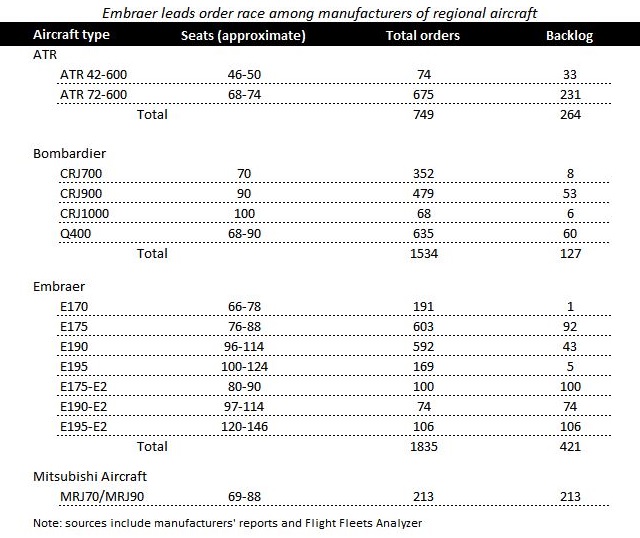 Orders for regional jets have slowed in recent years, but Bombardier's executives describe their products as on an upswing.

They note product improvements and recent sales, including orders this year from American Airlines for 15 CRJ900s and from Delta Air Lines for 20 CRJ900s.

"Our backlogs are getting stronger and stronger. We see a very bright future for both the Q400 and the CRJ," Cromer says.

"The atmosphere cabin is addressing the comfort side," says Cromer. "The CRJ, I think, has a lot of opportunity in the USA."

Indeed, US airlines operate more CRJs than airlines in any country – about 900 of the 1,400 CRJs in service worldwide, Fleets Analyzer shows.

Bombardier says it has improved the CRJ's fuel efficiency by 6.5% since 2010, thanks to tweaks that have included a different exhaust nozzle.

"What we are hearing from the airlines is that the airplane is still very cost competitive," Cromer says of CRJs. "It's one of the lowest-cost tools that they have, if you look at trip cost."

Executives insist Bombardier has no intention to replace the CRJ's General Electric CF34 turbofans with more-modern engines – at least not with the state of current technology.

"It does not make sense… on a pure fuel burn basis because there is not enough flight time to recover the amount of weight you put on it," he says.

That calculation – not so-called "scope clause" restrictions in US airlines' pilot contracts – undergird Bombardier's decision not to re-engine, Baudis adds.

"Whether there is a scope clause or not, the economics are the same. We still end up with a better plane," Baudis says.

Bombardier has about doubled its Q400 backlog in one year, thanks to orders from Ethiopian Airlines, Philippine Airlines, India's SpiceJet, a company affiliated with TAAG Angola Airlines and others. Bombardier also now sells 90-seat Q400s, which cost 15% less per seat than 78-seaters, Bombardier notes.

Ethiopian Airlines and its partners operate 22 Q400s, and Ethiopian has orders for another 11 of the type 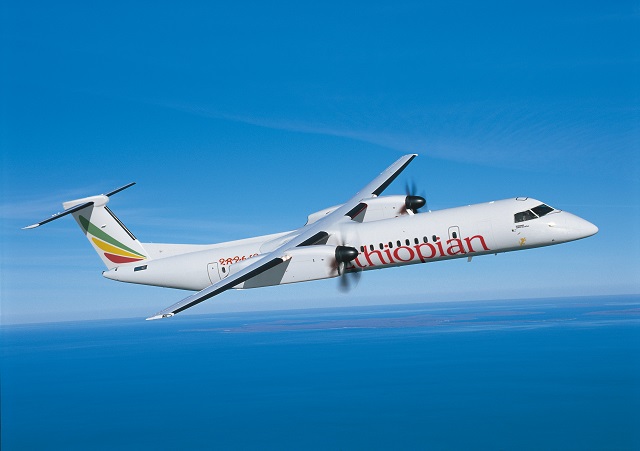 Cromer suggests Bombardier might soon offer an Atmosphere cabin for the Q400.

Though Bombardier has said little about what other changes lie ahead, Cromer insists the company "will not be sitting still".

But the future remains uncertain, and questions about Q400 production resurfaced this year when Bombardier sold its Downsview site in Toronto, home to the Q400 assembly line.

The operation can remain at the site for five more years, but Bombardier eventually intends to move production elsewhere. Observers have speculated that work could move outside Canada, but Bombardier has released no details.

"It presents an opportunity for us to think about where we are going to build that aircraft going forward," Cromer says. "We have an opportunity to… think of lower-cost opportunities."