ANALYSIS: Cabins set for tech overhaul, from toilets to trolleys

That was the message from a leading aircraft manufacturer and many providers of in-flight entertainment this week at the Airline Passenger Experience Association's annual expo, the event at which the industry rolls out its latest cabin concepts.

Talk of digital services, data collection and in-flight connectivity dominated the event, with companies insisting such technology will allow forward-thinking airlines to prevent maintenance disruptions and squeeze more money from passengers and advertisers.

The concepts, not all new, include IFE systems that target specific passengers with specific advertisements, then allow passengers to buy all manner of items – with airlines taking a cut.

Airbus used the show to unveil its new "connected cabin experience", a concept that involves outfitting an aircraft cabin with countless digital sensors.

"The major idea is, that we… provide and enable seamless wireless data connection on board – that we connect all the elements of the cabin," said Airbus vice-president of cabin marketing Ingo Wuggetzer during the show.

Airbus displayed the idea at its booth, inviting customers to sit in a row of sensor-laden aircraft seats made by Recaro, branded iSeats. As soon as anyone sat down, a digital tablet (to be carried by crew) immediately marked the seat as occupied. 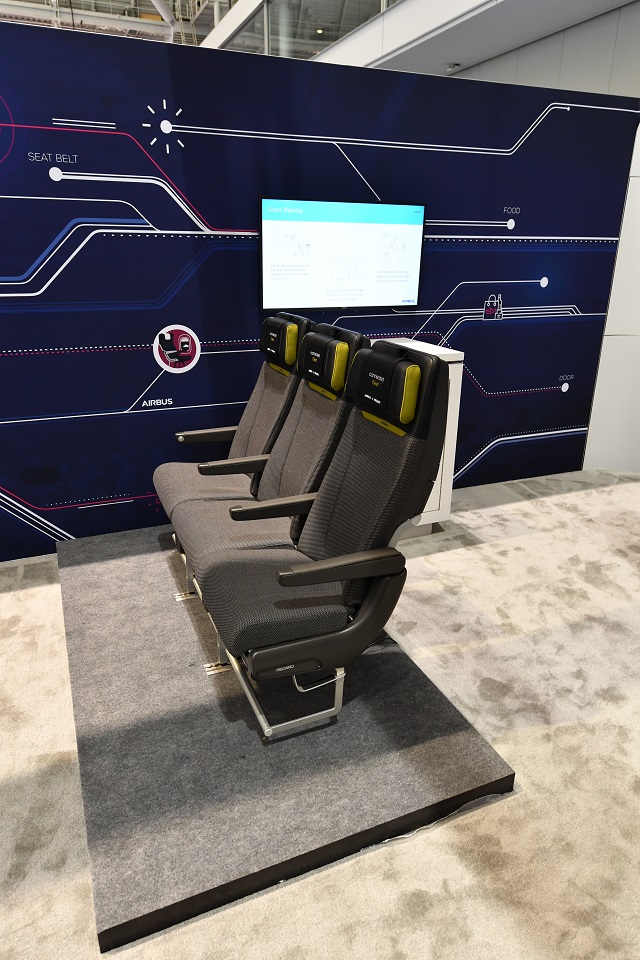 Raise the armrest, lower the tray table, recline the seat – the tablet reports it all. Seat sensors could even record body position or more personal readings, such as body humidity, says Airbus.

Other sensors could monitor use of lavatories. Are papers towels running low? How many times did the toilet flush?

Sensors could even monitor the position of the little red latches that secure drink carts, Airbus says. 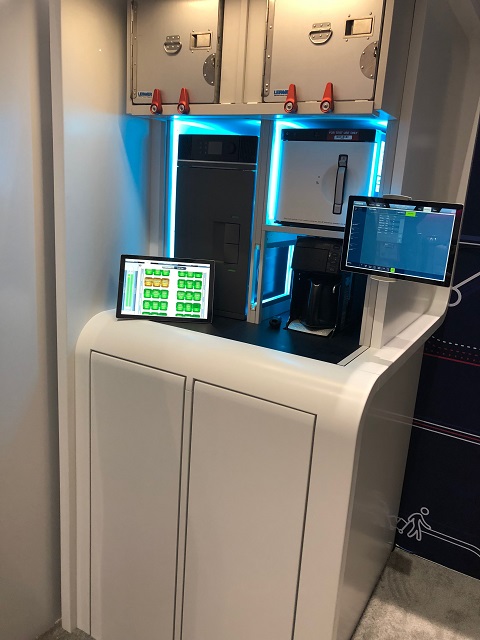 There are good reasons for it all, says Wuggetzer.

For starters, sensors can track food and beverage inventories – or anything else – ensuring airlines replenish stocks.

More importantly for the bottom line, data can let airlines begin applying the same predictive maintenance techniques in the cabin that they increasingly apply to engines and other major aircraft systems, says Airbus.

The airframer aims to tie cabin data into its existing aircraft predictive maintenance product called Skywise, which is already in service with a number of airlines. Skywise collects aircraft operational data, crunches the numbers and provides varying degrees of predictive feedback to carriers.

"We are widening the approach of Skywise to the cabin," Wuggetzer says. "We… collect all that data and provide that to the airline."

Providers of in-flight connectivity and entertainment have similar visions, but place more emphasis on revenue-generating technology.

"People are expecting much more… to be able to do in the cabin what they do at home," says Philippe Carette, chief executive of Thales InFlyt Experience.

In addition to providing tailored entertainment recommendations to passengers via IFE, France-based Thales aims to significantly improve onboard digital advertising, it says.

The goal is for IFE systems to finally get "technology that already exists with Facebook or Google – targeted advertising", says Thales head of marketing and product line management Richard Perrot.

"The aircraft will become a true advertising opportunity," says Perrot. "These technologies will now be applied on our in-flight entertainment environment."

California-based Panasonic Avionics is promoting its new NEXT IFE, a multifunction system through which Panasonic aims to offer a range of new services.

NEXT can recommend videos and provide passengers with differing content based on a range of factors, frequent flier status among them, Panasonic says. Passengers' profiles can also follow passengers from aircraft to aircraft.

Airlines can use NEXT to market consumer products, and passengers can buy products through the system, Panasonic says. The company also offers a back-end dashboard that tracks NEXT sales, predicts future sales and suggests pricing changes that would boost revenue, says Panasonic Avionics' head of architecture Samir Lad.

Panasonic also made news at the show by launching Wellness, a suite of health-focused cabin products.

Those include noise cancelling technology that, using microphones and speakers at each seat, reduces ambient cabin noise near the seat, Panasonic says.

Other options include at-seat lighting that adjusts in ways intended to help passengers relax or wake up, depending on the flight phase, and technology that provides passengers with detailed jet-lag recovery plans based on flight details, time zones and other factors, says Panasonic.

Another Wellness option is "nanoe," a system that releases ionised water droplets into cabin air, which results in "removal" of viruses and bacteria and helps eliminate odors, Panasonic says.

The ability of airlines to embrace cabin data rests at least partly on data transfer technology and data transfer costs – the same barriers carriers have faced when attempting to make greater use of aircraft engine and operational data.

Airlines have repeatedly said that data transfer costs have prohibited them from transferring data off aircraft in anything close to real time.

Panasonic is addressing data transfer issues by building a cloud data storage system that enables airlines to upload and download data via wireless connections when the aircraft is at the gate.

The company's cloud is today active in the USA, United Kingdom, Germany, Singapore and Japan, and Panasonic aims to expand the cloud's footprint to a total of 18 countries, says Lad.

Many current satellites used for IFE data transmission orbit up to 35,000km (21,800 miles) from Earth – a distance that results in roughly 1s of latency, or delay in data transfer, says Global Eagle vice-president of satellite network operations Tim Southard.

That latency results in the familiar in-flight frustration of webpages loading "in chunks", he says.

But Global Eagle is working with satellite operator Telsat to launch some 300 LEOs, which will orbit as close as 1,000km, cutting latency to a fraction of second, he says.

"That latency drop is what is going to make… the webpage snap like at your home," Southard says.

Global Eagle needs so many LEOs because, being closer to Earth, they cover less of the globe. But the vast number of LEOs that will circle the planet will provide worldwide coverage, he says.

Though airlines currently store much IFE content in onboard disks, the speed of LEO connections, combined with declining costs, will enable airlines to begin streaming more IFE content and transfer vast amounts of other data, according to Global Eagle.

The company expects to begin selling the new connection in 2022, by which time it expects all 300 satellites to be in space.