The military aircraft simulators market is dominated by five manufacturers, which between them account for more than two thirds of the devices in service worldwide. The clear leaders are CAE and L-3 Link Simulation, each with a 19% share. Boeing and FSI are close behind in third and fourth positions with 11% and 10% respectively, followed by Thales at 8%.

Data recently updated by FlightGlobal shows devices designed for military aircraft simulation now total more than 2,700 units. The USA has 1,500 simulators currently in service – 55% of the world total – with nearly half of these devices operated by the US Air Force.

Lockheed Martin and Boeing aircraft are respectively simulated by 22% and 17% of devices. Nearly 300 devices are designed for Lockheed’s F-16 Fighting Falcon, making it by a large margin the world’s most-simulated military aircraft.

Information provided by FlightGlobal shows a total of 66 military simulation devices were delivered this year between January and October. Recent arrivals include two Sikorsky SH-60 Seahawk helicopter simulators delivered by CAE to the Australian Navy, which currently operates more than 35 of the type and has five simulation devices.

CAE provided a single weapon systems trainer for the Lockheed Martin KC-130 to the US Marine Corps; the USMC also awarded the Canadian company contracts for four fuselage trainers for the tanker. 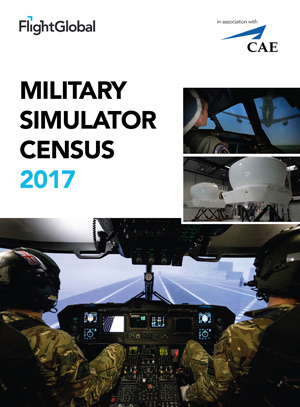 A full-flight simulator for the Airbus Defence & Space C295 tactical transport was delivered by CAE to the 8th Air Base Krakow-Balice for the Polish air force, which operates a fleet of 16 C295s. The C295 device joins a CAE-built PZL SW-4 helicopter simulator, and an additional full flight simulator order was recently placed with CAE; this is due to be delivered in 2019.

In February, the Royal Canadian Air Force awarded CAE a contract for 14 devices tailored to various applications for the C295. The C295W was selected by the government of Canada as its new fixed-wing search and rescue platform in December 2016. As part of this programme, the air force will receive 16 C295W aircraft modified for search and rescue.

L-3 Link Simulation & Training provided 24 new unit training devices for the F-16 and six weapon systems trainers for the General Atomics MQ-1 Predator unmanned system to the USAF in 2017. A total of 38 Predator simulation devices are currently being operated by the USAF – a figure set to almost double by the end of 2018.

A couple of devices designed for the Boeing KC-46A Pegasus tanker have been delivered by FSI to the USAF this year, including a weapon systems trainer and a boom operator trainer. The KC-46A is a military version of the 767 currently in the late stages of flight testing, with first deliveries expected early in 2018. The multirole tanker is intended to replace the oldest aircraft in the USAF’s KC-135 Stratotanker fleet.