When Indian low-cost carrier GoAir needs the CFM56 engines of its Airbus A320 family aircraft overhauled, they are sent to MTU Aero Engines’ facility in Zhuhai, China.

For a country where the commercial aircraft fleet is expected to increase three-fold over the next two decades, having carriers send the bulk of their fleet overseas for MRO services is, as industry watchers and insiders put it, something of a travesty.

“As the third-largest and fastest growing aviation market in the world, having only less than 2% of MRO business globally is an irony,” say Dr S Vasudevan, partner and global sector lead for airports at KPMG. He estimates that only about 10% of India’s commercial aircraft fleet is serviced by Indian MRO companies.

Still, demand for MRO in India is high, and only set to grow: India’s airlines operate some 614 aircraft, and have nearly 700 more aircraft on order, according to Cirium’s Fleets Analyzer. 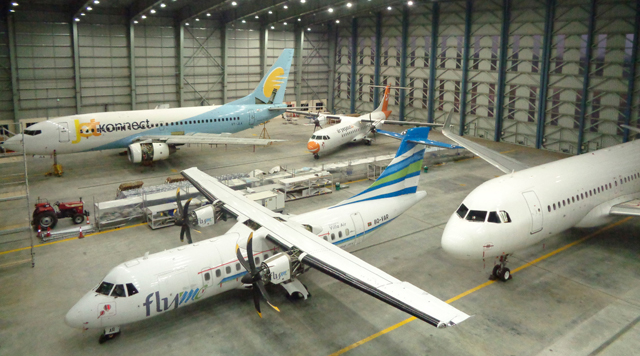 India is home to 99 approved aircraft maintenance companies, of which 12 are capable of undertaking major maintenance of large aircraft, according to the civil aviation ministry. Major players in India’s MRO industry include Air India Engineering Services Limited (AIESL), owned by the Air India group, GMR, as well as Air Works.

By 2040, the MRO industry in the country is projected to contribute $540 million in annual revenue, up from the current $50 million.

On the face of it, India’s growing fleet, low-cost base and educated labour force should make it an MRO superpower. But as is so often the case with India’s aviation sector, things are not that simple.

Industry observers tell FlightGlobal that one major stumbling block is the tax structure. Pulak Sen, founder secretary-general of the MRO Association of India, believes the comparatively steep goods and services tax (GST) is “foremost” among the challenges facing the industry.

MRO providers in India pay a GST rate of around 18%. While this has fallen, it is still higher than India’s nearest MRO competitors, Singapore and Malaysia, which charge 7% GST.

“The Indian airlines, therefore, are forced to avail MRO services out of the country,” Sen says.

Cirium’s Fleets Analyzer shows that most Indian carriers send some, if not all, of its fleet for MRO services out of the country. One exception is Air India, which sends its fleet to its subsidiary, AIESL.

Vasudevan says the MRO industry’s growth has been stunted not only because of the “skewed tax structure”. He also cites “onerous royalties, stifling skill retention challenges, and regulatory inconsistencies” that have let foreign MRO service providers gain a “lion’s share” of Indian carriers’ business.

“Migration of skilled labour to overseas markets is another massive challenge that MRO businesses in India are contending with because of strict regulations on workforce certification and employment norms,” Vasudevan adds.

At this year’s budget speech on 5 July, the Indian government hinted – yet again – at possible policy moves to give the industry a much-needed fillip.

“It is proposed to leverage India’s engineering advantage and potential to achieve self-reliance in this vital aviation segment. Government will adopt suitable policy interventions to create a congenial atmosphere for [the] development of MRO in the country,” Indian finance minister Nirmala Sitharaman said, but did not go into details.

This is not the first time the Indian government has floated the idea of helping the MRO industry.

In a five-year strategic plan released in 2010, the civil aviation ministry said it was targeting the “creation of… world-class MRO in India”. The ministry noted the trend of airlines sending their aircraft overseas for maintenance work and stressed that it would be “highly desirable” for MRO work to be kept within the country.

For the plan to succeed, the civil aviation ministry said planning needed to be done with the global market in mind: “We aim to reverse the trend [of Indian aircraft going to other countries for services].” It also stated that price competitiveness and infrastructure, as well as a skilled workforce, were equally critical to helping the industry.

In a parliamentary answer at the Rajya Sabha in 2017, minister of state in the Indian civil aviation ministry Jayant Sinha said 90% of the Rs 50 billion ($726 million) in MRO costs Indian carriers had to cover that year was spent overseas.

“Given our technology and skill base, the government is keen to develop India as an MRO hub in Asia, attracting business from foreign airlines,” the minister added.

After the 2016 budget, the Indian government also moved to provide relief for the industry by way of duty exemption (on tools and toolkits) and extending the utilisation period for duty-free parts, among other measures.

But obstacles to achieving the goal of capitalising on the growing market and becoming a powerhouse in its own right – like Singapore – still remain, say observers.

Citing the example of the country’s successful Regional Connectivity Scheme – to stimulate regional air links – Sen is hopeful the MRO industry can do likewise, armed with a detailed plan.

“[The] MRO [industry] should also have a master plan for robust development and build an ecosystem to fuel its growth,” he says.

This, he adds, will “possibly open the floodgates for more investment in India, building a robust domestic MRO industry, and more importantly bringing back jobs that we have consistently lost to competition outside, in an uneven playing field”.

Until then, it remains to be seen if discussion can translated to reality – and if the country’s MRO industry will finally be able to take off.