ANALYSIS: Can the industry get more women into the cockpit?

Kanchana Gamage begins presentations to young schoolchildren about careers in aviation by announcing that two pilots will be giving the talk. “When two women walk onto stage in their uniforms, the gasp from the audience is audible,” says the founder of the Aviatrix Project, a campaign to encourage more girls to take up flying. Almost a century after pioneers such as Amy Johnson and Amelia Earhart began confronting the stereotype that only males could be aviators, the gender imbalance in the cockpit is still marked.

In fact, research by the International Society of Women Airline Pilots (ISWAP) indicates women make up only 5% of commercial pilots. With a worldwide shortage of flightcrew – and some airlines having to axe services or curb expansion plans as a result – the fact that not enough women train to be pilots, or remain in the career once trained, has become about more than inequality of opportunity. It is potentially a problem that hits airlines in the pocket.

The reasons for the gender gap are deep-rooted. While sexism is not unique to aviation, airlines have to accept some of the blame. Cockpits and crew-rooms may not be the cauldrons of chauvinism they were in decades past, where condescending male captains made life uncomfortable for female co-pilots. However, some believe employers could do more to encourage women pilots through family-friendly work and training arrangements, such as rotas that fit better into traditional childcare hours, or longer maternity leave. 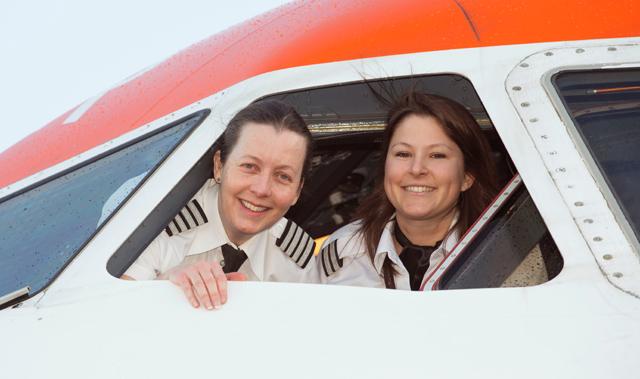 Many, though, believe the problem begins much earlier, with too few young girls encouraged to think of being an airline pilot as a career, whether by parents, peers, or teachers. It is one reason Gamage, a head teacher and amateur pilot, set up the Aviatrix Project in 2015. Working with EasyJet and the British Women Pilots’ Association among others, she recruits female pilots to deliver careers talks. “I wanted to put role models for young girls into schools and break the perception that aviation is not a career choice for them,” she says.

Three years on, the project has expanded from Hertfordshire, where she started, through much of the UK. She and her volunteers have spoken at 400 schools. Girls who show an interest are offered “taster flights” in light aircraft. Seven youngsters have embarked on training courses after being inspired by the talks, she says, and the project is mentoring two teenagers keen to be pilots. “I’ve had a lifelong passion for aviation, and I want to ensure that young women have ample opportunities to achieve their dreams,” says Gamage.

According to ISWAP, outright discrimination is not as much of an obstacle as it was in the past. “Women who started as pilots in the 1970s and 1980s often had a hard time,” says one member, who works for a European airline. She agrees that lack of role models for young girls is one of the biggest problems today, and that working with primary as well as secondary schools is crucial. “Many children decide at quite an early age what they want to do, and, for many girls, a career as a pilot just does not seem that interesting,” she says.

ISWAP’s research into numbers of women pilots at various airlines throws up some surprising findings (see table). In the supposedly more liberal West, the gender balance still tips heavily towards men. Slightly more than 4% of American Airlines pilots are female. At Virgin America, the figure is lower, at just over 3%. British Airways nudges 6%. Meanwhile, in India – where female professionals often have to do battle with a sexist culture – women make up almost a tenth of the pilot workforce at Air India, and just under 14% at IndiGo.

Two airlines whose proportion of women pilots hovers around 5%, yet are taking measures to change this, are EasyJet and Qantas. In August, the UK low-cost carrier launched a campaign to inspire more girls to become airline pilots. A recruitment film reimagines a scene from Hollywood movie Catch Me If You Can, where Leonardo DiCaprio, impersonating a 1960s airline pilot, is pictured with an entourage of air hostesses. In EasyJet’s version, the cast are children aged five to nine, the pilot is a girl and the cabin crew boys.

The airline says that when it researched 500 of its own pilots, more than half of the men knew they wanted the job by the age of 10. For half the women, that point came much later, when they were 16 or older. EasyJet launched its Amy Johnson Initiative in 2015, aiming for 20% of new pilots joining the airline to be women by 2020. That figure has already grown from 6%, when the initiative began, to 13% last year, and reaching 20% will “really start to change the face of the industry”, says the airline.

Qantas’s target is even more ambitious. The Australian flag-carrier’s Nancy Bird Walton initiative – named after the pioneering Australian aviator, and launched in late 2017 – requires 40% of new pilots to be female within 10 years. Speaking in February, at the announcement of Qantas Group’s new pilot training academy to open next year, chief executive Alan Joyce said “addressing the chronic gender imbalance among pilots” would be key to meeting a growing pilot shortage faced by airlines in the Asia-Pacific region in particular.

Referring to estimates of the number of new pilots the industry is likely to require over the next 20 years, Joyce added: “If we’re leaving out almost 50% of the population in our search for the next generation of 640,000 pilots, we’re clearly not tapping into all of the talent that’s available. As an industry we need to do a much better job of encouraging women to become pilots and take up what is an exciting career path.”

In March last year, Air India, one of the few major airlines around the world to have its proportion of female flightcrew in double figures, claimed to be the first to fly around the world with an all-female crew – including cabin, check-in, and ground handling staff – to mark International Women’s Day. The Boeing 777 flew over the Pacific from New Delhi to San Francisco, and then, after a rest period, eastwards again to the Indian capital. The carrier said the achievement had “scripted history”.

There are other signs things are changing. Sharjah-based Alpha Aviation – part-owned by low-cost carrier Air Arabia – says almost one in five of its current cadre of 200 cadets are female, and come from 11 countries, including Canada, Egypt, Germany, India, and South Korea. Each of the academy’s students undergoes its multi-crew pilot’s licence (MPL) syllabus and, upon graduation, receives a 1,500h contract to fly with Air Arabia.

Although the proportion of women on the course varies from year to year, the trend has been up since Alpha began in 2009, says head of cadet recruitment Jeetendra Balwani. Although some students arrive with private flying experience, the nature of the MPL syllabus – with its focus on working in a multi-crew environment from day one – means a background in aviation counts for little, he says. In fact, the majority of recruits have never sat in a cockpit before. This, he believes, lowers some of the traditional cultural barriers for women.

One question the industry may have to confront as it looks to encourage more women into aviation is whether quotas for females might be one way of forcing change. The feeling seems to be that this is not the answer. “From where I sit,” says the female pilot from ISWAP, who does not want to be identified, “it feels like there are definitely more young women coming into the industry. But in the end it still needs to be the right person in the right seat. I don’t think the industry will go that way.”

Today’s female airline captain may have taken her first steps on the career path 15 or 20 years ago when she joined a training academy. It may have been a decade earlier when she first had her dream of becoming a pilot. If the industry is to find the tens or even hundreds of thousands of women pilots it will need by the 2030s, it needs to convince that 10-year-old girl mulling her future in a school assembly this week that flying a commercial jet is not just a job for the boys. 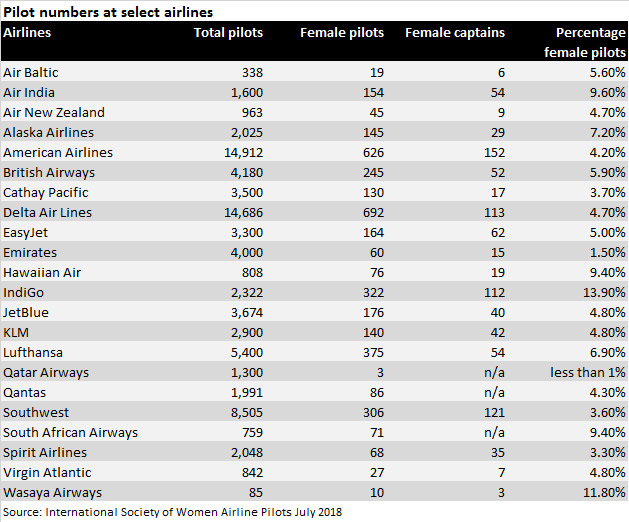