A consortium formed by the propulsion system champions of France, Germany, Spain and the UK to deliver the Western world’s most powerful turboprop ever, EPI has faced multiple and complex challenges, since even before aircraft MSN001 soared over Spain on 11 December 2009. But with a key modification now awaiting approval, could the collaboration between ITP, MTU Aero Engines, Rolls-Royce and Safran Aircraft Engines finally be poised to rise clear of the turbulence experienced during more than a decade of development and operational activities? 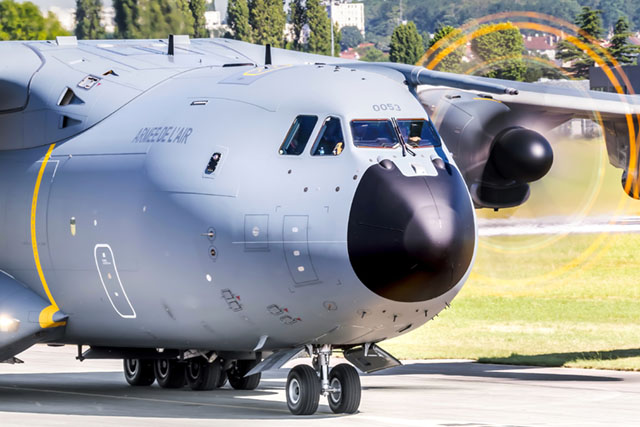 Lead operator France now has 11 of its eventual 50 A400Ms

Partner nations Belgium, France, Germany, Luxembourg, Spain, Turkey and the UK signed a combined development and production-phase contract for the A400M in May 2003 via the OCCAR defence procurement agency. Deliveries of the tactical transport were targeted to begin in October 2009, but eventually commenced in August 2013, when the French air force took the first of a combined 170 aircraft on order for the European operators.

The outcome of a selection decision made by the partner nations, the 11,600shp (8,650kW)-output TP400-D6 was among the factors behind the almost four-year slip in service introduction.

It is more than a decade since the TP400 entered testing, with the design having undergone its first ground run on a test stand in March 2006. Flight trials using a Lockheed Martin C-130K testbed commenced in the UK during December 2008; only one year before first flight aboard the programme’s lead “Grizzly” test aircraft.

Challenges facing the EPI partners and Airbus have included the need to achieve civil type certification of the TP400 by the European Aviation Safety Agency – a milestone achieved in May 2011. Problems ranging from in-flight shutdowns to cracking within the propeller gearbox (PGB) affecting Avio Aero-supplied equipment on some engines due to excessive vibration served to disrupt operations and affect the A400M’s delivery rate.

This remains a clear source of frustration for Airbus Group chief executive Tom Enders. Speaking on the eve of this year’s Paris air show, he referred to his company’s past decision to accept full liability for the A400M’s propulsion system – leaving it open to paying liquidated damages in the event of delivery delays – as “an incredible blunder”.

Despite its ongoing challenges, the A400M has enjoyed some positive headlines recently, including delivery of a 50th production example – to the Luftwaffe on 29 September –and the in-service fleet having passed a combined 100,000h of engine operating time.

With a distinctive, 5.3m (17.4ft)-diameter propeller, the TP400 features a three-shaft architecture, with full authority digital engine control from Safran Electronics and Defense. It can be operated at up to 40,000ft, gives the Atlas a maximum range potential of 4,800nm (8,900km), and total payload capacity of 37t.

“The A400M is steadily becoming the backbone of the European transport fleet,” says Airbus. Deliveries have been made to the air forces of France, Germany, Spain, Turkey and the UK, plus export user Malaysia. Earlier this year, it handed over its first example with much-needed tactical performance, including an initial self-protection suite.

While its tactical functionality continues to evolve, the Atlas is becoming an increasingly relied-upon logistical transport asset. The UK uses the type to transfer equipment to the Royal Air Force’s Akrotiri base in Cyprus, as coalition activities continue over Iraq and Syria. The RAF has also this year deployed the Atlas to countries including Australia, Malaysia and New Zealand, and delivered humanitarian relief supplies to the Caribbean following two devastating hurricanes. The French air force, meanwhile, uses its aircraft to fly logistics missions to locations including in Africa and Latin America. 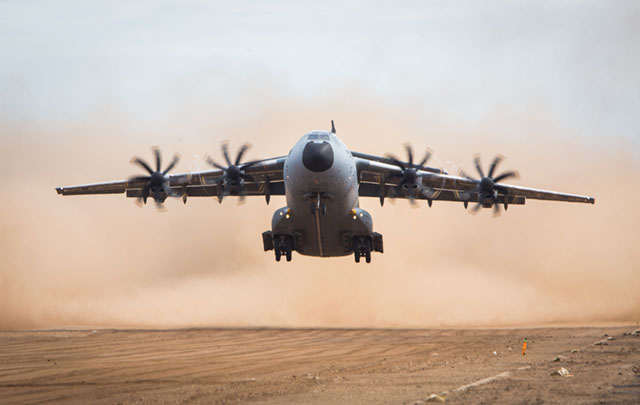 In-service support for the operational TP400 fleet is being provided by EPI partner companies at Orléans, France, Wunstorf, Germany, Zaragoza, Spain, Kayseri, Turkey, RAF Brize Norton in the UK, and at a Royal Malaysian Air Force facility near Kuala Lumpur.

Such on-base maintenance capabilities are backed up by dedicated facilities capable of working on the powerplant in Chatellerault (Safran), Munich (MTU), Madrid (ITP) and Bristol (R-R), and by Safran’s Global Turbine Asia (GTA) joint venture in Subang, Malaysia.

MTU on 10 October announced its receipt of a five-year support deal from the German air force, describing this as an “all-encompassing maintenance concept”. “We are the first certified company to maintain the ­TP400-D6 based on civil maintenance, repair and overhaul procedures,” it notes.

Under the arrangement, Luftwaffe personnel will perform on-wing maintenance and repair work, while MTU will deliver more complex, off-wing support services. “The aim of the maintenance concept is to guarantee the German armed forces receives efficient maintenance services tailored to their operational requirements,” the company says.

Ahead of the March 2017 LIMA air show in Langkawi, Safran announced a new in-service support arrangement with the Royal Malaysian Air Force, which has received its full complement of four A400Ms. The second phase of this deal came into effect on 1 November, with GTA assuming the role of prime contractor. The contract will “ensure that the Royal Malaysian Air Force continues to receive timely support for its engines” via a “successful partnership”, Safran says.

Meanwhile, EPI is working towards a permanent fix for a cracking issue affecting the Avio-supplied PGB on some right-hand gearboxes only, due to the A400M’s use of a so-called “handed” configuration for its TP400s.

A “truncated plug solution” developed as an interim fix was certificated in July 2016 and has since been retrofitted to all in-service aircraft and installed on new engines since the start of this year. EPI says this is providing “strong relief to the operators”, by removing the need to conduct on-wing inspections of the gearbox after every 20 flying hours. “This configuration is performing as expected on the fleet in service,” it adds.

Work to develop a permanent fix through a “Pack 2” series of enhancements had been targeted for certification by EASA during the third quarter, but the consortium confirms that this schedule has been extended.

EPI says it wants to provide “a fully mature PGB configuration, which requires extensive analysis, rig and full engine tests. Consequently, we plan to achieve certification at the beginning of 2018.”

The enhancements mainly consist of modifications to reduce vibration levels, and will “reinforce endurance and reliability”.

For Airbus, the resolution of engine issues and the introduction of contractually promised tactical capabilities can only serve to boost its chances of securing fresh export interest in the A400M.

OCCAR has previously outlined a plan for deliveries of the Atlas to conclude during 2024 under Europe’s 170-aircraft production commitment, but Airbus remains in discussion with its customers about this schedule and easing the pain of financial penalties currently being borne by the company.

Speaking during a third-quarter results briefing in late October, Airbus chief financial officer Harald Wilhelm indicated that output this year would be in line with the number of shipments made in 2016. This adjustment will allow the company to focus on delivering the type to the programme’s core nations, and “gives a bit more time to catch the export orders in the outer years”.