For years, Canada stood largely on the sidelines as the ultra-low-cost airline business model swept with great success across the Americas, Europe and Asia.

The ULCC wave has, for the most part, bypassed Canada, a country dominated by established players Air Canada and WestJet.

But those days are set to end on 20 June, when low-cost carrier WestJet aims to start operations of its new ultra-low-cost subsidiary Swoop.

Although Swoop does not bring a truly new competitor to the market, it will thrust Canada into the ULCC era, upending the status quo by injecting a new business model into the air travel market.

The move could also prove trend-setting, as an Air Canada executive has already raised the possibility that it, too, could enter the ULCC fray.

But still, the long-term impact remains uncertain, especially considering that Swoop will launch with only a handful of aircraft.

“There seems to potentially be some market for ultra-low-cost carriers in Canada, but it’s yet to be determined whether it will be a be a significant percentage of the overall market,” National Bank Financial analyst Cameron Doerksen tells FlightGlobal. “I’m not sure it changes the competitive dynamic that much, as least not initially."

Swoop will initially fly from Hamilton, a city about 80km (50 miles) southwest of Toronto that has been favoured by several ULCC startups. It will operate Boeing 737-800s crammed with 189 seats – 21 more than WestJet-operated 737-800s, according to WestJet and Flight Fleets Analyzer.

Swoop will start with only a few 737-800s, but the fleet will grow to six aircraft by September and to 10 by mid-2019, executives have said.

Former chief executive Gregg Saretsky, who has since been succeeded by Ed Sims, said earlier this year that Swoop could one day operate 30 to 40 737-800s.

Saretsky and others have stressed that Swoop will operate separately from mainline WestJet – having distinct management, different ticket distribution (global distribution systems will not sell Swoop seats) and a less-expensive pay structure for crew members.

Such efficiencies will enable Swoop by 2019 to achieve a cost per available seat mile (CASM), excluding fuel expenses, of six Canadian cents (4.6 cents), WestJet says. Such a figure is about 40% less than WestJet’s 2017 unit cost of 9.89 Canadian cents.

Consequently, says WestJet, Swoop’s fares will be up to 40% less expensive than existing fares. Swoop will charge extra for seat assignments, carry-on and checked luggage, and for other extras.

Low fares will encourage more passengers to travel and will enable Swoop to capture customers who otherwise would drive across the US-Canada border to catch a flight with a US discounter, WestJet says

Aviation observers have long noted the absence of ULCCs in Canada, and some have described the country's air travel market as a duopoly controlled firmly by WestJet and Air Canada.

Canada does have one ULCC, Flair Airlines, which also operates from Hamilton. But Flair flies only a handful of routes, carrying 0.2% of domestic air travellers in 2017, according to schedules data.

Two other Canadian companies – Vancouver-based Jetlines and Calgary-based Enerjet – have been working, so far unsuccessfully, to get ULCCs off the ground

A 2015 report submitted to the Canadian transport minister by former lawmaker David Emerson called Canada “the land that low-cost carriers have forgot”.

That report blamed lack of ULCC competition largely on the Canadian regulatory requirement that a foreign investor can own no more than 25% of a Canadian airline.

“Canada’s small investment market makes it difficult, if not impossible, for small operators to grow, and for new competitors to enter the market," the report said.

That report, and appeals by Enerjet and Jetlines, eventually paid off.

In late 2016 the Canadian government exempted Enerjet and Jetlines from the 25% cap, allowing them to have 49% foreign ownership.

Jetlines immediately announced it signed a partnership with US private equity company Indigo Partners, and it also raised C$6.8 million through an initial offering of stock.

Jetlines had planned to be airborne by June with flights from Hamilton and nearby Kitchener-Waterloo, but has since cancelled those plans.

All along – as Canada eased investment requirements and as Jetlines raised millions – WestJet and Air Canada dismissed threats from ULCC entrants. They even described Canada as fundamentally unfit for the ultra-discount business model.

"The tough thing about the Canadian airline space… is that we have got a geography that is fairly punishing," WestJet chief financial officer Harry Taylor said in September 2016. "We have airport costs and navigation fees that are… the highest at least in North America, if not the world."

“I think it’s a tough road for ultra-low-cost carriers,” he said.

"The Canadian market is different, certainly from the ULCC perspective, than the US [market]," Rousseau said in early 2017. "We certainly don't have the density that the US market has."

As it turns out, WestJet was considering starting its own ULCC even as the company’s CFO all but dismissed the idea publicly.

WestJet announced in April 2017 that it was moving forwards with the idea.

"Over the last five years we have had this on the drawing board," Bob Cummings, then WestJet’s executive vice-president of commercial, told FlightGlobal in April 2017. "We believe we are well positioned to win and own the ultra-low-cost space in Canada."

Like Jetlines and Flair, Swoop sees opportunity from Hamilton.

Starting on 20 June the unit will fly six times weekly from Hamilton to both Abbotsford and Halifax. Then on 25 June Swoop will begin daily Hamilton-Edmonton flights and six-times-weekly Hamilton-Winnipeg flights, according to flight schedules.

In recent days Swoop announced plans to add a fourth aircraft to the fleet this summer, enabling the unit to increase capacity on those routes. 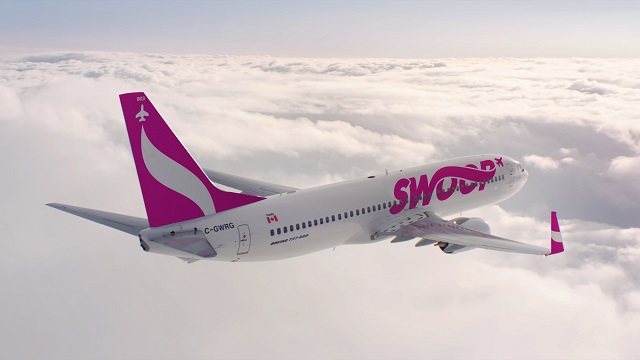 National Bank Financial's Doerksen sees Swoop as a clear response by WestJet to Flair, and as a pre-emptive strike against potential competitors such as Jetlines. Flair already operates some of Swoop's planned routes, and Jetlines has proposed serving some of the same routes.

"This is why WestJet is deploying Swoop," says Doerksen. "They obviously feel there is a threat potentially down the road, especially if these new startups get off the ground."

Swoop's launch has not been without hiccups.

Earlier this year the Airline Pilots Association, International, which represents WestJet’s pilots, filed a complaint against the company with the Canada Industrial Relations Board. ALPA took issue with WestJet’s plan for Swoop’s pilots to temporarily transfer from WestJet.

The board sided with the union, ordering WestJet to change its hiring plan.

WestJet did not reply to questions about how it has responded to the order.

Two days later, WestJet announced that former CEO Saretsky had stepped down and had been replaced by Sims, formerly executive vice-president of commercial.

Some observers saw the CEO shift as a means for WestJet’s board to improve relations with the union.

WestJet’s move has caught the attention of Air Canada, which just five years ago launched its own low-cost subsidiary called Rouge.

Unlike ultra-low-cost Swoop, however, Air Canada designed Rouge simply as a low-cost carrier – a means by which it could compete more effectively against WestJet.

But WestJet has lowered the bar further.

Speaking in January, Air Canada’s Rousseau said Air Canada could, if need be, convert Rouge into a ULCC, though he stressed the company had no such plans as yet.

Air Canada could "launch an ultra-low-cost carrier if we have to", he said.

"We will be watching very closely how this market matures," he added. "We are ready with a very low-cost plane and with a technology backbone to enter the market if we have to."

But Doerksen doubts Air Canada will take the ULCC plunge, noting that Rouge already holds ground against a host of low-cost competitors, including companies such as Air Transat and Sunwing Airlines.