A Cathay press release says that the airline has “made the difficult decision to retire” its 747 passenger aircraft. From a purely nostalgic perspective this could well be true, but it is hard to imagine the carrier’s hard-nosed yield managers being too nostalgic about the type, especially given the efficiency of newer, twin-engined types that now make up the bulk of its fleet.

Still, it is has been a long while since the 747-400 was a pivotal aircraft in Cathay’s fleet. Flight Fleets Analyzer indicates that just three 747-400s remain with the carrier, with an average age of 22 years. 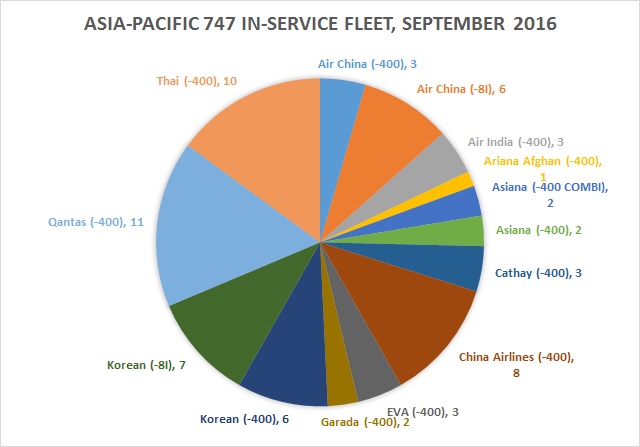 The aircraft registered B-HKT is a 1993-vintage jet. It is powered by Pratt & Whitney PW4000 engines and was originally operated by Singapore Airlines. It arrived in the Cathay fleet in 2007, and is owned by an undisclosed lessor.

All three remaining jets, and especially HUI and HUJ, would have had their share of landings at Kai Tak International Airport, which closed on 5 July 1998.

Fleets Analyzer show that after the retirement of Cathay’s three 747s, 66 passenger 747s will remain in service in the Asia-Pacific. Korean Air is the biggest operator, with 13 examples, of which six are 747-400s and seven are brand new 747-8Is.

FlightGlobal schedules data indicates that outbound ASKS generated by 747s flying outbound Asian airports have been in steady decline for some years, from 300 billion in 2005 to 65 billion for full year 2016. This includes all carriers that operate to Asia. 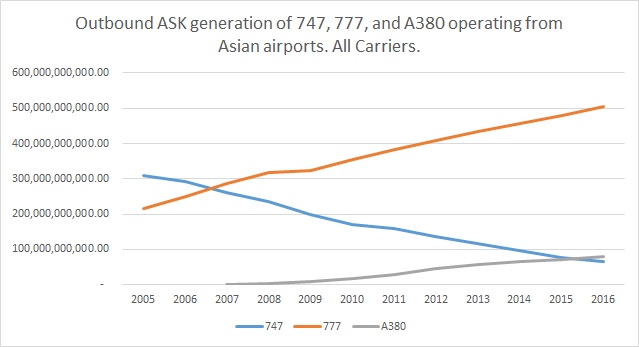 Outbound Asian ASK generation on the part of the 777 family - the de facto replacement of the 747 with many carriers - will rise to 503 billion to 2016. Although the 777 entered service in the mid-1990s, it was only in 2007 that the type produced more ASKs from Asia than its iconic stablemate.

The Airbus A380 had to wait until 2015 before surpassing the 747 in ASKs generated from Asian airports. It is worth noting that a significant portion of the A380 capacity originating in Asia is generated by Middle Eastern carriers, which have beefed up services with the double-decker to the region in recent years.

Nonetheless, in terms of capacity as measure by seats, in 2016 airlines will still generate substantially more 747 seats (1.6 million) from Asia than A380 seats (1.3 million). This is mainly due to the strong regional bias of 747 usage, with Bangkok-Tokyo, Okinawa-Taipei, and Bangkok-Taipei forming Asia-Pacific’s key 747 routes as measured by seat capacity.

New, twin-engined types such as the A350 and 787 are by no means one-to-one replacements to the venerable 747, but route planners relish their lower CASKs, long range, and inherent flexibility.

Never fear, sentimentalists still have a handful of 747-8Is in Asia, and there are also 118 freighter versions in service with the region’s airlines.