L3’s soon-to-open training centre near London Gatwick airport typifies the strategic direction in which the fast-consolidating simulator manufacturing sector is heading. In one building, the US-owned entity will assemble up to 30 devices a year, for its own training business and third-party customers. Meanwhile, a short walk away, a twin facility will train pilots in two halls, each with four full-flight simulators.

L3’s desire to be a major player both in the manufacturing of simulators and pilot training mirrors the vertical integration strategy of rival CAE. The oldest name in simulators announced it was moving into pilot training in 2000, and followed that with a string of acquisitions. Today, the Montreal-based company has a business model that sees it make more from producing trained pilots than it does from producing the actual machines.

While CAE has been manufacturing training devices for 70 years, and in the training services business for almost 20, New York-based L3 is relatively new to the game.

The company – which makes communication, electronic and sensor systems mostly for the defence and homeland security markets – moved into the market in 2012 when it acquired Thales's manufacturing plant near Gatwick: L3 Commercial Training Solutions (L3 CTS) is based in the former Thales facilities until the new centres, close by on Crawley's Manor Royal industrial estate, open later this year.

The acquisition of UK-based training school CTC in 2015, together with Aerosim in Sanford, Florida a year later, and Portuguese academy G Air last October, handed the company its complementary services business.

While equipment still accounts for "north of 50%" of L3 CTS’s turnover, its president Robin Glover-Faure suggests that trends in the market mean the balance could soon be reversed. "More and more, as we grow our training activities, the services part will account for the greater part of the revenue," he says.

At the moment, around 1,600 would-be commercial pilots start their courses at L3 CTS facilities each year, and the company claims that – with an estimated 22,000 entering the profession annually – it has a roughly 7% share of the training market.

"We want to move that up to about 10%," says Glover-Faure. That figure is about half of L3's share of the equipment market, based on current installed devices, but the flight training market is much more fragmented, with dozens of flying schools and airline- and manufacturer-run centres.

The third main player in full-flight simulators for narrowbody and widebody commercial aircraft is Tru Simulation & Training (a fourth, FlightSafety International is mostly focused on general, business and regional aviation types). Like L3 CTS, Tru is a newish brand, created in 2014 when parent company Textron Aviation merged its simulator business with three other manufacturers – Mechtronix, Opinicus and ProFlight – under the Tru banner in a major market consolidation. 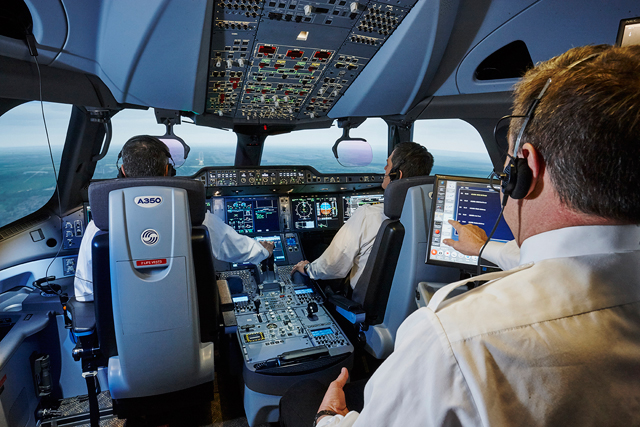 CAE's strategy is to focus on customers, partnering with the airframers when it makes sense

"Since then we have been on a high-growth trajectory," notes George Karam, Textron’s vice president air transport simulation. Two of its most significant recent deals have been with Boeing, which awarded Tru the contract to develop the first full-flight simulators for both the 737 Max and the 777X.

Although Tru's emergence as a competitor to L3 and CAE has created, says Karam, a "genuinely three-legged industry with a trio of strong players", replacing an effective duopoly, the Textron subsidiary's strategy markedly differs from that of the other two.

While Textron provides "turnkey solution" training to customers of its own Bell and Cessna general aviation brands, Tru focuses solely on simulator manufacturing. "We have taken the decision not to supply training services in the airline market," he says. "We believe that the aircraft OEMs, together with the airline operators, are the ones best suited to define and provide pilot training in the commercial world. They have the best knowledge to address what the training requirements should be."

The seeming growing recognition in recent years by Airbus and Boeing that the markets for providing training together with maintenance, repair and overhaul promise higher margins than shifting metal has led to both big manufacturers boosting their services businesses.

Toulouse and Seattle have invested heavily in their own training centres. This has potentially created a conflict for CAE and L3, who work with Airbus and Boeing to design and certificate simulators and sell them to their in-house training operations, but find themselves in many instances competing with these same manufacturer-owned businesses when it comes to training pilots.

For Glover-Faure, however, the OEMs have always had a direct interest in training because of the need for them to oversee the type rating process. However, he says the airframers will "wrestle" with trying to provide the capacity and range of services the industry needs. "The manufacturers don't have the capabilities we can offer from ab initio through to recurrent training," he says. "Full respect to them, but that's the dilemma in their model. We are aircraft agnostic. They are by their nature skewed towards training one make or the other. Our proposition is solution-focused from selecting ab initio pilots to looking after all the ongoing training needs of an airline. We integrate all our expertise into what we offer to the customer."

CAE chief executive Marc Parent agrees that the OEMs have consistently had their eye on the rewards the aftermarket offers and that their recent emphasis on boosting their services businesses is "not really any kind of new competition for us".

In terms of device manufacturing, CAE's long heritage and market share of around 70% for FFS gives the Canadian company a dominant position, and in training it will continue to concentrate on the customer, partnering with the aircraft manufacturers where it makes sense, Parent maintains. "We focus on being the best at what we do," he says. "They’ll play their game and we'll play ours and when necessary we'll get win-wins."

While for Glover-Faure, the technological breadth of his parent company is a strength, Parent notes that "CAE is the only pure play in the market," with its $2.8 billion annual revenues coming only from the manufacture of training devices and delivery of training in aerospace, defence and healthcare.

As with L3, Parent sees the services segment as offering bigger growth potential than making simulators. The market for equipment is largely in step with the size and shape of the airliner fleet. As more aircraft are delivered, more simulators are required to train pilots to fly them. However, with CAE's production locked into aircraft delivery schedules, there is unlikely to be any sudden surge in demand in what Parent describes as a "slow growth market".

The appetite for new pilots, on the other hand, seems almost insatiable, and that directly feeds into demand for places in training schools. "We are seeing double-digit growth in this market," says Parent. "The world is going to need a lot of pilots and we foresee a very hot market for flightcrews for the next decade at least."

At the 2017 Paris air show, CAE released its first Airline Pilot Demand Outlook that – in line with forecasts from Airbus and Boeing – predicted a global requirement for 255,000 new airline pilots over the next 10 years – the equivalent of 70 a day. The report also estimated a need to develop 180,000 first officers into airline captains (a sometimes overlooked element of the current pilot shortage is a lack of experienced potential commanders as well as raw recruits to the right-hand seat).

For Karam, the trump card of Tru – the only one of the three simulator manufacturers without a training arm – is its relationship with the manufacturers. Its deal with Boeing to develop the first 737 Max simulator and supply devices over 10 years – announced at the Farnborough air show four years ago – was followed by a "multi-year" agreement in April 2016 to produce simulators for the 777-9. The first Max device was delivered to the airframer's Miami training campus at the end of 2016 and went into service early last year. The two suites for Boeing's latest widebody will be installed at Boeing's centres in Singapore and the UK, and are expected to be operational in the second half of next year. 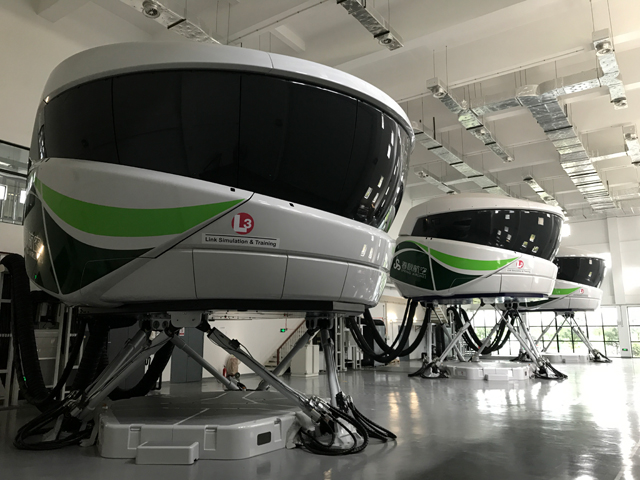 The Textron subsidiary also signed in October its first major deal with Airbus to supply A320 simulators to the airframer's training centre in Singapore, and to Hua-Ou Aviation Training Company in Beijing. While the relationship is not the same as with Boeing, Karam says its recognition as an approved supplier to Airbus is highly significant.

While the Boeing deals do not, of course, give it exclusivity on the programmes – its competitors are able to access the software to build 777-9 or 737 Max devices – Tru does get "closer access to the programme and the ability to link the development of the simulator to the development of the aircraft", says Karam. "It means we can fine-tune as we go. The acceptance of the simulator is conducted by the OEM."

Back at Gatwick, the building work is almost finished on L3's new training centre and manufacturing plant after a nine-figure investment. The area is the UK's home of aviation training: Boeing Flight Services and CAE are also on the Manor Royal estate, but L3 wants its location and architecture to make a major statement about its ambitions in the market.

Drivers and passers-by will be able to see simulators in action through large windows down the side of the training centre. One of the construction managers jokingly refers to the facility as "the greenhouse". The eight devices will include at least one A320 and A330, and a 737. "We’ll keep our powder dry for now on naming the others," says Glover-Faure.

The advantage of the L3 approach, says Glover-Faure, is flexibility. As with CAE, the equipment market gives it a predictable revenue flow, based largely on delivery schedules of aircraft. However, in common with its main competitor, it can be nimble in how it addresses the training market. Through the former CTC – which also has a school in Hamilton, New Zealand – it processes a steady stream of would-be pilots willing to pay for their own training, or occasionally have it funded by an airline sponsor.

The only real risk to L3 is to its reputation, if too many of these graduates turn out to be below par, something Glover-Faure says rigorous vetting makes unlikely. On the airline training side, the growth in worldwide fleets, with the arrival of new types, and the shortage of captains, means there is a long queue for sessions at its simulator training centres.

L3’s offer to airlines can also be adjusted to suit the way they want to train their flightcrew too. Just as its simulator assets can be bought outright, dry-leased or wet-leased, training can be delivered in various ways.

"Our model is increasingly based on a partnership with the airline," says Glover-Faure. "Some carriers want to outsource virtually everything. Others want us to carry out, say, upgrade training, with the airline itself doing the final checks, outsourcing anything from 10% to 50% and managing their costs by smoothing the peaks in demand [for simulator hours]."

With its sales teams approaching airlines with a portfolio ranging from the simulators themselves to ready-made first officers and devolved and ad hoc pilot instruction, L3 has, says Glover-Faure, a "smorgasbord of products and services that we can bundle to be very competitive".