Although its Falcon business jet unit is enduring something of an orders slump, Dassault Aviation’s defence arm is enjoying a bumper time with its Rafale multirole fighter, with production already assured through at least the middle of the next decade.

Recent boosts to the programme include a French commitment to launch an F4 operating standard of the jet; confirmation of a long-planned Indian order; and numerous other prospects to add to its list of export buyers.

Announced earlier this year under a deal with France's DGA defence procurement agency, the Rafale's F4 evolution will build on its so-called "omnirole" capabilities.

“The launch of the F4 standard is essential to bring to our armed forces, by 2025, a system with increased performance as a response to the reality of ever-more-demanding commitments,” said defence minister Jean-Yves Le Drian as first details of the deal emerged in March.

The Rafale's next production standard will go beyond the updates being introduced with the French military's current F3 configuration. A new F3R standard, which will introduce capabilities including MBDA's Meteor beyond-visual-range air-to-air missile, is due to achieve operational readiness in mid-2018.

With Paris having so far ordered a combined 180 Rafales for its air force and navy, against a long-stated requirement for 225, the F4 enhancement also holds the potential of a further commitment – which according to Dassault chief executive Éric Trappier could perhaps be for as many as 100 additional examples. 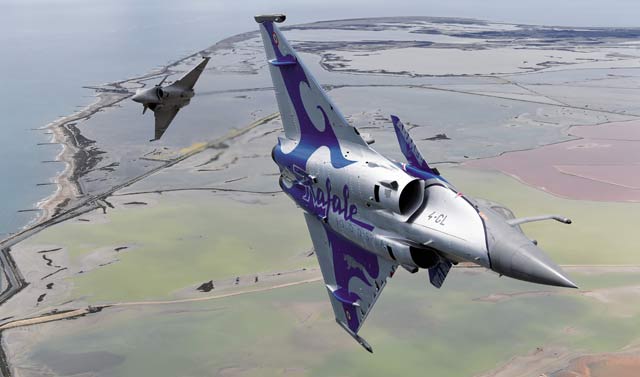 “I am delighted that the defence ministry underlines the need to continue with acquisition of the Rafale beyond the fourth tranche currently in production, in order primarily to meet the needs of the French air force,” he said earlier this year.

Dassault expects this possible fifth-tranche order to become defined as Paris releases its next six-year procurement plan in 2019. It firmly believes that more will be required as the air force retires increasing numbers of older Dassault Mirage 2000-series fighters and strike aircraft, and in order to guarantee a national combat aircraft fleet of at least 225 jets.

Equally importantly, Trappier believes the F4 standard will act as a “launch pad” for further export sales of the Rafale.

After a long wait to secure its first international customer for the type, Dassault now has three such buyers: Egypt, India and Qatar, which between them will acquire 84 examples. Of these, Egypt is the only one to have received the aircraft so far. Flight Fleets Analyzer records the nation's air force as now having nine examples: six B-model trainers and a trio of single-seat Rafale Cs. Another five will follow this year, from a 24-strong order. Qatar will be the next to receive the type, in 2018, also having signed for 24.

Dassault's most recent export success came last September, as India signed a 36-aircraft deal. Valued at €7.75 billion ($8.7 billion), also including associated packages of air-launched weapons and in-service support, this covers the production of aircraft at its Merignac facility in the south of France. A vastly more ambitious Indian medium multi-role combat aircraft (MMRCA) deal, which had sought up to 126 fighters and associated transfer of technology and production capability, foundered on cost grounds before New Delhi and Paris finally sealed the more modest Rafale purchase.

While the Indian deal for now covers 36 aircraft to be delivered in a "fly-away" condition from 2019, Dassault has firm ambitions to sell more of the type to its long-term customer.

Welcoming confirmation of the initial order, it described it as part of a wider goal of establishing itself in the nation "with a view to developing wide-ranging co-operation under the ‘Make in India’ policy”. Trappier notes that, while establishing industrial partnerships in India would be “challenging work", the company is "very confident, and full of motivation to go ahead”.

The path to success in India was a long one – the deal was signed four years after its selection at the end of a protracted contest, but it was also a great campaign victory for Dassault, which defeated rival MMRCA bids with the Boeing F/A-18E/F Super Hornet, Eurofighter Typhoon, Lockheed Martin F-16, RAC MiG-35 and Saab Gripen. 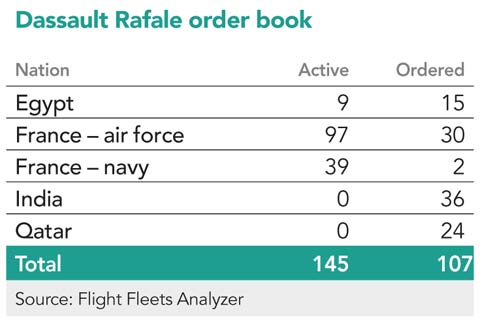 Trappier believes the Indian air force's current order is "just the start", and also sees a potential opportunity for the Rafale M to meet the Indian navy's need for a new-generation carrier-based strike asset; estimated as for 57 aircraft. “It is the only aircraft [among its competitors] capable of being deployed on an aircraft carrier,” he notes.

Several further export prospects are currently being pursued, including in Belgium, Canada, Finland, Malaysia and Switzerland.

Trappier is particularly outspoken about the Swiss air force's need to replace its F/A-18C/Ds and Northrop F-5s, after the Rafale was defeated in a contest with the Gripen NG earlier this decade; only for a planned 22-aircraft purchase to founder following a referendum defeat.

"After trying to buy a smaller aircraft [the Saab Gripen] they will buy the top of the range, which is the Rafale,” Trappier says. “I don’t see that the Swiss will return to the Gripen – the people voted against it, so it would be difficult for a defence minister to go back.”

The company's annual production rate is an area of interest though. According to a financial update issued by the company on 5 January, nine new-build Rafales were delivered in 2016, along with two French navy Rafale Ms returned to use following upgrade to the F3 standard.

Dassault's apparently rigid production capacity has been seized on by its opponents as it enters export campaigns, and especially as it must now juggle orders for five customer services.

With France having an established fleet and small backlog – 32 aircraft as of the end of 2016 – its solution has been to slow deliveries to its home nation to a trickle. According to a production plan detailed by the company earlier this year, the French air force will receive just one aircraft this year, followed by three in 2018. It will then take a two-year break in deliveries, before accepting its next examples in 2021.

But it is clear that given the prospect of a substantial new export order, Dassault – which had a total Rafale backlog of 110 aircraft as of 31 December 2016 – could increase its existing build rate and look to establish partnerships with foreign companies.

Speaking to FlightGlobal at the EBACE business aviation show in Geneva last month, Trappier said Dassault also will discuss a new production rate for its French customers' aircraft, and that he feels “confident in production levels over the next decade”.

As the company strives to secure new international buyers and convert users of its earlier Mirage-series fighters to the Rafale, its competitive footing in the fighter business looks very solid for many more years to come.