ANALYSIS: Don't count on technology to save us

Emissions targets for aviation will get "tighter, not looser", and reducing passenger demand "has got to be a possibility", according to a senior member of the UK government's Committee on Climate Change (CCC). However, the committee will include the possible implications of electrifying the air transport sector in its upcoming advisory report to the government, amid rising optimism that battery-powered commercial aircraft for short-haul flights could be on the horizon.

Adrian Gault, chief economist at the CCC, told delegates attending the Royal Aeronautical Society's Greener By Design conference in London in November that aviation has found itself "in a rather privileged position in our work" up until now. But he warns that the committee "will need to look again at aviation" ahead of providing advice to the government in March on the implications of the Paris Agreement for the UK's 2050 emissions reduction targets.

The government asked the CCC in 2018 to advise it on setting the UK's long-term emissions targets. Committee chairman Lord Deben said at the time that it would look at whether the current 2050 target – which requires an 80% reduction in emissions by 2050, compared to levels in 1990 – is still "fit for purpose". The committee will also "set out the necessary steps to clean up the UK's homes, industry, transport and agriculture to help drive down emissions further, as well the associated costs and benefits". 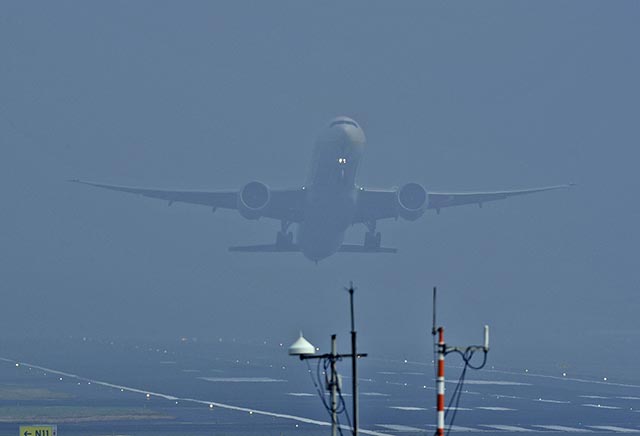 "Our overall message in terms of the tightness of targets is that we can only envision them getting tighter in light of Paris, not looser," says Gault. "Any emissions left from difficult-to-reduce sectors [including aviation] will have to be offset by greenhouse gas removal, carbon capture and storage, and reforestation."

Whereas 10 years ago the power sector was the biggest source of emissions in the UK, "this is no longer the case", says Gault. "Transport is now the biggest single sector and aviation within that is about 4%. But when you look at 2050, it's becoming a very substantial share," he notes, adding that finding ways to reduce air passenger demand "has got to be a possibility".

The CCC "will have electrification in our scenarios" for aviation for the first time when it issues its upcoming report. However, Gault points out that the committee "doesn't like to make assumptions that there will be huge shifts in technology". Therefore, any estimates on the extent to which all-electric and hybrid aircraft could help to reduce the sector's carbon footprint will likely err on the side of caution.

"We're not [here] to make bold assumptions that technology is going to come to the rescue," says Gault.

Optimism is rising in other quarters, however, about the speed of progress in the electrification of commercial aircraft. Robert Thomson, managing partner at consultancy Roland Berger, points to a "huge swathe" of new electric and hybrid aircraft programmes – "80 new programmes in the last two years" – which form part of what he describes as an "electrical propulsion revolution".

Two-thirds of these programmes are "down the bottom end of size" and are all-electric-powered, says Thomson, and "only when we move to large aircraft does hybrid-electric come into its own".

"Transition to electric propulsion is required if aviation at a global level is to remain close to today's carbon dioxide emission [levels]," says Thomson.

According to data cited by Roland Berger, the aviation industry's share of global carbon dioxide emissions by 2050 could be as much as 24% if there are no electric or hybrid aircraft and if fuel efficiency improves by 1% per year.

In the best-case scenario, if there were to be a regulatory-driven transition to electrical propulsion, under which all aircraft had to retire once they reach 10 years old and be replaced by electric or hybrid aircraft from 2030, this share could drop to between 3% and 6%. However, it would also result in a "bloodbath" for leasing companies, which rely on the residual value of aircraft.

"This scenario would require a rapid transition to hybrid and electric aircraft, adding up to 70% of the global fleet by 2050," says Thomson.

While this might seem overly optimistic, he points to "significant progress" towards breaking down barriers to electrical propulsion on the technology, policy and market demand side.

For instance, EasyJet – which is working with US-based start-up Wright Electric to develop an all-electric commercial passenger jet capable of operating short-haul flights within a decade – is "seeing pressure from passengers, particularly younger people, for more environmentally friendly forms of aviation", says Thomson.

EasyJet's ambition to operate such an aircraft "is going to require enormous amounts of work", admits Wright Electric chief executive Jeffrey Engler. "I don't think it's impossible, but it's going to require lots of support," he says.

"We've been encouraged by higher-density batteries, but we're looking internally at all-electric and hybrid. If the first small step is hybrid-electric, we're okay with that," says Engler. "We're starting small and building up on a stepping-stone basis." Wright Electric aims to fly the first version of its nine-seat hybrid-electric aircraft in 2019.

John Fox, business development director at Thurso, Scotland-based battery cell manufacturer AMTE Power, agrees that a lot needs to happen before all-electric aircraft with the size and range to operate a network such as EasyJet's take to the skies.

"We're seeing advancements in batteries but they're slower than in other fields," he says. "I think there will be pure electric [commercial aircraft], but there's going to be hybrid-electric as we travel through."

It is not only a question of developing the battery technology to make electric air travel feasible. Demand for battery cells is increasing in all sectors and aviation will have to compete with other industries, as Fox explains: "The issue facing the aeronautical industry is going to be supply. There's a limited supply and that's being gobbled up by the EV [electric vehicle] industry. Product development is being driven by the standard cells everyone uses, so the same thing that powers your laptop could be the same thing that powers aircraft.

"You are, by volume, a niche player and you might not get the attention of manufacturers," adds Fox, noting that demand is outstripping supply and that by 2020 the market for batteries will be demand-led.

While battery technology is advancing, these advances are "slower than in other fields", due to the tendency of battery cells "to go wrong and catch fire", says Fox. Some of the well-known drawbacks of lithium-ion batteries are that they are fragile in nature, their capacity deteriorates with age and they "have the potential to become unstable at high temperatures", says Fox. Sodium-ion batteries are now "being examined as a potential alternative".

Despite the challenges that lie ahead, a survey carried out by Roland Berger found that aerospace and defence professionals "broadly agree that hybrid-electric aircraft could enter commercial service by the early 2030s" on short-haul routes such as London to Paris, says Thomson.

However, the expected service-entry date for all-electric aircraft is "less clear", with many of those surveyed not expecting to see them in operation until 2045 and beyond.