Wedged on a small plateau in Sao Jose dos Campos between the state-run Institute of Aeronautical Technology (ITA) and Brigadier Faria Lima Avenue, Embraer’s oldest manufacturing complex has adapted over nearly five decades to support the development and production of a diverse crop of aircraft, ranging from regional turboprops to small business jets to large regional jets.

Starting this month, Embraer’s Faria Lima factory complex, about 90km (56 miles) northeast of São Paulo, must adapt yet again, as the assembly line begins to absorb the task of assembling the re-winged, re-engined and heavily updated E190-E2 aircraft.

Two years ago, Embraer workers started assembling the flight test vehicles for the E190-E2 in a separate hangar, allowing final assembly of the original E-Jet series to continue undisturbed. With the E190-E2 on track to enter service before July next year, Embraer must now integrate the re-engined 90-seater into the mainstream production system.

To make the transition slightly more interesting, Embraer has chosen not to build any new facilities, with the Faria Lima complex to accommodate the E190-E2. The new series of aircraft will be assembled on the same production lines that are concurrently building the original E-Jet series.

By the end of next year, the same production system must be capable of building five different models from two very different families of aircraft, including the original E175, E190 and E195, as well as the E190-E2 and the E195-E2. By 2021, Embraer plans also to introduce the E175-E2 into final assembly, but by then deliveries of the original E-Jet family should have slowed to a trickle. 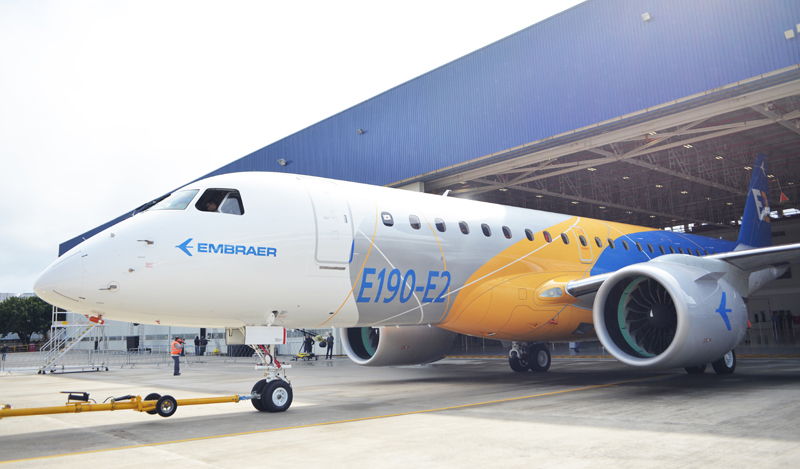 The re-engined, re-winged E190-E2 is on schedule to enter service before July 2018

Through the transition, Embraer expects to keep delivering aircraft at roughly the same level as it does today – about eight aircraft rolling off the Faria Lima assembly lines per month.

Arranging this intricate industrial choreography will be a cadre of well-experienced production managers. In the past 15 years, Embraer has introduced the original E-Jet series, Phenom executive jets, Legacy executive jets and the KC-390.

“Because Embraer has been doing so many new clean-sheet design models in last few years, we can drive and change the tyres of the car at the same time,” says one Embraer production manager. “It’s very bold what we are doing and we couldn’t do that unless we had done so many clean-sheet models.”

Over a period of more than two years, Embraer will phase in a hybrid production system, which, when fully implemented, will allow the company to build any particular model in any sequence. So an E190-E2 could be loaded into one position on the final assembly line, followed by an original E175-E1 and trailed by an E195-E2, despite vast differences between the work processes for each major type.

Embraer officials are well aware of the challenges of attempting such a model. In one infamous example, Boeing tried to implement such a system with the introduction of the 747-8 and phase out of the 747-400, but complications during the transition contributed to the former programme’s multi-year delays. Since that experience, Boeing has been careful to phase in hybrid production systems gradually. A third line was created to assemble the 737 Max exclusively for more than a year, as the 737NG series continued to be produced on the two existing assembly lines.

To develop a transition plan, Embraer looked outside the aerospace industry. Carmakers frequently use hybrid assembly lines to build multiple models in sequence at production rates that would stagger the busiest aircraft builder. So Embraer production managers studied the automotive industry for successful techniques and devised a three-phase transition process to a fully hybrid production system for up six different versions of the E-Jet.

There are unit and schedule goals for all three phases, but Embraer will implement the next phase only when the system is ready. So the plan calls for the first four production E190-E2 aircraft to be assembled in Phase 1, but the actual number could increase if managers believe the system is not ready to move to the next phase. Phase 2 notionally calls for assembling the next 25 E-Jet E2 aircraft, but that number also could grow. By late 2019 or 2020, Embraer plans to have a fully hybrid system functioning under Phase 3. The immediate goal under Phase 1 is to begin the transition without causing any disruptions to existing production.

“We have three phases with gates. We will only be moving to the next phase… if we meet those targets, then we will begin to work in the next phase,” says Luis Carlos Affonso, chief operating officer for Embraer Commercial Aircraft.

Within the Faria Lima complex, Embraer has four buildings currently devoted to E-Jet production. It begins inside the two hangar bays of the F-60 building immediately adjacent to the runway. In one bay, workers build up the forward and centre fuselage of the original E-Jet. The two sections – along with the rear fuselage, which is shipped to Faria Lima by Spain’s Aernnova – come together in the other bay of F-60, where workers complete the fuselage build-up and install some minor systems, such as wire harnesses, air ducts and hydraulic lines. 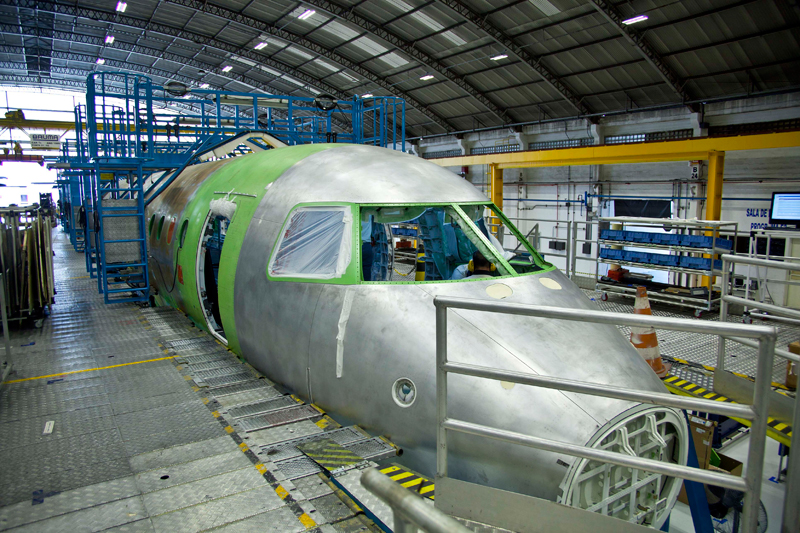 Once fully operational, the assembly line will be able to build five models from two families

After the aircraft emerges from the paint bay in the F-210 building, the next structural step in the existing production system moves to the F-107 building, away from the runway on the other side of F-60, where Embraer’s workers mate the wing to the fuselage. From there, the structurally complete E-Jet moves to the final assembly hangar in the F-220 building, where workers complete the aircraft by installing the rest of the systems and the engines.

To adapt to the hybrid production system, Embraer will switch key buildings in the process, with the goal of moving tasks associated with final assembly line to buildings closer to the runway and tasks linked to structural assembly further removed from the runway. That means the structural assembly tasks now performed in the F-60 building will transfer to the F-107 building, and vice versa.

Expecting to encounter unexpected complications, Embraer is being careful to segregate initially final assembly work for the E190-E2 and the original E-Jets. For example, the F-220 final assembly hangar has six positions, including one position reserved for spill-over tasks. The first group of E190-E2s will occupy a single position in the F-220 hangar, rather than pulse down the horseshoe-shaped assembly line. That stationary production station mitigates risk; if any particular task takes longer than planned, a moving assembly line would come to a stop.

Meanwhile, Embraer has already converted the tooling jigs in F-220 to hybrid rigs. The equipment can be used to manage all final assembly tasks, whether the aircraft has the extended wingspan of the E190-E2 or the structure of the original E-Jet.