Ever since the UK government announced in October 2016 that it supports London Heathrow’s proposal to build a third runway, those opposed to the expansion on noise grounds have been voicing concerns over the airport’s apparent failure to specify where the new flight paths will be, and where the most noise pollution will occur.

London Heathrow has insisted that it will “meet and, in most cases exceed” the conditions set by the Airports Commission on noise. These include a 6.5h ban on scheduled night flights between the hours of 23:30 and 06:00, more reliably maintained predictable respite periods, and the creation of a legally-binding noise authority.

Heathrow said in May that it would support an earlier introduction of an extended night-flight ban “as soon as the necessary airspace has been modernised, after planning consent for the third runway has been secured”. The ban would come into effect by 2021, by which time the airport aims to have increased the number of flights on its existing runways by 25,000 a year.

However, Heathrow wants to change the times recommended by the Airports Commission to between 23:00 and 05:30, to take account of early morning arrivals from long-haul destinations.

It is unclear whether the proposed 2021 night-flight ban would remain in place in the event that a third runway is built. This is by no means a certainty, as it has yet to be approved by the UK Parliament. Heathrow now says it is “important to differentiate between 2021 and third runway options”, noting that “any post-third runway ban would have to be consulted on anyway”. 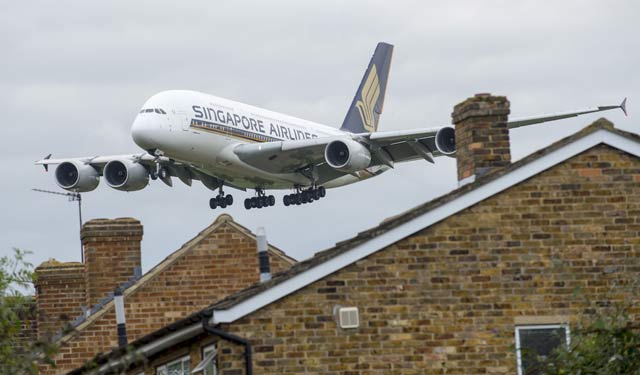 Anti-noise campaigners are not satisfied with the 23:00-05.30 scheduled night-flight ban suggested by the airport, arguing that this does not provide enough respite for local residents.

“All the advice on noise defines night noise as an 8h period, and 11 to seven is the recognised [timeframe]. Communities would like to have a point at which movements start after 6am,” says Tim Johnson, director of the UK-based Aviation Environment Federation (AEF), a non-governmental organisation that campaigns exclusively on the environmental effects of aviation.

“It looks like a big giveaway but, in practice, it is not as big a respite from noise as communities had hoped for.”

The biggest issue for Johnson is the fact that Heathrow has not yet divulged where the new flight paths would be if a third runway were to open. He says this creates uncertainty for residents who live far enough away from the airport to avoid the effects of noise pollution now, but who may become affected in the future.

“TFL [Transport for London] has concluded that hundreds of thousands of people could be newly-affected by noise,” says Johnson. “These issues haven’t featured in the government’s announcement – how to deal with people who are unaware of how they will be affected by noise. The airport and the government have been quite silent on that.”

This could be a “real problem”, adds Johnson, given “the reactions you get [from residents] when new flight paths are introduced”.

Responding to such criticism, Heathrow points out that flight paths are determined and published by the UK Civil Aviation Authority via a process that is “entirely out of the airport’s hands”. It is “not the airport’s responsibility to define airspace in that way”, it adds.

On the issue of making respite periods more predictable for local residents, Heathrow said last May that it would publish a timetable for different areas under the flight path, so that people would know when no aircraft would be flying over their homes. It promised to ensure that there would be “some respite” for everyone living under the final flight path, which would be achieved by “using advances in navigational technology”.

But the airport tells FlightGlobal that the frequency and duration of respite periods “would be subject to consultation with local residents, as the flight paths have not been designed”.

Communities living around Heathrow are already provided with predictable respite periods by the airport’s runway alternation programme, under which one runway is used for landings and the other for take-offs until 15:00, when they are swapped over. But while these residents currently have an 8h respite from the loudest aircraft noise during the working day, Johnson says “it really isn’t clear” how far out respite periods would stretch after a third runway is operation.

“How do you provide respite to people further out? If you’re [west of the airport] in Ascot or Twickenham and aircraft are turning south – are there going to be operations all day, no matter which runway is used?” he asks. There are also concerns that today’s 8h respite period could be halved to just 4h in the future.

Heathrow says it has asked the government to create a legally-binding independent noise authority, “so we can be held to account” on aircraft noise – adding that “we’re working through the detail of this now, so can’t say anything specific at the moment”. The airport declined requests to speak to FlightGlobal specifically about noise issues prior to the publication of this article, but highlights the economic benefits of expanding the airport.

AEF’s Johnson expects the government to consult on the noise authority in January, but he does not have high hopes for its level of influence. “It’s not going to be like the French model, with the power to fine airports. It will have more of an advisory role,” he predicts.

Those opposed to expansion at Heathrow argue that due to the airport’s proximity to large numbers of residents, noise already affects more people than is the case at any other European airport. Concerns centre around health, with anti-noise campaigners pointing to studies that have detailed the effects of aircraft noise on the human body.

One such study, HYENA (Hypertension and Exposure to Noise Near Airports), examined the impact on blood pressure of 4,861 people aged 47-70 years who had lived for more than five years near one of seven major European airports, including Heathrow. It found that a 10dB increase in night-time aircraft noise was associated with a 34% increase in the use of high blood pressure medication in the UK.

Johnson also points to links that have been found between aircraft noise and long-term mental health issues. A study carried out at Frankfurt airport, for example, showed that a 10Db increase in aircraft noise increased the risk of depression by 9%.

The Noise-Related Annoyance, Cognition and Health (NORAH) study, carried out by nine research and technology institutions on behalf of Germany’s UNH, concluded in late 2015 that out of three traffic noise sources – aviation, road and rail – aviation had the highest effect on depression. However, scientists were unable to verify an increase in blood pressure related to constant aviation noise.

“Overall, the health risks from aviation noise identified by NORAH are lower than assumed up to now,” says the report. But the study also found that annoyance due to aviation noise had increased in comparison with the results of earlier studies.

“Annoyance itself is regarded as a health impact because it gives rise to stress-related illnesses and can lead to cardiovascular disease,” says Johnson.

When Heathrow does eventually publish its planned flight paths for after the third runway is built, Johnson believes a swathe of as-yet unaffected people will be vocal in their opposition to the noise pollution they could find themselves facing. “Newly-affected residents are not yet fully aware of what might happen, and they will be very vociferous,” he says.