Group Captain Samrath Dhankhar of the Indian air force has earned a place in aviation history, as the commanding officer of its 45 Sqn (“The Flying Daggers”): the first to operate the Hindustan Aeronautics Tejas Mk1 fighter.

In another historical footnote, he and a fellow pilot brought two examples of the combat aircraft to the Langkawi International Maritime and Aerospace (LIMA) exhibition in Malaysia. This was the first deployment of the indigenous-developed type to Southeast Asia, and also the first time that an air force pilot had flown the type at a foreign air show.

Ostensibly the visit was made in support of Kuala Lumpur’s nascent requirement for a light combat aircraft. Yet it also underlined India’s increased confidence to show off the locally-made fighter to the world.

“We’re here to promote, but not to compete,” Dhankhar told FlightGlobal during the show. “The competition will be for the OEM to handle.”

The two jets’ journey to Langkawi from an air base near the city of Coimbatore took them northwards along the subcontinent’s east coast to another base near Kolkata. Although the optimum altitude for this transit was 33,000ft, the two-ship formation flew at 27,500ft, because separation rules at this altitude are more relaxed.

After that stop, the pair flew to Yangon in Myanmar and then onwards to Langkawi. A support aircraft flew ahead of the formation to provide logistical support and to greet the fighters on their arrival. At the show, the team found itself operating from a small tent next to the flightline. This was a big change from February’s Aero India event near Bengaluru, where the same team operated from the sprawling Yelahanka air base.

Prior to operating the Tejas, Dhankhar spent most of his career in the cockpit of the Mikoyan MiG-21 "Bison"; a heavily upgraded version of the Cold War stalwart and still a major asset in the Indian air force. He has also spent some time in the Sukhoi Su-30MKI, although he has not flown it operationally.

“The Tejas is far better in terms of manoeuvrability, as well as the systems on board,” he says. “In every sense it is better. It is clearly demarcated as a different generation.”

Showing off this manoeuvrability was the aim of Dhankhar’s display routine, which he also performed during the Aero India show. This is designed to highlight the jet’s fly-by-wire capability through key manoeuvres such as the main radius turn and negative-g turn – the latter being rarely performed. 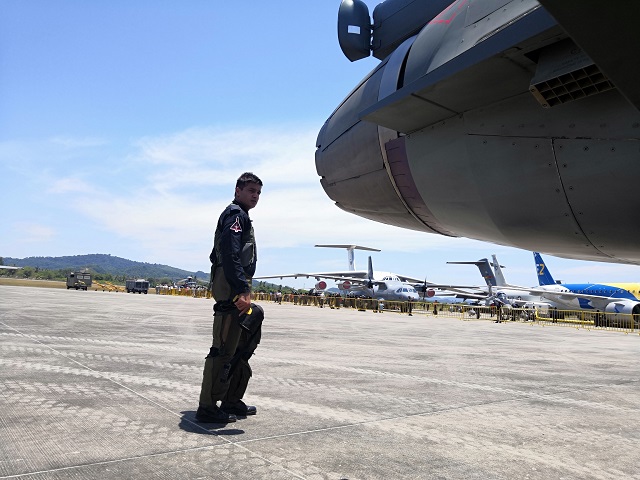 So far, 45 Sqn has received 12 IOC-specification aircraft, with another four to be delivered soon. Next year it will realise its full strength of 20 jets, when it receives four two-seat examples in the FOC configuration.

The main difference between the two standards is software. FOC-model aircraft will be cleared to 8g, while current IOC examples are limited to 6g. In addition, FOC aircraft will be equipped for air-to-air refuelling. Once deliveries of FOC aircraft begin, existing IOC jets will be upgraded to the enhanced configuration.

Dhankhar is clearly pleased with the Tejas. He praises its agility and says the type's g onset rates are “very comfortable”. He also believes that the type's control laws have been well implemented.

“It responds to your inputs in the entire envelope very well,” he says. “It's not as if you need to be at certain speeds to get the maximum out of it. At any speed it gives you whatever you demand.”

He also appreciates the safety factors built into the jet, in that it is impossible to depart from the approved flight envelope limits. This makes the aircraft “very, very safe,” he says. “This is a very positive thing, but at the same time this can be marginally negative because at times, if I would like to exceed the aircraft’s limits, I can't do that,” he adds.

On the aircraft’s human-machine interface, he feels that everything is exactly where a pilot will expect to find it, with an intuitive layout that eases cockpit familiarisation. Apart from the master arm switch, virtually everything necessary to operate the aircraft is located on the throttle or control column, in line with modern hands on throttle and stick design methodology.

Although Dhankhar’s aerial display, performed with white smoke trailing from wing-mounted pods, was as powerful as any modern fighter performance, he stresses that air shows are not his main line of work. 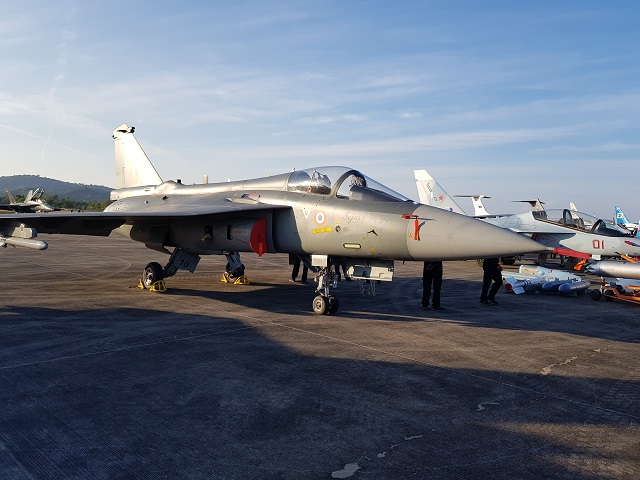 “My primary job is to exploit the aircraft operationally. Displays as such are a side role for me. If it is required I'll do it, but otherwise the OEM does it on its own… I'm not a display specialist, but I'm capable of doing it,” he says.”

As an example of this operational focus, Dhankhar notes that he has had the opportunity to fire or drop every weapon the Tejas has been cleared to carry: both air-to-air and ground-attack munitions. He feels the accuracy is excellent, and that the HMI makes it very easy to employ all weapons across the envelope. He believes that the Tejas’s helmet-mounted cueing system, which allows the pilot to target weapons without pointing the aircraft's nose at the target, offers far greater freedom than the MiG-21, and is “much more advanced as compared with the Su-30”.

Given the advanced state of technologies such as beyond visual-range (BVR) missiles and helmet-mounted cueing, intuitively this would mean that a fighter’s manoeuvrability would become less of a priority. Dhankhar, however, says that a jet’s ability to perform aggressive manoeuvres remains a crucial consideration, because sooner or later a “merge” will occur and a pilot will find themselves in close quarters with enemy aircraft.

“There are situations where you need theg,” he says. “Most of the time you can rely on sensors and BVR weapons, and you do not need to engage in close combat. But you should not be a sitting duck in case somebody closes in for some reason. Merges do take place despite whatever type of sensors you have. There are times when the criticality of the mission is high, and you need to take certain risks. In those missions you tend to go further, and the merges take place. If you are capable in terms of pulling moreg, you may turn these situations to your advantage. That is what I feel as a fighter pilot.” 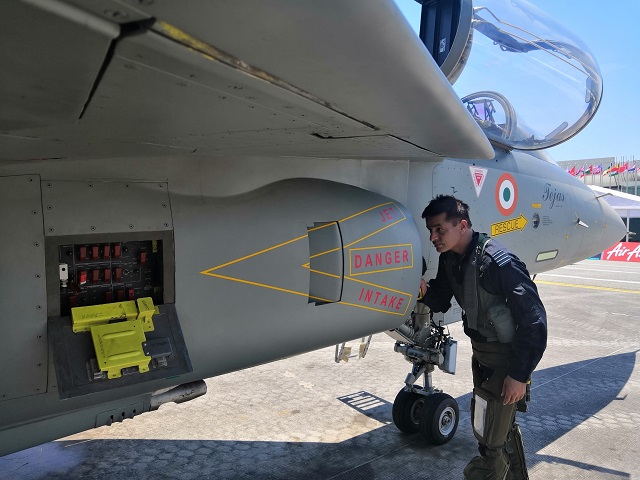 Dhankhar checks the aircraft's intake prior to performing

In the air-to-air mode, the Tejas has been cleared to carry Russian Vympel R-73 close combat missiles (CCM), and Rafael I-Derby beyond-visual-range air-to-air missiles. It is also equipped with a 23mm cannon.

Dhankhar says the gun has limited utility in air-to-air combat and is primarily useful for engaging soft targets that may pop up. He notes that there is no mission in which the gun is designated as the aircraft’s primary weapon.

“Most of the crosses that take place in aerial combat are through the frontal. Because it is difficult to launch weapons when somebody is head on, if you give a burst with the gun you might get one hit. Today's army guys still carry a bayonet. The gun is just like that: an aerial bayonet. Missiles have a minimum range. Less than that and the gun is the only option.”

New Delhi has approved the procurement of 73 Tejas Mk1As and 10 Tejas Mk1 trainers, plus two simulators and related infrastructure, worth $7 billion. A Tejas Mk2 is also being planned by India’s Aeronautical Development Agency. This enhancement activity will see the type’s maximum all-up weight grow to 17,500kg (38,500lb), up from 13,500kg for the baseline Tejas, and the aircraft will also be 1.35m (4.9ft) longer. The longer fuselage allows for more fuel behind the cockpit, and the Mk2 will be able to carry additional external drop tanks also.

Equipped with a more powerful GE F414-INS6 engine, the Mk2 will have improved sensors, and greater ability to carry advanced stand-off-range weapons. The input of frontline pilots such as Dhankhar will no doubt influence how this type develops.

“Because of the jet’s architecture it’s very easy to upgrade,” says Dhankhar. “Having flown this aircraft, I can say it has a great future.”