ANALYSIS: How Monarch ran out of room in crowded market

The demise of Monarch Airlines during its 50th year of operations may have surprised plenty of its customers, but it was perhaps inevitable that there would be a casualty in the overcrowded market from the UK to popular Mediterranean holiday resorts.

UK-based Monarch completed its transition to scheduled-only short-haul operator in mid-2014 – a strategy shift effected not because it saw any great untapped potential in that sector, but because its previously core charter market was "structurally flawed", the carrier's chief executive Andrew Swaffield said at the time.

While the move had a logic given that passengers were increasingly creating their own holiday packages via the internet, the unfortunate consequence was that Monarch's business model was put in direct competition with low-cost giants such as EasyJet and Ryanair.

Monarch arguably still held some limited market advantage over competitors in flying traditional package-holiday routes to North Africa and Turkey, largely through its historical brand association with those destinations.

But when these holiday markets fell out of vogue in the UK, amid uncertain geopolitical circumstances – and having jettisoned long-haul operations as part of an earlier restructuring – Monarch had little option but to return to crowded European sun and sand markets. 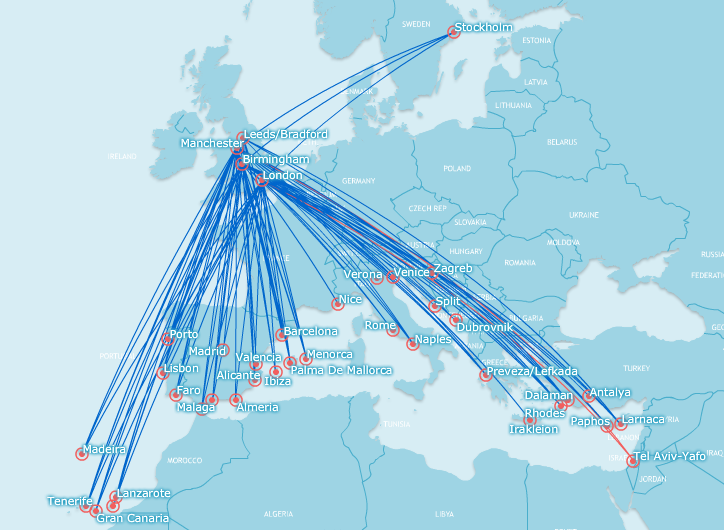 The situation was exacerbated by developments such as UK leisure operator Jet2's encroachment on its markets by establishing bases in Birmingham and London Stansted, backed by a strong presence in the north of England.

That market saturation, and consequent pressure on yields, meant that as Monarch's financial situation worsened, it lost attractiveness as a takeover target for rivals and as a continued investment for already bruised shareholder Greybull Capital.

Put another way, Monarch increasingly looked like part of the problem rather than the solution to overcapacity in Europe – a region that has been ripe for consolidation for a while now.

Almost half of these services were on routes to Spain, while almost a combined third of the routes served Portugal, Italy and Greece.

Notably, Monarch was serving only six routes in Turkey – mostly to Dalaman. That compares with the 13 Turkish routes it operated three years ago. Turkey had accounted for the second-highest share of Monarch capacity in September 2014. Last month, it represented the fourth highest, having slipped behind Italy and been overtaken by Portugal.

The reduced Turkish operation reflected terrorist activity and the attempted coup in the country last year, hitting leisure travel demand. The same had happened to Tunisia, after the June 2015 attacks in Sousse, while the downing of a MetroJet aircraft over Sinai in the autumn of that year hit Egyptian demand. UK operators are still blocked from serving key resort Sharm el-Sheikh on the basis of a UK government travel advisory.

Egypt and Tunisia – to which Monarch served seven and two routes, respectively, in September 2014 – disappeared completely from its network. Egypt had been Monarch's fifth-biggest market in terms of seat capacity three years ago.

Instead, Monarch put more emphasis on Portugal. In September, the carrier operated 14 Portuguese routes, compared with six the same month three years ago.

But others also focused on this market. FlightGlobal schedules data shows that in September only one of its 14 Portuguese routes was uncontested: Birmingham-Lisbon. Notably, on routes to the Algarve gateway Faro – to which it operated from all five of its UK airports – it was in competition with at least three different carriers.

Spain, where it retained a similar-sized operation, was likewise heavily contested. For example, the airline was one of seven operators serving Malaga from both Birmingham and Manchester in September. Three years ago, there were five airlines operating from Manchester and only two from Birmingham.

Capacity more than doubled on Birmingham-Malaga, with roughly 200 more flights added in September to make 334 frequencies last month. While incumbents Monarch and Ryanair both upped their capacity, almost three-quarters of the extra flights were from new players on the route.

While airline collapses usually result in rival carriers moving in to hoover up the demand, existing high capacity in the market means it is not clear the same thing will happen this time – at least in the short term.

For example, overall seat capacity from the UK to Portugal and Spain this September is up 16% and 8% respectively on the same month last year.

Airlines will heave "a great collective sigh of relief that something has happened to break the mould", suggests Carl Denton, managing director of Sven Carlson Aviation Consulting, considering the wider market impact of Monarch's collapse.

Denton says that airlines had been "stuck in the same groove" and that the collapse of Monarch might be the "nudge the record needed", leading to a shakeout in the UK market. He says there was so much capacity going to the western Mediterranean that yields were "catastrophic" and "wafer thin".

He does not expect any of Monarch's vacated routes to be taken up by rivals, given the amount of competition still on those routes.

"They say possession is nine-tenths of the law, and where you don't have exclusivity it's a really gloomy picture where you have to fight everywhere for market share," he says.

Adding to the situation is that Ryanair has its own challenges around capacity. The Irish carrier has expanded rapidly in Portugal and Spain – operating, respectively, 30% and 12% more seat capacity to these countries on routes from the UK in September, compared with the same month last year.

While the carrier has barely used its pilot-rostering challenges to suspend routes into Spain and Portugal – its Glasgow-Las Palmas and Newcastle-Faro links are the only ones of the 34 routes suspended over the winter to link the UK with either country – the challenge of serving its existing network this winter with 25 fewer aircraft leaves it with less room to manoeuvre than usual.

Rival carriers, meanwhile, may be more interested in taking advantage of any pickings in the German and Italian markets instead, given the major restructuring in play at Air Berlin and Alitalia.