More than 30 years ago, the Swedish military determined a need to maintain long-range surveillance coverage if part of its ground-based air defence radar network was out of action. From a description seeking "a radar on a tall mast", its airborne early warning and control (AEW&C) system was born.

The selected "gap-filler" solution combined the Saab 340 twin-turboprop with an Erieye surveillance radar mounted atop its fuselage. The Swedish air force's initial FSR standard required a lone system operator to fly aboard the aircraft – largely to switch on and monitor the sensor, with collected data downlinked to the ground. Six of the aircraft were delivered.

An evolved concept of operations led to an upgrade to the current airborne surveillance and control (ASC) standard flown today. This increased the onboard operator total to three, with the type's duties expanded to include fighter control.

As the Cold War faded into memory, the perceived need for the Saab 340-based ASC 890, or Argus, decreased ­– to the point where Sweden felt comfortable selling two-thirds of its fleet to export customers. Thailand and the United Arab Emirates each acquired two examples.

Given the threat situation now playing out in the Baltic Sea region, the extreme reduction to Stockholm's AEW&C fleet can be viewed in a different light. Far from providing an emergency gap-filler capability, the radar-equipped aircraft flown by the Swedish air force's ASC 890 unit are now a strategic asset in monitoring movements from the east.

Assigned under the service's F7 Wing at Såtenäs, but operated from Malmen air base, the unit uses the call-sign "Skibox", due to the shape of the Erieye radar array's distinctive fairing. Flown at 20,000ft, the sensor provides 150˚ coverage on each side, and is capable of tracking up to 1,000 airborne and 500 maritime tracks simultaneously. 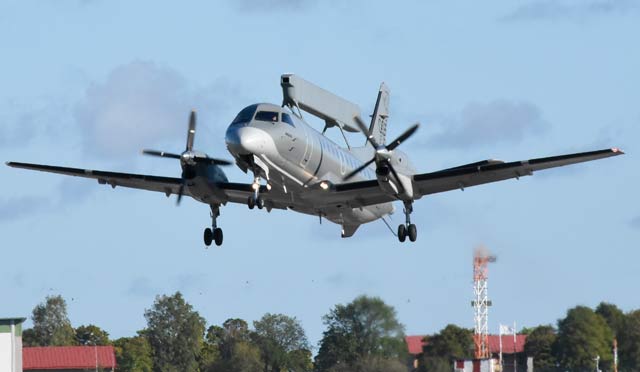 Missions typically last for 4.5h, with the aircraft having an on-station speed of 170kt (315km/h) and a maximum endurance of 5.5h. Its crew complement comprises two pilots and a flight engineer, and, seated at identical consoles, a mission control officer, who serves as fighter director; combat control operator; and a system operator/radar specialist. Two observers can also be carried.

If being held on readiness with the crew onboard to support a quick reaction alert mission, the aircraft can be airborne within 15min. The radar can be switched on prior to or after take-off, and be fully functional within 2min.

Once airborne, the platform can relay information about hostile tracks to fighters, enabling them to operate without switching their own radars on.

"We can see pretty much everything," says mission control officer Lt Alexander Thörner. "If we know what we are looking for we will find it 99 times out of 100 – if it's airborne or on the surface. It's really hard to hide."

The air force cites a maximum detection range of more than 243nm (450km) against airborne targets, and up to 173nm for surface ships. Cruise missile-sized targets can be seen from 108nm, and the Erieye radar has a claimed unique capability to detect hovering helicopters. The aircraft's interrogation friend or foe system has a range of over 270nm, further boosting situational awareness.

The system is capable of performing around 20-25 different mission types, including supporting air interdiction duties and locating ground-based air-defence assets. Its main sensor also has some overland surveillance capability, and has been able to determine major roads and moving vehicles during testing.

In the words of Saab and the Swedish air force, the Erieye system is a "stealth-killer", due to its ability to detect threats which use low-observable technology.

Sweden's aircraft currently lack a maritime AIS fit for automatic vessel identification, but this has been used in testing and is expected as a future update.

"Some parts of the mission system are supposed to be changed by 2020 – we must have a quick decision, in order to continue work," says Maj Henric Svensson, squadron commander of the ASC 890 unit. While the Saab 340 airframes could go on until about 2030, their radars and software must be updated. "You need to take the decision now, as some subcontractors are going out of the [business] area," Svensson cautions.

Other missing elements which the squadron would like to address include the platform's lack of a self-protection system or satellite communications equipment.

Due to the small fleet size, the air force is not ruling out the possibility of changing to a different airframe, although no decisions have yet been made. The Erieye system has already been integrated with the larger and longer- and higher-flying Saab 2000. A higher-end system option would be Saab's new GlobalEye product, which is based on an adapted Bombardier Global 6000 business jet.

Svensson points to his current aircraft's lack of speed – its maximum performance is 250kt – as a limiting factor during operations. "When flying into a strong headwind you almost have the impression of going backwards," he quips. However, the type's low operating cost, which is quoted as being $2,500/h, is "around one-tenth the cost of a larger system", he notes.

Today, the ASC 890 unit has 16 pilots, five full-time system operators, and five who can be called in from other duties if required, against a required total of 12 – plus 14 engineers. A further two pilots are being trained currently, and the same number of operators could begin instruction later this year.

"Our squadron is quite small, but we do a lot of different tasks," Svensson notes. ASC 890's aircraft currently accumulate around 15 flying hours per week.

Pointing to the Swedish air force's other intelligence, surveillance and reconnaissance assets – including two electronic intelligence-gathering Gulfstream GIVs and a camera-equipped Saab 340 which spends around 14 weeks per year conducting Open Skies treaty missions for Stockholm – he notes: "it would be very clever to have an aircraft that could do many missions, and VIP [transport]."

Saab has enjoyed major success with its Erieye airborne early warning and control (AEW&C) system, with the Ericsson-developed sensor having so far been integrated with the Saab 340 and 2000 twin-turboprops, plus Embraer's ERJ-145 regional jet, for eight nations. 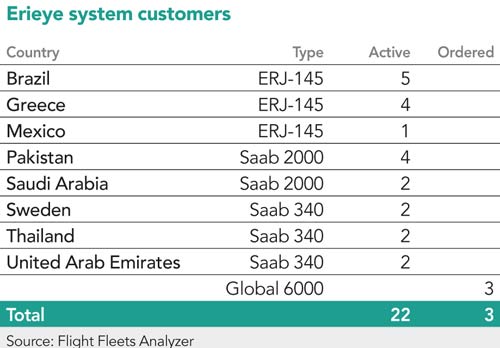 A new version is also being prepared for the Bombardier Global 6000-based GlobalEye surveillance aircraft, three of which are on order for the United Arab Emirates. The first two airframes are at Saab's Linköping site undergoing modification, with the other to arrive later this year. Ordered in November 2015, no delivery schedule has been given for the new capability, which combines airborne early warning, maritime and ground surveillance sensors on a single platform.

"Soon we will have about 25 operational systems in the world," says Jonas Härmä, head of sales and marketing, AEW&C, for Saab's surveillance business area. Flight Fleets Analyzer records a current 22 Erieye-equipped aircraft as being operational with the air forces of Brazil, Greece, Mexico, Pakistan, Saudi Arabia (although this customer is referred to by Saab only as "Country X"), Sweden, Thailand and the UAE.

Saab claims to have so far secured 50% of the accessible market for AEW&C sales, and Härmä says it is "absolutely determined to increase that in the short-to-medium period".

The company says its new-generation Erieye ER sensor ­– which employs gallium nitride technology and fits within the same roof-mounted array as its earlier standard – can detect smaller and faster targets, and has 70% more range. The active electronically scanned array is currently undergoing testing in Gothenburg.

From an operating altitude of 30,000ft, the GlobalEye will be able to see out to the horizon some 216nm (400km) away, and offer an 11h endurance. Its baseline configuration features five onboard operator stations.

Selected following an evaluation of almost 30 candidate aircraft types, the Global 6000 offers a lower cabin altitude and reduced noise for its crew.

"Whoever acquires this aircraft will get both a tactical and a strategic advantage," Härmä says. Saab's programme schedule is running "perfectly to plan," he adds, with the system meeting or exceeding requirements.

Saab's Swordfish maritime patrol aircraft offering – which is also now focused on the Global 6000 airframe and seeking a launch buyer – has 70% commonality with the GlobalEye, including using the same electro-optical/infrared sensor and Leonardo Seaspray 7500E maritime surveillance radar.