Local media reports were in a frenzy, describing the visit as a signal of ever-closer bilateral ties and a “complete reset” of India’s relationship with the Gulf.

Since the Narendra Modi government took office in 2014, state visits between the Gulf and India have been frequent. Pledges of infrastructure investment and talks of increased trade, as well as the boosting of defence links, are all part of the increase in co-operation between the two countries.

The ever-warming relationship is mirrored in air traffic between India and the United Arab Emirates, which ranks the highest among the Gulf states.

In 2016, India was the biggest passenger market for Dubai. Numbers increased more than 10% in this sector to reach 11.4 million, accounting for almost 14% of the traffic at Dubai.

Indian traffic also dominates nearby Abu Dhabi, where Etihad has a partnership with Jet Airways. Its Indian traffic grew 13% last year, representing almost a fifth of all passengers.

Most of these passengers are not visiting Dubai or Abu Dhabi, of course, but transferring to flights for international destinations further afield.

Data from FlightMaps Analytics shows that, today, there are 51 routes between the two countries, with 11 routes added between 2012 and 2017.

Flights from Lucknow, Kolkata, Ahmedabad, Pune and Mangalore were added to Abu Dhabi, while services to Sharjah were operated out of Chandigarh, Jaipur, Varanasi and Tiruchirappalli. Meanwhile, Dubai saw new flights from Chandigarh and Madurai. 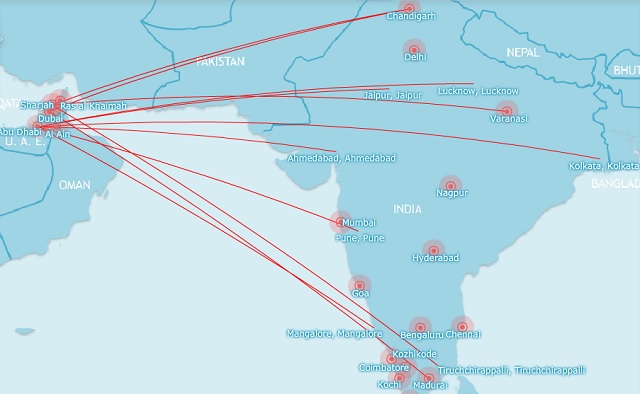 The main contributor to the new services was Air India Express.

The low-cost arm of the debt-ridden state carrier added three of the routes in 2016 alone: Chandigarh-Sharjah, Chandigarh-Dubai and Tiruchirappalli-Sharjah.

In an earlier interview with FlightGlobal, Air India Express chief executive K Shyamsundar said that the carrier is pushing to double its market share of India’s international departures to 10% by 2019.

Shyamsundar said that Air India Express will look to place an additional focus on its Middle East routes, and described the India-Gulf link as a “golden goose that no one has fully exploited.” A key focus is upping the number of slots at the major Gulf hubs.

FlightGlobal schedules data shows that Air India Express provides the third-highest ASKs among the nine carriers operating between the two countries. The carrier’s ASKs currently stand at nearly 600 million per month, with Mangalore-Dubai as the route with the highest ASKs, at 47 million.

Emirates currently supplies the highest number of ASKs, at more than 1.2 billion. The carrier’s Mumbai-Dubai route offers the most ASKs among all India-UAE routes, at over 201 million per month. 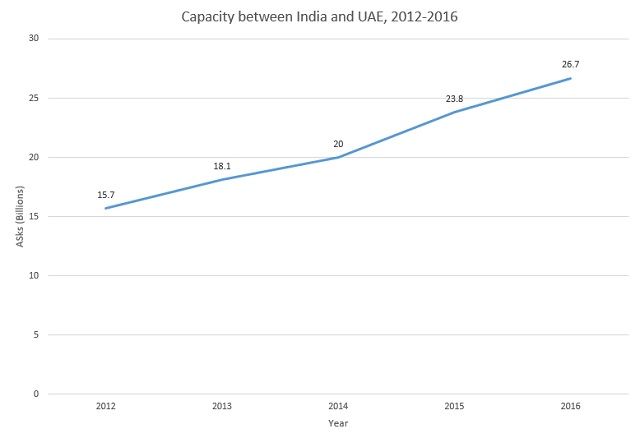 Moving forward, it is highly likely that even more services between India and the UAE will be added, especially by LCCs.

With the antiquated 5/20 rule now replaced by the Regional Connectivity Scheme (RCS), airlines only need 20 aircraft and 20% of capacity deployed domestically to operate international routes.

Airlines previously had to complete five years of operations and grow their fleet to 20 aircraft before flying internationally.

Of the 11 routes added between India and the UAE in the past five years, SpiceJet was the only other low-cost player to enter the segment, with its Madurai-Dubai service. 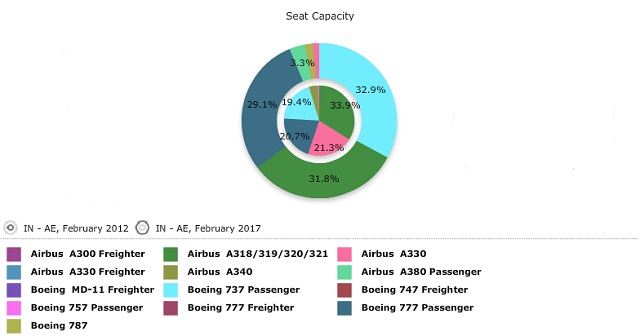 The aircraft types that operate between the two countries have changed significantly over the past five years.

Data from FlightMaps Analytics shows that, in 2012, the Airbus A320-family held top spot among airlines operating India-UAE routes, with 33.9% of seats offered.

Today, deployment of the Boeing 737 has shot up and replaced the former as the primary aircraft – with airlines offering 32.9% of seats on the narrowbody. The A320 lies in second place, only 0.9 percentage points behind.

Meanwhile, the A380 is a new entrant in the skies. Emirates deploys it on its Mumbai-Dubai route, while Etihad uses the superjumbo on Mumbai-Abu Dhabi. Combined, the A380s offer 3.3% of seats.

Flight Fleets Analyzer shows that Indian airlines have 868 aircraft on firm order to be delivered between 2017 and 2030. This is led by IndiGo's order for 416 Airbus A320neos, with GoAir and SpiceJet also each having ordered more than 100 narrowbodies.

The attraction for new single-aisle aircraft models is simple: demand ensures consistently high-load factors with its modest seat capacity, and better fuel efficiency means they can fly farther. It would not come as a surprise that narrowbodies increase their dominance in the skies.