ANALYSIS: Just two women among the chiefs of top 100 airlines

FlightGlobal's latest survey of gender diversity in the airline industry shows that the number of female chief executives among the top 100 carriers has fallen to just two in the past 12 months: Air Europa's Maria Jose Hidalgo and VietJet Air's Nguyen Thi Phuong Thao.

Since the 2017 survey, two female chief executives have left carriers featured in the ranking. Carolyn McCall resigned from EasyJet to take up a role at UK broadcaster ITV and Thai Airways announced the retirement of Usanee Sangsingkeo from her role as acting president. McCall has been replaced by Johan Lundgren, while Sumeth Damrongchaitham has been named as Sangsingkeo's successor. 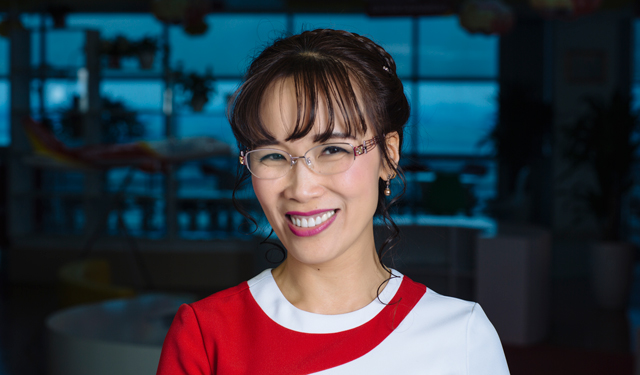 FlightGlobal's gender diversity survey comes weeks after Qatar Airways chief executive Akbar Al Baker put the spotlight on the airline industry with his "joke" at the IATA AGM in Sydney that "of course" his carrier "has to be led by a man because it is a very challenging position".

The survey also shows that the proportion of C-suite roles taken by women has increased slightly from last year's survey, from 11% to 12%; that the airline industry is still significantly behind trends in the wider economy; that low-cost carriers have greater gender diversity among senior leaders than legacy operators; and that North America has the greatest gender diversity of the major regions.

With women accounting for 2% of chief executives, the leading airlines continue to lag wider gender-diversity trends. The Hampton-Alexander Review, released at the end of 2017, reported that 4.3% of UK FTSE 350 companies were led by women. Women's-rights organisation Catalyst meanwhile puts female representation among S&P 500 leaders at 5% in January this year.

Diversity in the airline industry is also behind the wider economy across the rest of the executive suite, with airlines having 50% fewer female executives on average. Grant Thornton's Women in Business Report 2018, which surveys companies across the world, shows that women were in 24% of senior positions at mid-sized businesses in 2018, while FlightGlobal's latest survey reveals that 12% of executive roles at leading airlines have a female incumbent.

In total, women were in 72 of the 600 positions surveyed by FlightGlobal across the leading 100 airlines – covering chief executive, chief financial officer, chief operating officer, chief commercial officer, chief information officer and HR director, or their equivalents. That is a slight increase from last year's survey, when the figure was 64, or 11%. 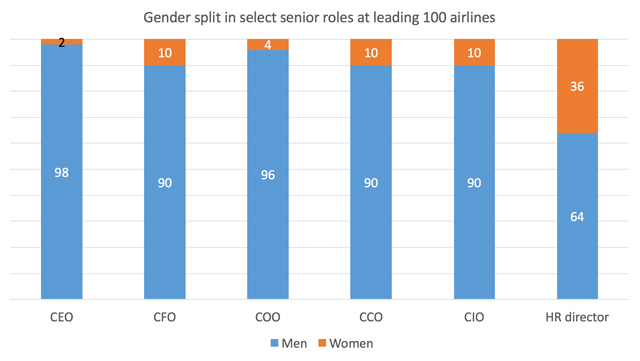 Source: Company websites and financial reports, and FlightGlobal data. Notes: Similar roles of equivalent seniority have been considered where specified job titles are not used

The airline industry still exceeds trends in the wider economy when it comes to women in the position of HR director. In the top 100 airlines, women account for 36% of incumbents in this role, significantly ahead of Grant Thornton's wider economy figure of 23% (a 2017 figure because Grant Thornton did not provide an updated figure in its 2018 report). 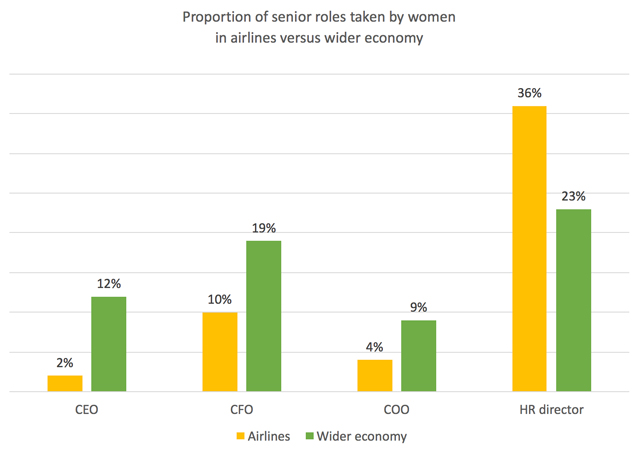 For the five roles other than chief executive, there has been a minor increase in female representation year-on-year.

The most significant growth since last year's survey comes from women taking on HR director roles. There were also two more female chief financial officers in this year's survey – 10, compared with eight in 2017. There was the same rise in female chief information officers. 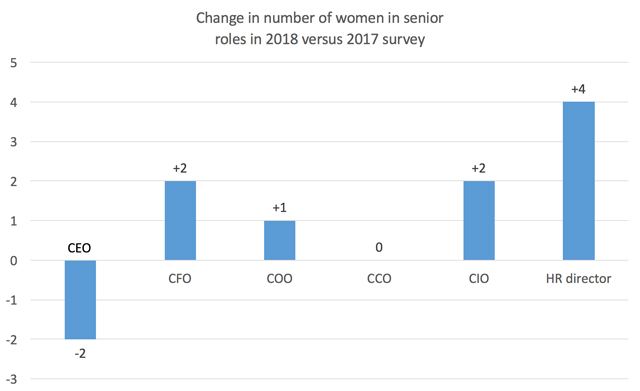 Removing the HR director position from FlightGlobal's survey reduces the proportion of roles taken by women in the top 100 airlines to just 7%, or 36 of the 500 positions.

Overall, only AirAsia, Air Canada, EasyJet, Jetstar, Qantas and South African Airways achieved parity in terms of gender balance, with each employing three women and three men in the six surveyed roles. The remaining airlines had either more men or no women at all among the six roles.

Indeed, some 52 of the top 100 airlines employ men in all six of the surveyed positions.

Continuing a trend from last year's survey, low-cost carriers employ more women in senior positions. Among the 28 LCCs in the top 100, 17% of positions are held by women. At the remaining 72 legacy operators, just 10% of the roles have a female incumbent.

Splitting the results by region, men take the majority of the six surveyed roles in every one.

North America leads among the major regions in terms of female representation at executive level. Among the 13 airlines from the region included in the survey, the figure is 21% – an increase of five percentage points from last year.

Some 17% of the surveyed roles at African carriers had female occupants. Only three African carriers make the top 100, however, meaning that the region's female airline senior managers all work at South African Airways. Among recent appointments at the embattled carrier, Pumla Luhabe became chief commercial officer in April.

Female representation among European carriers was at 12% across the 30 carriers surveyed, down from 14% in 2017. This is partly explained by McCall's departure from EasyJet.

The Middle East and Latin America continue to lag behind other regions, with just 6% and 9% of roles taken by women, respectively – the vast majority of them HR director positions. 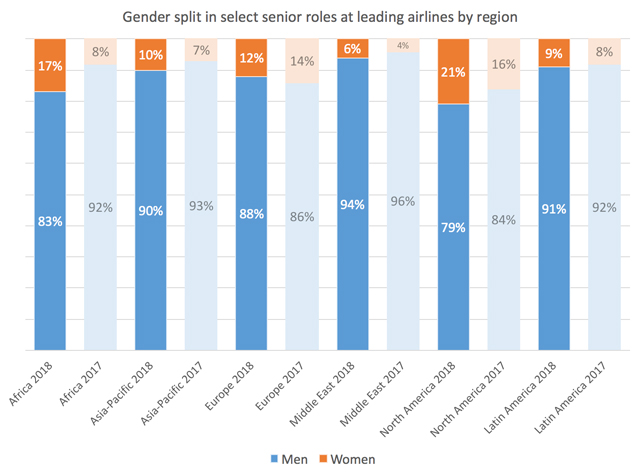 Overall, the airline industry continues to lag global trends for diversity in senior roles by some distance. There was recognition of the disparity at the IATA AGM, even before Al Baker's widely reported comments. It remains to be seen if these developments will prompt a fresh effort to address the issue.

NOTE: FlightGlobal's survey of gender diversity in the top 100 airlines is based on publicly available data. The primary sources are company websites, financial reports and FlightGlobal data. Research was undertaken in mid-June 2018. Given the fluid nature of employment, the survey can only give an indicative snapshot of diversity in the industry. The top 100 airlines are drawn from FlightGlobal's 2018 ranking of carriers by revenue passenger-kilometres (RPKs). Similar roles of equivalent seniority are considered where the specified job titles are not used.