As military aircraft makers occupy the exhibit halls of the 19th FIDAE air show in Santiago, Chile, in early April, the focus of the Chilean air force's acquisitions staff is likely to be about 8,000 miles away, in a small city in southeastern Poland.

The nation's air force has several pending requirements – including fighter upgrades, aerial firefighting aircraft, new transports and helicopters – but has only one signed contract. In 2016, the service ordered six new S-70i rotorcraft from Sikorsky. Those aircraft are on track to be delivered from the PZL Mielec final assembly line for the international Black Hawk in the third and fourth quarters of this year, the Lockheed Martin-owned manufacturer confirms to FlightGlobal.

Although those six airframes represent one of the few scheduled fleet additions to Latin American air forces this year, there will be no shortage of exhibitors at the event, hosted by the 10th Aviation Group's facilities at Comodoro Arturo Merino Benítez International airport in the Chilean capital. About 580 exhibitors and 60 official delegations attended the 18th FIDAE air show in 2016, and organisers expect more participation this year. 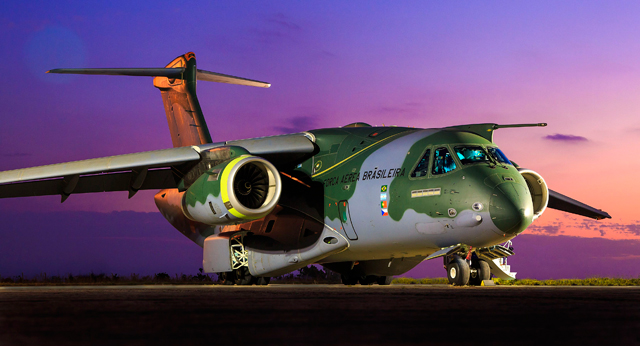 Embraer aims to bring one of its KC-390 prototypes to Santiago: a potential future customer

A preliminary count of exhibitors was not available as Flight International went to press, but it is already clear the event will be well attended. The 2016 show hosted the regional debut of the Lockheed Martin F-22 in Chile, and this year's event will mark the first appearance of Lockheed's F-35 Lightning II in South America. The single-engined stealth fighter will be parked in the static display, and the US Air Force's twin-engined F-22 will make a return appearance, also in the static display.

As the Latin American market recovers from a two-year spending decline in 2015 and 2016, the world's largest aerospace suppliers expect opportunities for growth.

"We view the S-70i helicopter market in Latin America very positively," Sikorsky says. "This year, we are celebrating 30 years of the Black Hawk in Latin America. In the past 10 years, the Black Hawk fleet in the region has roughly doubled in size. Colombia led the way with almost 100 aircraft. Mexico has the second-largest fleet.

South America's largest air show also could witness the first appearance of the Embraer KC-390: the jet-powered tanker-transport scheduled to be delivered to the Brazilian air force in less than a year. In 2010, a previous Chilean government signed a memorandum of understanding with Brazil, committing the nation's air force to order six of the aircraft. The current government's enthusiasm for the acquisition remains unclear, as does the schedule for the KC-390's debut appearance in Santiago.

"We are working on it, but there are still some final details to be confirmed regarding the availability of the aircraft," Embraer told FlightGlobal in early March. "The KC-390 is a tactical transport aircraft designed to set new standards in its category, while presenting the lowest life-cycle cost on the market. Some of the strong aspects of the aircraft are increased mobility, rugged design, higher flexibility, state-of-the-art proven technology and easier maintenance.

"Another important characteristic is that the aircraft can perform a variety of missions, such as cargo and troop transport, cargo and paratroopers airdrop, aerial refuelling, search and rescue and aerial firefighting," Embraer adds.

Airbus Defence & Space also is drawn to attending FIDAE this year, with hopes of making progress on an expected sale of the A400M into the region, along with other military aircraft.

"We cannot disclose specific countries we are in discussions with regarding the A400M, but you will remember that the aircraft has visited the region several times, especially Mexico, Chile and Peru," Airbus says. "Our general outlook for the region is to sell about 15 aircraft in the next five years, including at least one A400M contract."

Latin American defence spending rose by 3.2% in 2017, reversing sharp declines of 4.7% in 2015 and 5.1% in 2016, according to the Military Balance 2018 report released by the International Institute of Strategic Studies (IISS) in January. The IISS credits the regional spending growth to a slow improvement in the region's macroenomics, driven by growth in worldwide demand for raw materials.

But the one-year recovery does not change the fundamentals of the region's defence posture.

Investment in new military equipment remains low compared with other regions, amounting to only 9% of overall defence spending. Defence budgets account for 1.7% of regional gross domestic product for Latin America and the Caribbean. "As there are no major external threats in the region, and no major inter-state conflicts, domestic challenges are driving military procurement needs," according to the IISS report. 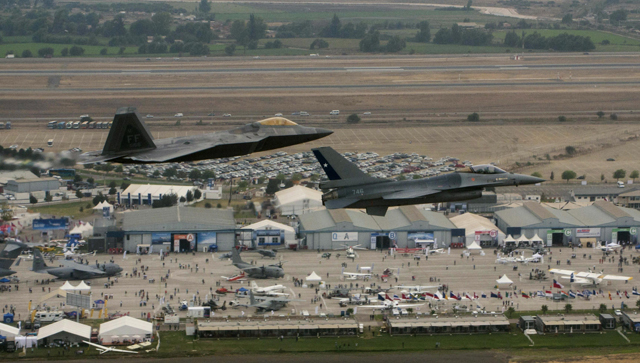 The US Air Force's F-22 (left, with a Chilean F-16) made debut FIDAE appearance at last show

Those domestic challenges include a political crisis in Venezuela, with 650% inflation devaluing an already depleted national treasury. In other countries, the economy is growing, but there seems to be a general lack of urgency on defence procurement compared with other budget priorities. In Argentina, for example, the government has acquired a fleet of new Textron Aviation Beechraft T-6As, but has not followed through on several proposals to fund a replacement for the nation's grounded Douglas A-4E Skyhawks.

By tradition, Chile has boasted the best-equipped and best-maintained military force in the region. However, the controversial financing arrangement the military uses to buy new weapons systems is under review after a corruption scandal exposed two years ago. The "Ley Reservada del Cobre" or Restricted Law on Copper dictates that Chile's state-owned copper mining company set aside 10% of all export revenues into a special fund that buys equipment for the military.

Critics of the Chilean copper law, including the Sweden-based Stockholm Institute for International Peace (SIPRI), have argued that such financing schemes are un-democratic, as they remove military equipment spending from political debate over national priorities. Last year, the army punished 11 officers and civilian employees for using the funding accounts to embezzle 5 billion pesos ($11 million). The affair has led to proposals to reform the system, but it is not clear yet if any changes will be made.

Despite the scandal within the acquisitions system, Chile's military leaders are still open to pursuing new requirements. Within the past year, significant interest has materialised in purchasing large aircraft for the firefighting mission. The Chilean government declared a national emergency in January 2017 after a wildfire described as the most powerful in the country's history killed 11 people, including five firefighters.

At the height of the crisis several countries and organisations dispatched large firefighting aircraft to Santiago – including Evergreen's Boeing 747 Supertanker, two Brazilian Lockheed C-130s equipped with the modular airborne firefighting system, and a Russian Ilyushin Il-76.

Last July, the Chilean air force's commander, Gen Jorge Robles, returned from a visit to the MAKS air show near Moscow. According to local press reports, Robles said he met with Russian officials about the possibility of acquiring the Beriev Be-200, an amphibious aircraft manufactured by Irkut that can fight fires, as well perform search and rescue, maritime patrol and transport missions.

If the Chilean government moves forward with the requirements, the air force will not lack options. The firefighting mission is included in the brochure specifications for each of the large military transports on the market, including the A400M, C-130 and KC-390.

The availability of the KC-390 as a Latin American-built option puts a spotlight on a growing revival within the region of local military aircraft production. The activity offers a faint echo of the regional manufacturing landscape in the 1980s, when Argentina produced Pampa jet trainers and Pucara attack aircraft and Brazil exported EMB-314 Super Tucano turboprops configured for combat.

Latin American aircraft manufacturing outside Brazil remains tiny compared with any region of the world except Africa, but ambitions within the region are clearly growing. Embraer is exporting A-29 turboprop attack aircraft and ramping up production of the KC-390. In Argentina, Fábrica Argentina de Aviones (FAdeA), the descendent of the company that designed the Pampa and Pucara, is testing a modernised version of the Pampa – the IA-63 Block III – on a shoestring budget. FAdeA also is testing a prototype of the IA-100 basic trainer.

Other countries are also striving to gain a toehold in military aircraft production.

For example, Mexico already has a thriving supplier cluster for low-cost commercial aircraft component manufacturing, but has outlined long-term ambitions for designing and building basic military aircraft. As perhaps a first step, the Mexican military has acquired the S45 Balaam, a small unmanned air vehicle with a 5m (16.4ft) wingspan designed by Guadalajara-based Hydra Technologies.

In Colombia, the state-owned Corporation of the Colombian Aeronautical Industry (CIAC) is expanding its capabilities beyond maintenance, repair and overhaul service. In 2009, CIAC signed an agreement with US kit-built aircraft supplier Lancair International to assembly Legacy trainers for the Colombian air force.

Four years later, CIAC began modernising the air force's Embraer T-27 Tucano trainers, as well as manufacturing components for Brazil's KC-390s. CIAC also is continuing to use its IRIS unmanned air vehicle as a testbed platform. Meanwhile, the company signed an agreement last September to partner with Airbus Defence & Space to develop and produce the Atlante+ UAV for the export market.

So far, Chile's state-owned ENAER has not made any moves to expand beyond its roots as the maintenance wing of the country's air force. Although it once manufactured the Piper Saratoga-based T-35 Pillan military trainer, the 34-year old ENAER now concentrates on maintenance and modernisation services. For example, the Santiago-based company is a regional supplier of C-130 modernisation services. The company also has worked with Dutch suppliers on updating Lockheed F-16A mid-life update fighters with structural upgrades.