ANALYSIS: Malaysia Airlines and the long road to profitability

The past few years have, unarguably, been Malaysia Airlines’ worst, with two major crashes, a searing corporate restructuring engineered by Malaysia’s sovereign wealth fund Khazanah Nasional, and leadership changes. Now, finally, things look to be back on track.

On 8 August 2014, in the wake of the MH370 and MH17 disasters, Khazanah Nasional announced that the carrier would be privatised and restructured, in a bid to bring it back to profitability.

A 12-point restructuring plan was laid out. Headcount would be slashed and the business model “reset … through a more regionally focused network, lower cost structure and greater emphasis on revenue yield management”.

Christoph Mueller was named to head the new Malaysia Airlines Berhad (MAB) corporate structure. But his tenure at the carrier lasted only 16 months and he was succeeded by Peter Bellew on 1 July.

Bellew hit the ground running, calling for the equalisation of airport charges at Kuala Lumpur International airport, announcing orders for the Boeing 737 Max and finding a solution that removes the Airbus A380s from its fleet.

Network changes made since March 2014 left London as the airline’s sole long-haul destination, with ASKs over a three-year period also reflecting sharp declines. 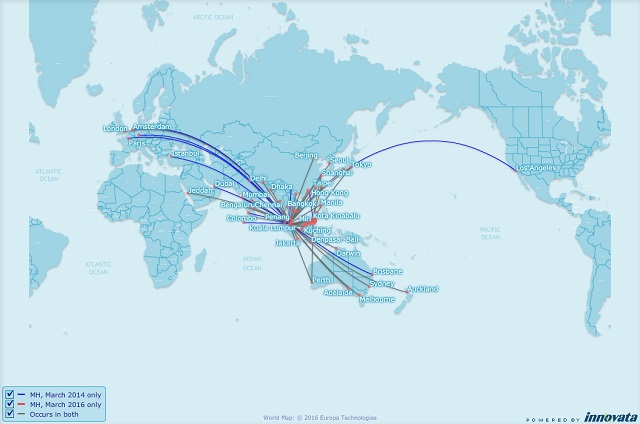 But from 2017, the carrier will resume growth, with China being the key focus.

In the first stage, nine new routes will be launched, with the Kuala Lumpur-Shanghai frequency to be doubled.

Bellew believes that expanding into China is the right decision.

“In 2017, we’ll start off the routes, which includes the direct routes from Penang to Shenzhen and Shanghai, and from Kota Kinabalu to Tianjin. We know this market because in the case of Kota Kinabalu we’ve had many charter operations over the last four years. So China’s the story for us, for the foreseeable future,” he says.

With such a large number of routes to be launched into China, the airline chief thinks business to the country can triple over the next three years. But this level of growth will inevitably mean the airline will face difficulties in securing airport slots and aircraft.

GROWTH WITH THE 737 MAX AND AIRBUS WIDEBODIES

Partly to tackle that problem, aircraft acquisitions were made under the new MAB structure. First, MAB leased six Airbus A350-900s and two A330-900neos in September 2015, followed by an order in July 2016 for up to 50 Boeing 737 Max aircraft.

Of the total, 25 are firm orders for the Max 8, while the remaining options are split between the Max 8 and 9. Deliveries are set to start in 2019.

Besides the 737s, the airline has expressed interest in acquiring more A330s, even secondhand aircraft. Bellew has also said Malaysia Airlines could take 25 A330neos – 15 as replacements for existing A330-300s and 10 for growth.

“I am short on widebody lift,” he says. “I'm trying to source low-priced, good value for money, beautiful Airbus A330 aircraft in a similar configuration to the aircraft we have at the moment.”

As Malaysia Airlines seeks more A330s, it believes it has a solution to the problem of the six A380s that entered service in 2011 and which it has struggled to fill.

After efforts to sell the aircraft fell through, MAB decided to create a special subsidiary that will operate religious pilgrimage flights.

The new carrier, code-named “Project Hope”, will start off with six A380s configured with up to 700 seats, and “should be fully operational by spring 2018” under a Malaysian air operator’s certificate. It will run on sharia-compliant principles including the use of Islamic financing instruments. Interested parties have also enquired about investing in the new carrier.

The eventual plan is to sell Project Hope. Bellew believes it will have a better future in a company that “has a strategic interest in the hajj and umrah business”.

BACK TO THE MARKET… EVENTUALLY

Under the plan laid out by Khazanah, Malaysia Airlines is set to return to the capital market by 2019 through an initial public offering (IPO).

But for that to happen, the airline has to be profitable by 2018, a target Bellew believes is reachable.

He explains that for “transparency reasons” March or September are “the best months” to conduct an IPO, adding that airlines would also have a good amount of sales data on hand, should the relisting be conducted during one of those two months.

Still, the challenges are immense. Competition from the Malaysian low-cost juggernaut AirAsia and its sister company AirAsia X remains as tough as ever, not to mention overseas rivals.

Asked what the carrier needs to work on to ensure that it remains profitable, Belew mentions “details and costs”, being aggressive with sales and marketing, and “doing something different”.

Expectations are high, but Bellew is clearly determined to succeed. He says he has a supportive team, which in turn motivates him.