In James Clavell’s novels about Hong Kong, the Tai-Pans of Noble House are obligated to honour any wish, however unreasonable, of he who produces one of four special broken coins.

After this week’s 2016 results statement, the leaders of Cathay Pacific are probably rummaging through their loose change for coin fragments.

The Oneworld carrier's statement underlined how difficult things have become for the Hong Kong carrier, which finds itself under pressure from forces it can do little about.

“Despite the challenges with which we are faced, we still expect our business to grow in the long-term,” he said in a letter to shareholders.

“Air traffic to, from and within the Asia-Pacific region is expected to grow strongly. We intend to benefit from this growth by increasing our passenger capacity by 4-5% per annum, at least until the third runway at Hong Kong International Airport is open. We will continue to introduce new destinations and to increase frequencies on our most popular routes. We are buying new and more fuel efficient aircraft. This will increase productivity and reduce costs.”

Unfortunately, all the reasons Slosar offers for why Cathay will do well could be offered by most other regional airline bosess: Asian growth story? Check. New destinations? Check. Fuel Efficient Aircraft? Check. Magic coin fragment? Nope.

The plan to raise capacity that he mentions appears to be a continuation of 2016’s strategy, whereby Cathay boosted capacity across its network by 2.4%, only to see load factors fall 1.2 percentage points to 84.5%, and yields crater by 9.2%.

The company’s assessment of its worst year since 2008 focused on two culprits: competition and the strong Hong Kong dollar, which is pegged to the US dollar.

Will Cathay’s competitive environment abate? No.

Will the Hong Kong dollar fall and offer some relief? Harder to say, but rising US interest rates don’t bode well.

The most revealing element in Cathay’s earnings statement was the section dealing with individual market segments. Historically, long-haul international markets were Cathay’s forte, especially back in the days when it was the de facto hub carrier for China.

A key theme Cathay raised was the advent of direct services from mainland China that have cut out the Hong Kong hub. FlightGlobal Schedules data gives some sense of how profound a trend this has become. It is far from clear how an old-school hub carrier operating in a slot-congested airport in one of the world’s most expensive cities can deal with it.

By comparison, China has invested billions in beefing up its airports, and its airlines receive about one quarter of all new aircraft delivered every month.

ASKs out of Hong Kong to key regions, all airlines 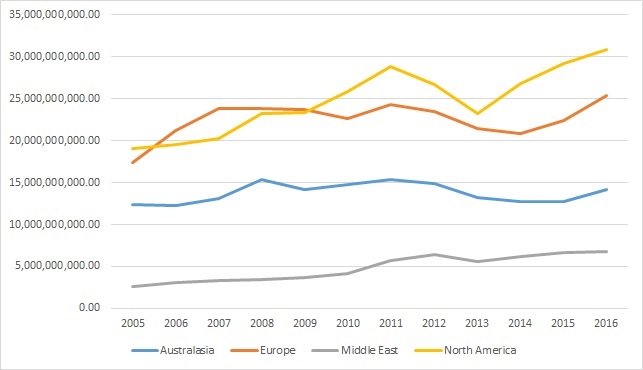 During the same period, direct ASKs by all carriers from China to the last two markets exploded. From 2005 to 2016, China’s USA bound ASKs grew nearly five-fold to 65.4 billion, while China-Europe ASKs more than doubled to 54 billion.

ASKs from China to key international destinations, all carriers 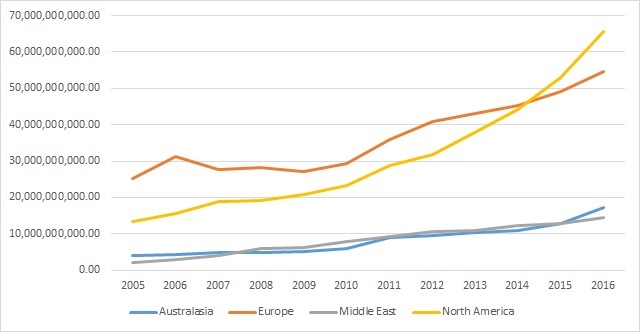 A good deal of this international ASK growth was produced by the big China carriers, which can rely on lower unit costs, government support, and powerful domestic networks.

Chinese passengers have an unprecedented array of options for travelling beyond China, as do travellers throughout the region. Cathay’s challenges represent not just a problem for company management, but for the viability of Hong Kong as a major air hub.