There used to be a saying in aviation that becoming a millionaire was easy: you simply started with a billion. If that maxim is less true in today’s somewhat more financially disciplined airline world, it certainly does not apply to those responsible for building aircraft. The biggest 100 businesses in aerospace are continuing to ratchet up the profits, despite modest revenue growth in the past financial year.

Research carried out exclusively for FlightGlobal for our annual Top 100 ranking shows that operating profits for the 2017 reporting year increased by an average of 14.1% compared with the previous 12 months, against an uptick in turnover of just 3%. That was a slight drop on the 2017 survey, in which the Top 100 improved their operating profits by 17% over the 2015 reporting year on near-static revenues, but continues what appears to be a trend of healthy profitability.

Rising commercial aircraft production rates and a defence market showing signs of life after a near-decade of stagnation will have helped boost profitability. However, the impressive performance across the industry is in the face of intense pressure from Airbus, Boeing and other aircraft manufacturers to cut their costs by squeezing their suppliers.

This may be partly why, after a dismal 2016 financial year, the big two airframers in particular have seen spectacular bounces in their profits, with Boeing 76% ahead of the previous year, and Airbus recording an improvement of 51% – performances that have no doubt helped drive up the industry average. What is more impressive is that both companies had a modest reduction in revenue. 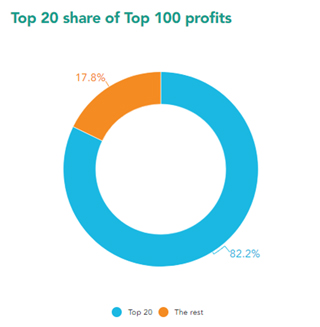 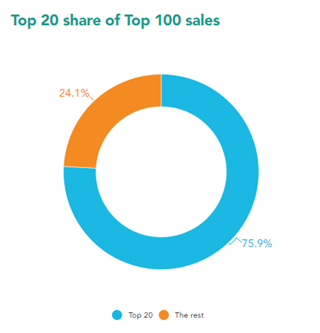 As a result, operating margins at Airbus and Boeing have strengthened over the 2016 figures, with the US manufacturer notching up a solid 11% return in its 2017 results – compared with 5.2% last time. Its European rival, meanwhile, recorded a margin of 5.1%, a hike on the 3.4% in the 2016 financial year.

The biggest 20 companies have also improved on their share of overall profits, indicating that, in aerospace at least, bigger does mean better. Last time, the largest fifth accounted for 78% of profits, and 76.2% of sales. This time, the top 20 were responsible for 82.2% of profits, even though their share of revenues – 75.9% – barely changed from the last survey.

Our Top 100 – again compiled for us by independent consultancy Counterpoint Market Intelligence – ranks companies that derive all or the vast majority of their business from commercial and military aerospace, from Airbus and Boeing as well as specialist manufacturers such as Heroux-Devtek, alongside those who have significant aerospace interests as part of a much larger industrial concern. The latter include corporations such as General Electric and Honeywell.

Where the company concerned has a clearly defined aerospace unit – the likes of GE Aviation – we have only taken that entity into account. Otherwise, using the companies’ own financial reports and other material, we have attempted to estimate what proportion of its revenues each derives from aerospace. Sometimes these sales span several divisions of the company. Occasionally too, these predominantly aerospace divisions may contain revenues from non-aerospace activities, such as naval or communications. In these instances, it is difficult to separate the non-aerospace contribution.

In three cases in the Top 100, there is little financial information in the public domain about the companies’ aerospace activities. Hutchinson is a subsidiary of French oil company Total and is a significant supplier of equipment across airframes, engines and cabin systems; Nordam, a private US company, produces aircraft nacelles, transparencies and business-jet interiors; Precision Castparts is owned by private investment vehicle Berkshire Hathaway. In each case, we have used our own industry knowledge to make an estimate.

We define aerospace as the manufacturing of aircraft or aircraft structures, components, systems or other technologies. We do not include service providers such as those in MRO. However, aerospace manufacturers’ own aftermarket revenues are included, as are MRO companies that carry out highly specialised contracts, deploying their own, engineered products, such as the UK’s Marshall Aerospace.

As is often the case, and as a result of the long-term nature of aircraft programmes and contracts as well as high entry barriers, the Top 100 has a familiar feel with many positions relatively unchanged and only a small number of new entrants, mostly in the bottom reaches of the ranking. Likewise, only a few companies have departed because of merger and acquisition activity or financial performance.

The top end of the ranking is little changed, with the first nine companies remaining in place. Further down, Rolls-Royce, Textron, General Dynamics, Precision Castparts, Spirit AeroSystems, and Rockwell Collins have nudged up, at the expense of Leonardo, L-3, Bombardier, United Aircraft and Embraer, which have slipped slightly.

There are five new entrants in this year’s Top 100: AIDC (ranked 70), Astronics (84), Kaiser Aluminium (85), Lord (98) and Russian Helicopters (32). Lord has moved up from a position just outside the Top 100 last year. The others are in the ranking because they have either grown significantly in recent years, or we have altered our criteria for inclusion.

On that basis, we have downgraded our estimate for Mitsubishi after the Japanese company changed the way it reports its numbers. This year, we have included figures for its new Aerospace, Defence & Space division. Last time, the corporation’s trains and ground transportation business was bundled with its commercial aviation activities, and there was no easy way of stripping it out. We have also changed our AVIC numbers, using AVIC Aircraft rather than AVIC International as we believe this gives a better representation of its aerospace sales.

Five companies have exited the ranking. Spain’s Indra has met a fate similar to Mitsubishi’s, falling just outside the Top 100, because we have revised our estimates for its aerospace sales. Ejection-seat specialist Martin-Baker – 99 last year – has also slipped out based on its latest annual turnover.

Three companies have disappeared because they have been acquired by other businesses in the Top 100 just before the 2017 financial year. US interiors specialist B/E Aerospace became part of Rockwell Collins, Rolls-Royce swallowed up ITP, and LMI Aerospace was taken over by Belgium’s Sonaca.

Other mergers and acquisitions were either too late for inclusion in this survey, or are still in train. Rockwell Collins’ own absorption into United Technologies is awaiting final regulatory approval. The coming together will create a $37 billion aerospace business within the US industrial group with the combination of engine maker Pratt & Whitney and the new Collins Aerospace Systems (which will comprise Rockwell Collins together with United Technologies Aerospace Systems – the former Goodrich and Hamilton Sundstrand units).

Meanwhile, Safran’s long-running acquisition of fellow French manufacturer Zodiac was completed earlier this year, but Zodiac’s latest financial figures are, for the last time in the 2018 survey, reported separately, with the interiors specialist ranked 24th. The combined revenues, creating a business with sales nudging $24 billion, could see the enlarged Safran – ranked number eight – nudge closer to seventh placed Raytheon in next year’s listing.

Similarly, Northrop Grumman’s acquisition of space and defence specialist Orbital ATK this year will cause the military systems giant to rise up the rankings with sales of around $30 billion. Orbital is becoming Northrop’s fourth division – Northrop Grumman Innovation Systems – but for the moment it remains ranked 28th in the latest Top 100 with sales of $4.76 billion.

Spirit AeroSystems’ takeover of Asco Industries, announced earlier this year, is less significant. The Belgian aerostructures specialist is placed 93 in the Top 100 and its $412 million revenues in 2017 will have a modest impact on the standing of the former Boeing business, which is ranked 18th with a turnover just short of $7 billion. However, at that part of the table, differences in revenues of less than $1 billion separate many of the companies.

The size of the billion-dollar club – Top 100 companies with revenues exceeding that figure – stays the same. Last year, 64th-placed RUAG was the lowest-placed business to hit the billion-dollar mark. This time, the same number of companies surpass a $1 billion turnover, with Cytec Solvay the last to make the cut.

For the purposes of the survey, we measure companies’ year-on-year performance based on the currency in which they report. This mitigates the distorting effect of fluctuating exchange rates against the dollar, and creates, we feel, a more accurate reflection of each business’s activity in the financial year. So if a company grows its turnover from £1 billion to £1.1 billion, we record this as a 10% sales growth, even though the difference may not be the same when both figures have been converted into the US currency for each year.