If departing EasyJet chief executive Carolyn McCall is replaced by a man in the top role at the UK low-cost carrier later this year, it will cut by a third the number of female leaders at airline groups that featured in Flight Airline Business's recently published ranking of the top 100 by revenue.

The only other female chief executives in this year's rankings are Thai Airways International's Usanee Sangsingkeo, who is acting president there, and VietJet Air's Nguyen Thi Phuong Thao. 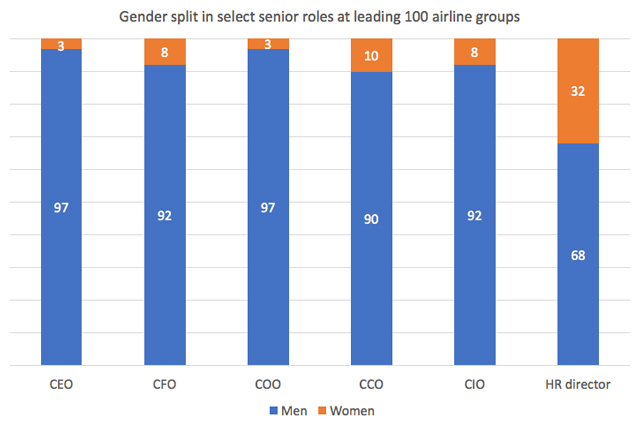 Source: Company websites and financial reports, and FlightGlobal data. Notes: Similar roles of equivalent seniority considered where specified job titles are not used. Covers the airline groups in FlightGlobal's ranking of the top 100 by revenue

As this is the first time FlightGlobal has conducted this survey, there is no indication of whether the number of women employed in senior roles at airline groups is rising or falling. But today's gender split undoubtedly reflects an uncomfortable reality for anyone who believes in the importance of diversity at the top levels of management in the industry.

By way of comparison, accountancy firm Grant Thornton publishes an annual global study of women in leadership roles at mid-sized companies in the wider economy, surveying 10,000 businesses. Its 2017 report shows that 12% of businesses had a female chief executive. Among UK FTSE 100 businesses, about 7% were led by a woman as of May this year, while in the USA 5% of S&P 500 firms had a female chief. 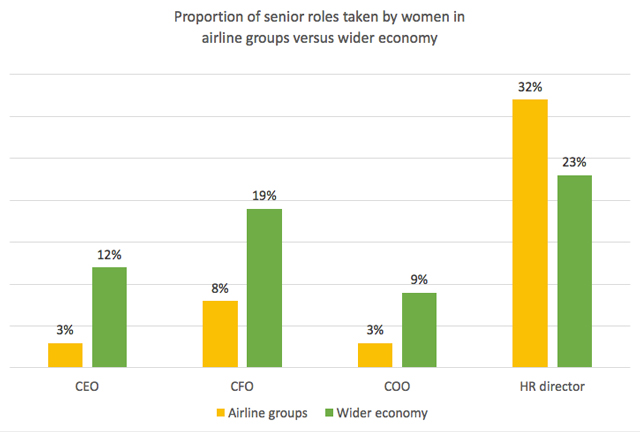 Only at four groups did three of the six roles go to women: Cebu Pacific Air, EasyJet, Southwest Airlines and VietJet, although the Vietnamese carrier's total includes former chief financial officer Yvonne Abdullah because no replacement has been named. No group had female executives in more than three of the roles.

In absolute numbers, 600 roles were surveyed across the top 100 airline groups; just 64 were taken by women, or 11%. Removing the HR director function from the survey halves the number of women, to just 32 of 500 roles, or 6%.

Female representation in the chief financial officer role is only slightly better than in the top leadership position. Eight of the airline groups in the top 100 have a woman in the finance job, but that figure could drop when VietJet names Abdullah's replacement. Grant Thornton's survey puts the wider-economy average at 19%.

AirAsia Group employs Pattra Boosarawongse as chief financial officer, while Southwest is the highest-ranked business with a woman in that position; Tammy Romo took on the role in 2012, replacing another woman, Laura Wright.

Just three airline groups in the top 100 employ a woman in the role of chief operating officer or its equivalent.

EasyJet is the highest-ranked airline group with a female chief operating officer. The incumbent, Chris Browne, is being tipped in some quarters as a replacement for McCall when she leaves the role of EasyJet chief.

There is a higher number of women in the chief commercial officer role, or equivalent: 10 within the top 100 airline groups.

Women are in the chief information officer role – or equivalent head of IT/digital function – at eight of the top 100 airline groups. Grant Thornton does not supply specific wider-economy data for this function, but a Harvey Nash/KPMG CIO survey from earlier this year shows the wider-economy figure as 9%.

North American carriers have a relatively high proportion of female chief information officers, but they still take the role at only four of the region's 19 airline groups in the top 100 ranking. Maya Leibman (pictured below) holds the CIO position at the airline group that tops the ranking, American Airlines. United Continental, Southwest and Alaska Air Group also have women in that role. 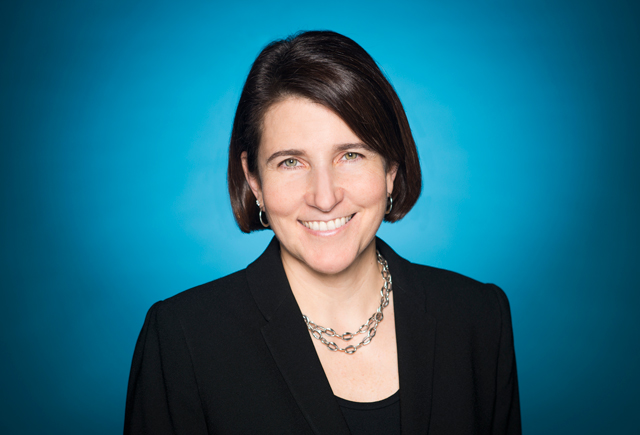 The only role where airline groups beat the wider-economy survey is human resources director or the equivalent position. Some 32 of the top 100 airline groups have a woman in that role, compared with 23% in Grant Thornton's study.

Additionally, the HR director category supplies the only meaningful metric in FlightGlobal's survey where women are in a majority: for the 19 North American airline groups in the top 100, women take up the role in 10 cases and men in nine. Europe is not too far behind, with women employed in the role by 13 of the region's 28 groups.

The airline group at the top of the ranking – American – again has a woman in the role: Elise Eberwein as executive vice-president of people and communications.

In Asia-Pacific, women take up the HR director role in five of the 33 airline groups in the top 100. At 15%, this marks the only time the region goes into double figures in percentage terms across the six job roles surveyed.

Looking at business models, the overall difference in gender balance between low-cost and legacy operators in the six surveyed roles is negligible, and is harder to judge at airline group level because some businesses, such as IAG and Lufthansa, incorporate low-cost airlines alongside legacy carriers. It is worth noting, however, that the industry leaders as regards women at senior level are all low-cost operations: Cebu Pacific, EasyJet, Southwest and VietJet. 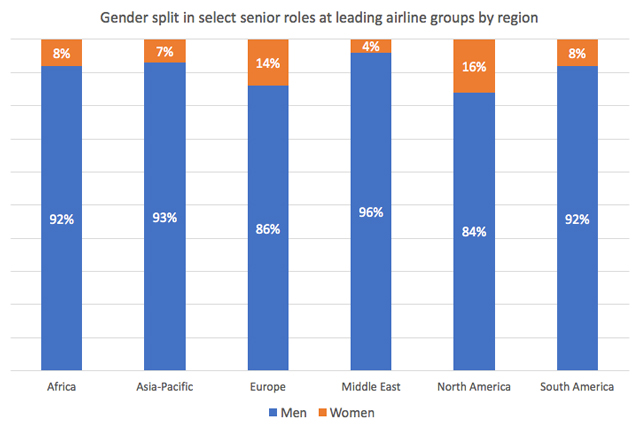 Splitting the survey by region highlights some differences in gender diversity, although they all lag trends in the wider economy.

In Africa, only four airline groups made it into the top 100 ranking by revenue: Ethiopian Airlines, South African Airways, Royal Air Maroc and Kenya Airways. Two of the 24 positions assessed across those businesses, or 8%, were taken by women. SAA accounts for both of those positions: chief financial officer Phumeza Nhantsi and general manager of operations Zuks Ramasia. Therefore, three of the businesses had no women employed in any of the six roles. However, Royal Air Maroc does employ a female deputy chief executive officer: Habiba Laklalech.

Asia-Pacific accounted for 33 of the airline groups in the top 100 ranking. Of the 198 roles surveyed, 14 were taken by women, or 7%. Thai Airways International and VietJet (Thao, pictured below) are notable as supplying two-thirds of the total female chief executives in the entire top 100. But despite Cebu Pacific joining VietJet with a 50:50 male-female split in the six surveyed roles, the region as a whole shows a lack of diversity: 24 of the 33 businesses employed men in all six positions. 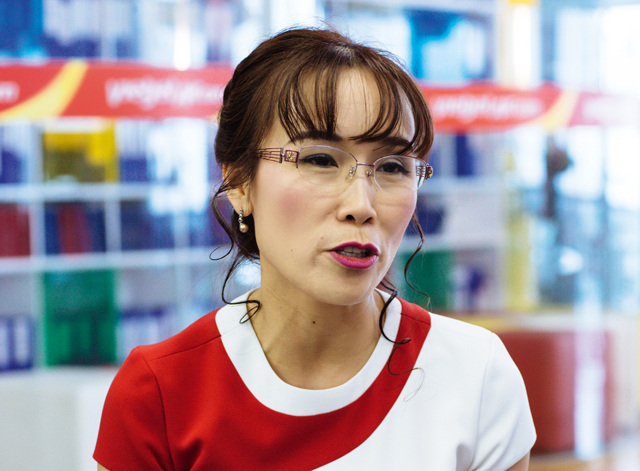 Europe accounted for 28 of the top 100 airline groups. Of the 168 roles surveyed, 24 were taken by women, or 14%. The position of HR director accounted for 13 of the 24 women. EasyJet's McCall was the only female chief executive, while TAP Portugal and Russia's S7 have the region's two female chief financial officers: Teresa Lopes and Svetlana Yuryevna Kapitanova respectively. Some 13 of the 28 businesses surveyed did not have a woman employed in any of the six roles.

In the Middle East, eight airline groups featured in this year’s top 100 ranking. Of the 48 roles surveyed, just two were taken by women, or 4%: Asma Humaid Al Ghabshi is vice-president of human resources at Oman Air, and Dganit Palti is vice-president finance at El Al. This means six of the eight businesses surveyed did not have a woman employed in any of the six roles.

Meanwhile, the North American region accounted for 19 of the top 100 airline groups. Of the 114 roles surveyed, 18 were taken by women, or 16%. Of those, 10 were in HR director positions. Of the most high-profile positions, Southwest and Hawaiian Airlines both have women in the chief financial officer role: Tammy Romo and Shannon Okinaka, respectively. Seven of the 19 businesses had men employed in all six roles.

In South America, eight of the region's airline groups made it into the top 100 ranking. Of the 48 roles surveyed, four were taken by women, or 8%. Silvia Mosquera Gonzalez leads commercial activities at Avianca Holdings, while the other three women are in HR director positions: Ana Maria Rubio at Avianca Holdings, Vidalia de Casado at Copa Holdings, and Grace Annab at Volaris. Five of the eight businesses did not have a woman employed in any of the six roles. LATAM Group does, however, employ Claudia Sender – former president of TAM Airlines – as its senior vice-president of customers.

Meanwhile, there is a mixed picture in terms of female chief executives within the individual units of leading airline groups and those outside the top 100 rankings.

In the Middle East, which had the poorest gender mix among the top 100 airline groups, Iran Air in July confirmed the appointment of Farzaneh Sharafbafi as its new chief. That carrier did not have sufficient revenue to feature in the top 100 list this year, however. Gulf Air, another operator outside the top 100, employs Sahar Ataei as chief financial officer.

Similarly, outside the top 100, UK regional operator Flybe has Christine Ourmieres as its chief executive, while two African carriers have women in the top role: Mandi Samson has been acting managing director of Air Namibia since 2015 and Sauda Rajab leads Tanzanian operator Precision Air. In the Caribbean, LIAT named Julie Reifer-Jones as chief executive in early August this year, more than a year after she stepped into the role in an acting capacity. 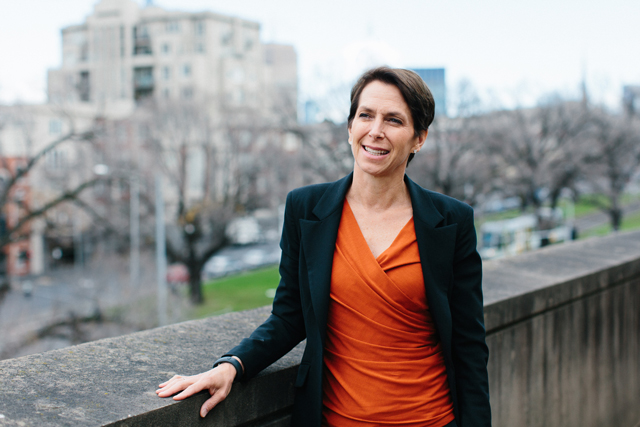 If you drill down into the airline groups, there are women in chief executive roles at some carriers, including two relatively long-serving examples: Aireen Omar heads AirAsia, while Jayne Hrdlicka (pictured above) leads Jetstar Group within Qantas. In South America, Copa Holdings last year appointed Catalina Breton to lead its budget arm Wingo.

Several women have dropped out of chief executive roles in recent times. They include Kuwait Airways' Rasha al Roumi, who resigned in April; Aerolineas Argentinas chief executive Isela Costantini, who left the role in December last year; and the head of Chinese budget carrier Spring Airlines, Zhang Xiuzhi, who stepped down in April last year. All three were replaced by men.